Mahindra has finally launched the much awaited Mojo. But to makes space for itself in the market, the Mojo will have to hold its own against some stiff competition like the KTM 200 Duke, Honda CBR250R, and the Royal Enfield Classic 500. 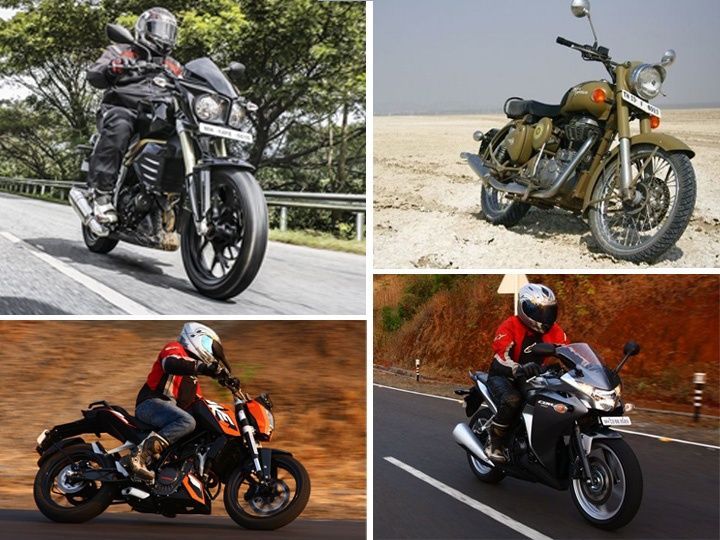 Earlier this month, when we got our hands on the Mahindra Mojo it was clear that the bike’s dynamics would suit the touring junta. Comfortable riding dynamics, a decent powerplant and a large 21-litre tank – are all characteristics of an able touring machine. But then for an enthusiast there are a lot of options in the market that serve the same purpose, the KTM 200 Duke, Honda CBR 250R and the Royal Enfield Classic 350. So where does the Mahindra Mojo stand against these?

1.)    Engine: First things first, the heart. The Mahindra Mojo is powered by a 295cc single cylinder unit that makes 28PS and 30Nm. The power plant has a strong mid-range which makes it ideal for highway cruising. This engine comes mated to a 6-speed gearbox. The Mojo tips the scale at 160kg but we feel some of the weight could have been reduced by using a single exhaust instead of a twin.

The KTM 200 Duke – although it displaces just 199.5cc - makes almost as much power as the Mojo. At 19Nm though, the torque rating isn’t as high. It must also be noted that the 200 Duke produces its peak power and torque a lot higher up the rev range than the Mojo. While the overall figures of the KTM are similar to the Mojo, it gains an edge in terms of weight. At 136kg, the KTM 200 Duke is 4 kg lighter than the Mojo.

Although the Royal Enfield Classic 500 isn’t quite the same segment as the others in this comparison, it is priced at around the same mark. Moreover, considering we are looking at touring machines, the Royal Enfield Classic 500 is one of the much loved offering in this price bracket. So here goes... The RE Classic 500 produces 27 horses of power from an engine displacing 499cc. But the highlight of the motorcycle is in its torque rating. The Classic 500 churns an insane 41Nm of torque which is considerably higher than all its rivals in discussion. However it must also be noted that the 190kg Classic 500 is the heaviest in this comparison.

2.)    Features: Apart from the Royal Enfield Classic 500, all three motorcycles come with a disc brake at the front as well as at the back. The Mojo and the 200 Duke also gain some brownie points as they are fitted with upside-down forks up front. The CBR 250R and the Classic 500 on the other get standard telescopic front forks. Of the four bikes, the Classic 500 is the only one that doesn’t get a monoshock setup at the back.

The Mojo gets a semi-digital console that displays a lot of information. It can track your 0-100kmph time, record your top-speed aside from the standard speedo, tacho, and tripmeters. The CBR 250R too employs a semi-digital console but isn’t as informative as the one on the Mojo. Moreover the digital screen is pretty small and can get difficult to read. The KTM 200 Duke uses an all-digital console. It has all the standard information that one would expect and a shift light, something that is missing on all the other bikes. The Royal Enfield Classic 500’s analog cluster is the least informative of the lot. It doesn’t come with a tachometer or even a trip meter. In fact, it even misses out on a fuel gauge.

The KTM 200 Duke is the only bike to get ABS as standard fitment. While the CBR 250R does get it as an optional fitment, the Mojo and the Classic 500 don’t even offer it as an option.