For Indian motorcyclists, going electric has been all about ecology and economy. Could Ultraviolette’s F77 bring excitement into the mix? 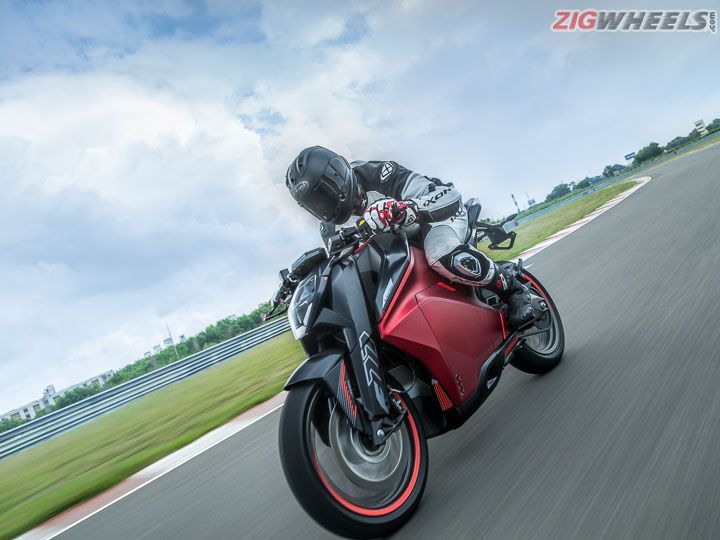 Should you buy the Ultraviolette F77 right now? The answer isn’t there in the paragraphs that follow. That’s because the F77s we rode around the MMRT in Chennai were prototypes. Slick and polished to look at, and ready to be ridden, but these examples were by no means showroom-ready. Also, because you can’t get one right now. The F77 will be launched in October 2020 -- and until then the motorcycle and its various aspects will continue to evolve from what we experienced, some of which need more than just finishing touches. But should you be keeping an ear out and your eyes peeled for this electric motorcycle that is promising to bring excitement into a genre that touts smart and green as their core virtues?

What’s in a name?

The team at Ultraviolette is a bit nutty about fighter aircrafts, and some of them have even worked in that domain. F22, F35 are names that are spoken lovingly and explains the F in the F77. The first 7, much like in fighter aircraft, stands for the generation of the craft and points out that there were six other motorcycles developed and shelved but led to the birth of the motorcycle we see here. The second 7 tips its hat to the seventy Amperes of current that runs through its veins. Interestingly, each of the first 100 bikes will be collectors editions with special designs and materials that salute the iconic aircraft. You can read more about that here.

It’s electric, so as you fly past, passerbys will hear nothing more than the whine from the electric motor. The rider, though, gets an earful of clink-clank as the X-ring chain slaps around. A few minutes into the ride, the more expensive belt drives start to look very appealing and more fitting for the smooth and quiet electric drive!

It does look appealing!

If you are talking about the F77, damn right. In pictures it looks a bit pregnant and odd, but when viewed in the flesh there are no such problems. The lines and scoops on the sculpted panels look good. However, to adjust the preload on the rear shock requires the removal of the seat and the side panels. But the team at Ultraviolette say the issue will be resolved before production. Similarly, the Apache-sourced switchgear will be replaced by a bespoke setup that includes switches for opening and closing the motor-operated battery bay that flips open from under the “tank.”

The face is dominated by the smooshed-in headlamp with chunky LED DRL elements that create its signature look. Also, the F77’s KTM RC-esque vibe isn’t a figment of your imagination, as the chassis geometry is actually shared with the RC. The sharp rake and trail and compact wheelbase give it that pointy tail section which wears split LED tail lamps. So it looks good and has promising genetics -- time to get on track!

You would expect an EV to feel heavy and a bit cumbersome. The F77 is neither. The 158kg claimed kerb weight is over 10kgs lighter than an Apache RR310! If anything it can be accused of being a touch too quick and flighty. Factor in the claim that each wheel is a kilogram lighter than the KTM, the wide handlebar and the rear-biased 49:51 weight distribution and it seems to make sense. The F77 moved around a bit as it hit some bumps while leaned over, which some riders could characterise as playful and the others as nervous. However, Ultraviolette intends to tweak things further.

What else will you have to get used to?

Racer bois will notice that a bit of an extra nudge is required when slamming the F77 from one side to the other. This nudge is required at the top of the transition, almost as if the bike needs a gentle reminder that it has to drop down the other side. Which, once reminded, it does willingly. The F77’s trellis frame is designed differently to accommodate the battery pack and motor, which has made it longer, resulting in a shorter swingarm. However, this tendency is likely to be because of a lower centre of gravity.  If that sounds confusing think of how adventure bikes with high CGs handle, and reverse it. Makes sense now?

I can handle it.

Sure you can, and the F77 does handle. This is a trait, and this odd grumble also highlights another very crucial aspect about the F77: it feels utterly natural to ride. The absence of a clutch and gears felt a bit worrying when sitting in the pitlane, but out on the track the F77 put me at ease immediately. The calibration of the throttle was butter smooth, and the torque delivered by the motor satisfyingly urgent to let you power quickly through the bends.

The F77’s 33PS of power and 158kg of kerb weight places it in the turf of its distant cousin, the TVS Apache RR310. Ultraviolette claims getting to 60kmph or 100kmph will take 2.9 seconds and 7.5 seconds, which is right in RR territory. But on long open straights, the DC motor’s inherent weakness becomes apparent as the torque tapers quite obviously when it revs past its 7000rpm sweet spot, eking its way up to the 9000rpm mark. Close friends on petrol-powered 300cc or 250cc motorcycles won’t miss the opportunity to wave cheekily as they ride past. Ultraviolette say they are aware of the performance deficit and would look at dialling up the output to 30kW before launch.

Work to be done, yeah?

Yes. For instance, there are three modes on offer - Eco, Sport and the Insane mode - but we only sampled the Sport mode. Insane mode is said to make the throttle response sharp and urgent. In the finished product the rider will also be able to change the amount of regenerative braking dialled in by the motor, to mimic engine braking. For now we had to rely only on the strong and feelsome ByBre brakes to slow things during corner entry. However, the ABS hadn’t been engaged as calibration and testing was still pending. Interestingly, being an electric motorcycle, traction control is a possible addition to the feature list by launch! Then there’s the connected technology that will allow you to check your ride data, alter the ride modes and even check the charge state from your phone. But that isn’t ready yet.

Right, what about range?!

Ultraviolette’s claimed 130-150km range would surely have shrank when being thrashed around a test track. However, we could not track the consumption as the batteries were changed frequently on the test bikes to ensure peak performance. Ultraviolette claim that fast charging will allow you to go from 0 to 100 per cent charge in 1.5 or 5 hours, using a fast or standard charger respectively. The cool bit is that the removable batteries can be charged at home and you could buy extra batteries to swap around if you felt the need for it. Prices of the batteries are yet to be finalised though.

October 2020, that’s when Ultraviolette plan to start deliveries of the F77.  While there’s much that needs to be finished on the F77, there’s no doubt that it is a promising motorcycle. One that can bring excitement to the world of electric two-wheelers in the Indian market. A year is a long time to wait and a lot can change in the time being, especially in the increasingly competitive mid-displacement class that the indicated Rs 3 - 3.5 lakh price tag will slot the F77 into. Hopefully, when the F77 arrives smart, green, practical and exciting will all be rolled into one sizzling package. We’ll wait too.