We had ridden the TVS Apache RTR 200 4V and came back impressed; now let us find out how it performs in real world conditions 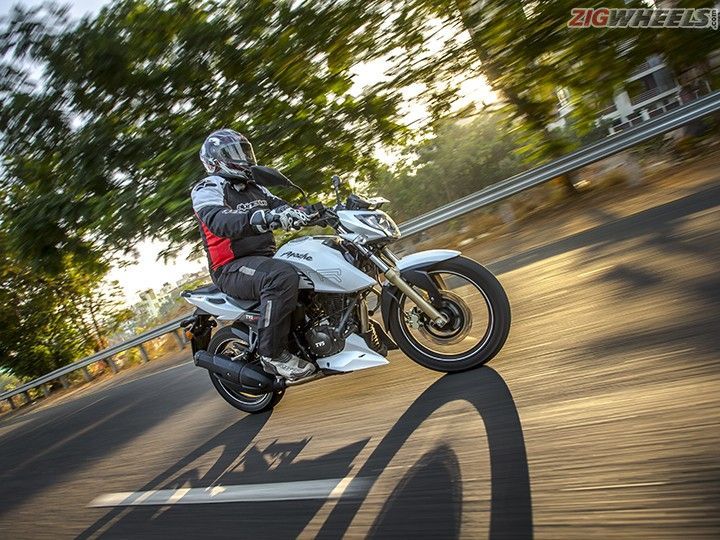 If there is one name that has made an impact in the entry-level performance bike market in India after the Bajaj Pulsar, it has to be the TVS Apache RTR. The Hosur based two-wheeler giant had launched the Apache RTR 160 in 2006 to take on the Pulsar 150 which was the segment benchmark and still rules the roost with respect to sales. TVS had upped the ante few years down the line with the launch of the Apache RTR180 and also introduced it in ABS avatar making it the cheapest motorcycle in the country to get ABS as an optional extra. But in the past few years, the Apache brand hasn’t got the push that it needed given the fact that rival brands had introduced new products and slowly the Apache magic was fading. Gladly though, TVS Motors took stock of the situation with the launch of the new Apache RTR200 4V with cosmetic and mechanical updates to take on its competitors.

One look at the new TVS Apache RTR 200 4V and you wouldn’t mistake it for anything else but a Apache as the basic design language has been maintained. But the overall styling is sharper, leaner and focussed. A great example of the above is the headlamp which chucks the bikini fairing and windscreen for a floating instrument console above the edgy headlamp. The party piece is the boomerang shaped LED DRL’s that caught the fancy of many fellow bikers at traffic signals.

The mass forward design language has been accentuated by the sharp tank extensions while the off-set fuel filler cap hints at a bit of BMW design influence. Overall design of the TVS Apache RTR200 4V is sharp, chiselled and likeable. It gets an all-digital instrument console which is loaded to the brim with a lap timer, acceleration timer, fastest speed recorder, service indicator and gear indicator. Despite the tonnes of info the display panel has been neatly laid out and it’s easy to read on the go. The large switch gear is ergonomically positioned and they reek of quality and the same implies to the overall fit and finish which is among the best in segment.

Special attention was focussed on the new 198cc displacement powerplant. The oil-cooled, single-cylinder motor develops 20PS at 8,500rpm and 18.1Nm of torque at 7,000 rpm. There are two engine options on offer – fuel injected and carburetted (our test bike was the latter). Push the starter and the motor comes to life with a good throaty note on idle. The first thing that you will notice with the new engine is the brilliant refinement which is a stark contrast to that of the Apache RTR180. Acceleration of the bike is good with a strong mid-range that is handy while overtaking on the highways. Cruising at triple digit speeds felt effortless with good amount of punch being delivered from the motor. Vibes can be felt near redline and also the clutch felt extremely heavy which is disappointing.

The 5-speed gearbox performed well but they don’t feel crisp like its Japanese rivals. Its direct rival is the Bajaj Pulsar 200NS but given the fact that it has been discontinued, its closest rival with respect to displacement and pricing is the Pulsar AS200. The Bajaj offering has additional 3PS and an extra gear which means that it will have a better top-end than the new motorcycle. While the weight difference between both is 5kg with the Pulsar being the heftier one. Talking about fuel efficiency, the TVS Apache RTR200 4V returned us an overall figure of close to 52kmpl which is really impressive given the performance on hand. But the above was achieved while riding the bike sedately, a difficult task given the engaging performance on tap.

The TVS Apache RTR 200 4V employs clip-on handle bars with mildly rear-set footpegs. The riding posture is sporty yet comfortable as the rider isn’t leaned forward similar to suspersport machines. Also the well contoured tank enables the rider to snugly hold it with his thighs. Another aspect where the new motorcycle hugely impresses is the handling department. The bike feels confident and natural through the corners and will paste a wide grin on the riders face whenever a corner approaches. Also the optional Pirelli tyres which provide better grip than the stock TVS Remora rubber played their part to perfection.

The bike feels confident and there’s no mid-corner wallow as seen on its smaller siblings. In cityscape also the bike impressed us with its agility as I carved my way through the dense Mumbai traffic without any hassle. Despite the likeable handling dynamics, the ride quality hasn’t been compensated for. The new motorcycle is the first TVS offering to get equipped with monoshock suspension system and it dismissed bumps and undulations with authority. Braking is done by disc brakes on both the ends and they do a fabulous job of shedding speeds with good bite and feedback. ABS hasn’t been provided yet but will be offered soon as an optional extra.

The long delay meant the TVS Apache RTR200 4V was under tremendous pressure to deliver and it has managed to do that exactly. The improvements have been made at the right place to make the new motorcycle a likeable proposition. Good performance and handling dynamics along with the sharp styling will attract the young buyers. While the comfortable riding posture along with supple ride quality will play a key role in expanding its target audience. Then there is the long list of features in addition to the engine and tyre options (8 different variants when you include the soon to be introduced ABS option) mean that that the buyer can pick a bike based on his budget and preference.