In terms of price the new Bonneville T100 sits right in between the Street Twin and the Bonneville T120. Does it also blend the easy going Street Twin’s nature with the long legged feel of the T120? 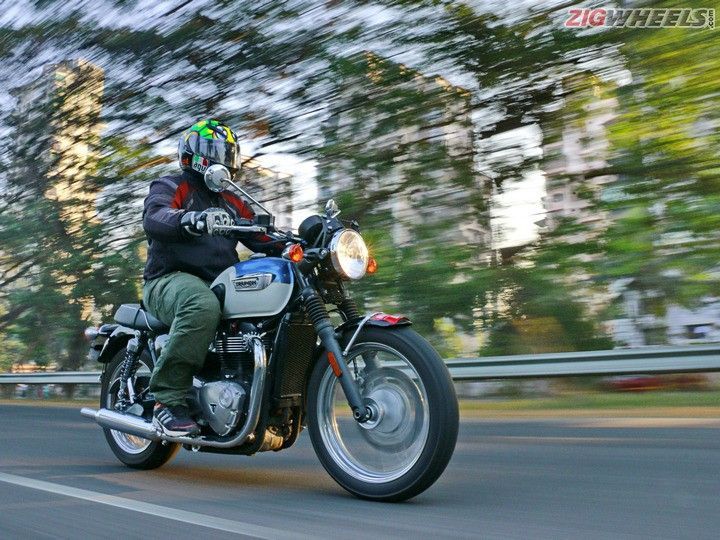 If I were to ask you to think of one bike from the Triumph Motorcycle range, there is a high possibility that the Bonneville name would have come to your mind first. Born in the early 1960s, the Bonneville range has been at the heart of this British brand. In the all new Bonneville line-up each model has had a distinct nature and a space carved out all to itself. The entry level Street Twin is an easy to ride runabout for the city and for newbies. While the T120 is also an easy going machine, it is a more meaty motorcycle apt for those looking to wander further. Now, the new T100 is the latest entrant into the Bonneville family and sits right in between its Bonneville siblings. So who is the T100 for? And does it justify the premium over the Street Twin? Let’s find out…

Bonneville enthusiasts would have had to make a few adjustments with the Street Twin, it is that it didn’t look substantial enough for a big bike, and that it looked more neo, and less retro. One thing is for sure - the T100 is for those looking for the old-world feel expected of a Bonneville. With its classical lines, the Triumph Bonneville T100 is a beautiful looking motorcycle. Our test bike was dressed in hues of blue and white that increased its retro appeal further.

The classical round headlight looks good but doesn’t get LED DRLs as seen on the T120. The larger 14 litre tank also adds to the mass, while the rubber tank pads and the Triumph plaque on it look neat. The T100 also uses a longer wheelbase than the Street Twin, with a longer seat, and it all helps to make it look more sizeable. Peashooter pipes add a bit of bling, while the LED tail lamp signifies its modern nature. Fit and finish, along with paint quality is impressive.  The classical styling of the Bonneville T100 is similar to the Ray Ban aviators; timeless and never out of fashion.

Unlike the Triumph Street Twin, the T100 has a twin-pod instrument cluster with a large speedometer and tachometer. There’s also an LCD screen displaying details like fuel gauge, real-time efficiency, distance to empty, gear-position indicator, odometer, clock and two trip meters. Switch gear is also ergonomically laid out and is of good quality, while the handgrips are comfortable to hold. While it might look old-school from the outside, the T100 gets modern features like switchable traction control, ABS and a USB port. The two features that it misses out unlike the Bonneville T120 are ride modes and heated grips.

The motor on the T100 is the same unit as seen on the Street Twin. The 900cc, parallel-twin motor delivers 55PS and 80Nm of peak torque that is made available at just 3,230rpm. The liquid cooled engine looks classic as it retains cooling fins while packaging the radiator discreetly between the chassis rails.  Thanks to this torquey nature, the T100 chugs along without knocking even if you are riding a gear or two higher than necessary. The powerplant is very refined and there are hardly any vibes at idle. Open the throttle and the bike gathers momentum at a brisk pace. Acceleration isn’t violent but the engine packs a punch with the low-end torque coming in handy. We managed to clock 0-100kmph in 6.1 seconds.

The engine feels tractable while riding in the city but heat dissipation is poor and is the only chink in an otherwise well engineered motor. The 5-speed gearbox works with precision and offers crisp gearshifts. The sweet spot for the motor is between 90 and 100kmph, during which the bike feels as though it is wafting.

But just like on the Street Twin you miss the 6th cog on the highway. The motor feels refined till 4,000 rpm, after which few vibes set in through the handlebar and footpegs. So, if you intend to spend more time on open roads, then the bigger-engined T120 makes more sense. The Bonneville T100 is a bike which eggs you to cruise and enjoy the vistas, rather than scorching the tarmac. And while you are at it, the peashooters offer a deep, bassy exhaust note that makes the experience very special.

The twin-tubular frame of the T100 is the same as seen on the T120 while the rake angle is slightly more than the Street Twin. Despite the above, the T100 feels nimble to ride in the city. The telescopic front forks and the twin shocks at the back do a great job of soaking up bumps. But at high speeds the bike tends to feel a bit harsh over bumps as soft suspension tries to keep the all the weight in check.

Swing a leg over the seat and the rider is welcomed by a comfortable riding posture owing to the slightly curved back handlebar, centre-set footpegs and generous saddle. It also makes cruising on the highway effortless.  The T100 also has a longer wheelbase for some added stability. The longer swingarm also allows for a longer seat to be packaged in making more room for a pillion.

The Bonneville T100 isn’t a motorcycle that you will go corner hunting with, but the bike feels composed on flowing sweepers and the front doesn’t feel heavy like the T120. However, the footpegs ground very easily, thereby restricting the lean angle.  Braking hardware of the T100 is shared with the Street Twin. The front disc brake offers good bite, but the rear feels dead, while the ABS performs aptly. Talking about braking performance, the T100 took 17.08m to come to a standstill from 60kmph and 31.26m from 80kmph.

The Triumph Bonneville T100 is one of the few premium bikes that can be used as a daily runner. Yes it weighs 213kg, but it feels well distributed. Now, while the Street Twin’s 750mm saddle has made it very welcoming for short riders, the seat height on the T100 is higher, at 790mm. On paper, the difference looks great, but in reality, the bike isn’t too tall for shorter riders, while not being cramped for taller riders.

In our efficiency runs, the Bonneville T100 returned us 21.3kmpl in city and 24.36kmpl on the highway which is impressive. Also the large 14-litre tank (Street Twin has 12 litres) means that one is looking at a range of around 320km without stopping for a fuel break. The flat and wide saddle is pillion friendly which is a rarity in performance bikes. Also, the torque assisted clutch makes riding in stop-and-go traffic effortless. There are some short comings though, like the scorching heat from the motor can make it a and the lack of grab rail means that pushing the bike out of parking or on a slope is tiresome.

The Triumph Bonneville T100 is among the most practical performance bikes that is on sale in the Indian market. It is a great option for someone who finds the Street Twin a bit too small and modern with respect to its design. At Rs 7.78 lakh (ex-showroom Delhi), it is priced at a premium of Rs 78,000 over the Street Twin.

So is it worth the extra cash? The answer is yes, as the T100 offers you an authentic Bonneville experience with its classical styling while packing in everyday city usability too. A small bonus is that the T100 is just that little bit better suited for long highway stints. So, in the end, the Triumph Bonneville T100 doesn’t just sit between the Street Twin and the Bonneville T120, but dishes out a charming, enjoyable and practical mix of what that they have to offer.