Which is the better retro roadster on sale in India? 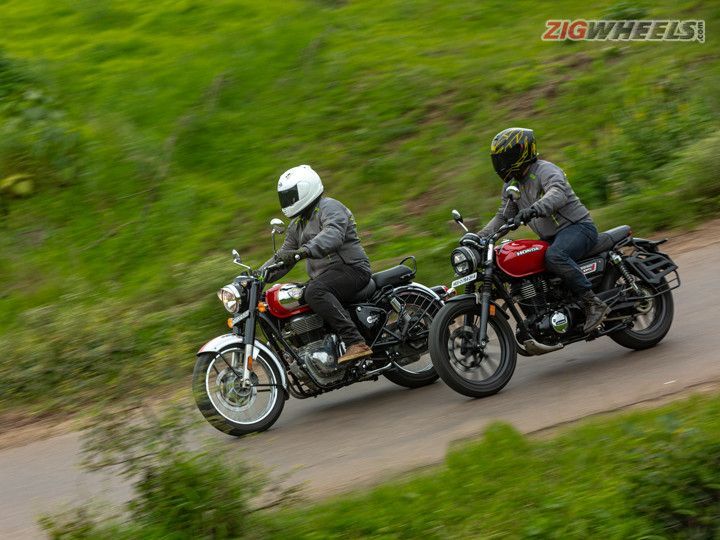 We have witnessed a lot of action in the retro roadster segment over the last couple of years and there's a good reason for it. Royal Enfield had shown the world that there are buyers for this segment of motorcycles and despite the high asking price, Classic 350s flew off the showrooms and sales skyrocketed. RE had a free run for a while but with the advent of new competition, it had to strike back.

Of all its rivals, the most significant has been the Honda Hness CB350. It was the Japanese two-wheeler giant's take on a retro roadster for India and it had comprehensively outclassed the Classic 350 UCE. For 2021, Royal Enfield updated its most cherished motorcycle after a decade and brought the new Classic 350. Is Royal Enfield back with a vengeance or has Team Red got themselves covered? This will be an epic battle.
PS: We compared the 2021 Classic 350 against the CB350RS as the Hness media unit wasn’t available and the CB350RS is basically the same bike with a few cosmetic distinctions.

As you can see the Honda’s motor was inspired from the Classic 350’s UCE motor and is a long stroke motor. The 2021 Classic 350 receives the new J-platform 350cc motor that we first saw on the Meteor 350. In terms of numbers, the Honda CB350 leads and that does translate into performance figures as well. The lower kerb weight and extra grunt from the engine is clearly visible in our acceleration numbers as the CB350 has a healthy advantage.

So, the Honda should be the clear winner, right? Well, not exactly and the reason is usability. The tall gearing of the CB350 means that one has to constantly ride the bike in the right gear otherwise the motor feels bogged down. An example of this is when you go over a speed breaker in second gear: unless you modulate the clutch it might stall.

Yes, the Honda has a featherlight clutch action which can be operated with just one finger, but your fingers are constantly modulating it and this can be taxing while riding in traffic. However, if you want a roadster to hustle through traffic and don’t mind working the motor, the Honda CB350 is up for the task.

The RE Classic 350 doesn’t have the sheer grunt of the Honda, but the wave of torque in the low and mid-range means that you can ride it a gear higher and still not worry. Open the throttle and the bike just chugs and this relaxed nature also does not fatigue the rider too much. Gear shift quality on the new Classic 350 has improved a lot but it still doesn’t match the consistency of the CB350.

The same tale continues on the highway as well for the Honda as the fifth gear is too tall and is only useful to sustain speeds, the moment you roll off the throttle a bit, it loses momentum. In fact, you end up mostly using the 4th gear. However, the Honda fares better than the Classic with respect to higher cruising speed as you can hold around 100kmph with ease. Even the new Classic 350 can manage triple digit speeds, but its sweet spot is around 90kmph at which the motor is absolutely relaxed and you really enjoy the cruise.

In terms of refinement, the new Classic 350 has made a massive leap in comparison to the older UCE motor. Honda is slightly more refined but for RE to almost match it is commendable. On both the bikes you will have to downshift while overtaking, but the Honda is a tad more sprighty. One aspect where the new Classic 350 trumps the CB350 is high speed stability. The RE feels rocksolid at speeds above 100kmph, while the Honda’s front feels a bit floaty.

Fuel efficiency isn’t the most important aspect for buyers of this segment of motorcycles. However, that has changed a lot with the rising fuel costs that will add a dent to your wallet while touring or commuting. Talking about numbers, the Honda easily beats the Royal Enfield with respect to frugality. Additionally, the CB350 offers better real world range of around 550-600km as it gets a larger 15-litre fuel tank.

This is one aspect that is very close to the heart of buyers of this segment. The Classic 350 might not have the iconic thump of the cast iron engine, the UCE’s exhaust note did manage to connect with a lot of bikers. The new Classic 350 doesn't have the OG thump, but it's more mellow, deep and bassy which is pleasing. You also hear a nice intake growl while opening the throttle.

The CB350 is definitely louder and Honda has specifically tuned the exhaust note keeping the old Classic 350 in mind. Initially the throaty exhaust note sounds enjoyable, but it did get a bit irritating after spending long hours on the saddle. So if you want a mellow and bassy exhaust note, the new Classic is the one you will enjoy. However, if you want onlookers to notice your arrival, the Honda wouldn’t disappoint.

Apart from the new motor, the other big change on the 2021 Classic 350 is the inclusion of a new frame. Handling was never the forte of the old Classic as the bike never felt connected with the rider, but that isn’t the case with the new bike. Despite weighing similar to its predecessor, the updated Classic handles completely differently and that’s down to the balance of the chassis. The new classic tips into corners easily and the rider gets lots of feedback and confidence to push more. It isn’t super sharp, but it’s predictable. My only grouse are the Ceat tyres that feel nervous on lane markings in the wet.

The Honda is capable too, and well rounded. But it lacks the polish and the ease of the Classic - the wider tyres also require more steering input. Also, the rear suspension does get a bit wallowy when you push hard or ride over undulations. Talking about agility, the CB350 feels compact and its low kerb weight makes it fun to hustle through traffic. Again, the knobby tyres need a bit more steering effort. The balance of the chassis also makes the Classic a joy to ride in the city, but one has to keep in mind its heft a bit.

The new Classic 350 gets fatter forks, revised suspension travel and their impact is felt immediately. It feels composed over bumps, undulations and broken roads at low speeds. RE also has increased the ground clearance which should make the journey to Leh a bit less taxing. However, at high speeds, the upright seating position does send some jolts up your spine. The Honda is marginally better at high speeds, but the firm ride quality means that you have to be cautious on broken roads.

Royal Enfield have also updated the Classic with larger rotors and this has improved its braking performance. The brake on the CB feels light and gives a crisp bite, but feel through the levers is a bit lacking. Overall the Honda has better brakes and shorter stopping distance. While the new Classic is available with rear drum brake variant and single channel ABS, we will request buyers to opt for the dual channel ABS variant for added safety.

At a glance it’s difficult to distinguish the new Classic 350 from its predecessors. RE designers ensured that they didn’t deviate much from the iconic lines of the older bike. However at close inspection you can see that the mudguard and fuel tank are wider. The only major new design element is the taillight. Unlike the CB350, there are no LED elements on the 2021 Classic 350 to maintain its retro styling. Both the bikes have their own visual appeal with the Honda looking a bit neo-retro and the Classic being proper old school. Parked side by side, the Classic 350 looks slightly bigger.

Both bikes feature a semi-digital instrument console with the CB350’s unit displaying more information. Tripper navigation is an option on the Classic 350, while turn-by-turn navigation is standard on the Honda CB350. Switchgear quality of the Honda is better but both bikes have a bit of annoying ergonomics.

On the RE, the rotary pass light switch is difficult to reach while the reverse placed horn and turn indicator on the Honda is irritating. In terms of quality both the bikes will impress you and there’s hardly any difference between the two. Quality is something we expect from Honda, but for RE to match the levels of the Japanese giant is really praiseworthy.

Even with regards to pricing both the bikes are almost on par. Yes, prices for the Classic 350 base variant are low, but they are for the rear drum brake variant. As for performance and numbers, the Honda is clearly the better bike.

The Honda CB350 is a great option for someone looking for a retro-styled motorcycle with sprighty performance and the legendary reliability of Honda is an additional bonus. So if you’re looking for the above, the CB350 makes better sense. One thing that goes against the Japanese bike is Honda’s strategy of selling it from the Big Wing dealerships only which restricts access to many buyers in Tier 2 and Tier 3 cities.

Even if you keep the sales part aside, the main question is do you really want just performance from bikes of this genre. There are better options such as the Bajaj Dominar 400 and the Suzuki Gixxer 250 if you want a modern tourer. A buyer in this segment is looking forward to an emotional connection with the bike. The Honda CB350 is an impressive bike, but it lacks a bit of soul and character, something that can't be quantified - and something which the Classic 350 has in abundance.

With the new Classic 350 Royal Enfield has managed to iron out the major niggles of its predecessor - crudeness and reliability (as we have seen with the Meteor 350). What really makes the 2021 Classic so much likable is the fact that it has the DNA of the old Classic 350 but in a more modern and usable manner. So if you are planning to buy a retro roadster, the 2021 RE Classic 350 will be our pick.