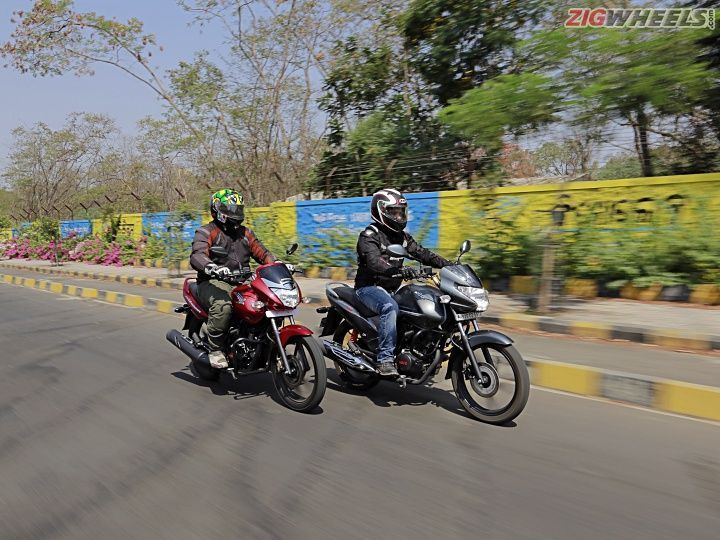 Not everyone likes flash. No, not the DC Comics character, but flamboyance. And when you have your tastes set like that, it invariably engulfs everything around you. From your daily attire to your apartment and your ride, understated and subtle looks permeate everything around you. Which is how we have these two extremely understated machines with us here today, the Hero Achiever 150 and the Honda CB Unicorn.

As incomes and general aspirations, along with the quality of our road infrastructure, grow in India, the 150cc displacement class is no longer the realm of sporty machines for the young-at-heart enthusiast on a budget. Now, the 150cc class also includes sober, innocuous workhorses that are meant to offer the practicality of the 100s and the 125s. You know, workhorses with enhanced abilities to tackle the changing landscape, machines that do duty at the upper end of the sensible and balanced packages that commuters look for.

The Achiever and the Unicorn are two of the best examples of the latter, both related to each other by a not so tenuous thread. The Unicorn, the older of the two bikes here, was already discontinued in favour of the sportier-looking and more feature-rich Unicorn 160, but Honda brought it back thanks to, reportedly, popular demand, especially in Tier II and Tier III cities. Hero claims that the new Achiever 150 is an all-new motorcycle that was born at Hero MotoCorp’s spanking new Centre of Innovation and Technology (CIT) in Jaipur, but a mere glance at the engine is ample proof that it is derived from the same old unit as the Unicorn.

But, which one of these tackles the changing landscape and serves the needs of the upmarket commuter better? And what are the differences between the two that will set the buyer in the course of one offering over the other?  Let’s find out.

Seeing as how they’re targeted at a more mature user base, both the Achiever 150 and the CB Unicorn sit at the staid end of the 150cc design scale. However, while the Achiever is technically the newer machine here, it is also the more unadventurous-looking offering. There’s nothing offensive or out of place, but there aren’t that many places for it to earn brownie points in the design department either.

The Unicorn has been around for a long time now, and has received only one round of cosmetic updates in all this while, but it is still a neat machine even today. Its lines are smooth and flowing, and the whole thing melds together as one cohesive unit. The subtle chrome flourishes above and the blacked-out powertrain and cycle parts add an air of freshness to the tasteful albeit slightly dated design.

While the design of both bikes are quite different, they actually have a lot in common with each other, from the analogue instrumentation and BS IV-compliance to Always Headlamp On and humongous exhaust cans. The asymmetric console of the Achiever also houses a side stand-down indicator, but engine-kill switch is missing on both bikes, which frankly is a travesty on a 150cc motorcycle in 2017.

The primary difference is the presence of i3s on the Achiever and a monoshock rear suspension on the Unicorn. The Achiever 150 gets a heel-and-toe shifter while the Unicorn employs a toe-only shifter which is set too close to the footpeg for comfort. And while both bikes have comfortable upright ergonomics and ample knee recesses, you do get the sensation of being cosseted more comfortably IN the Unicorn than ON the Achiever.

The Unicorn’s 149.2cc engine is a tried and tested unit that has seen duty on numerous other vehicles not just in Honda’s stable but in Hero MotoCorp’s too, including the original Achiever. In its present guise, the Achiever’s mill pushes out 13.6PS@8000rpm and 12.8Nm@5000rpm. That’s just a smidge above the Unicorn, which is good for 12.91PS@8000rpm and 12.8Nm@5500 rpm.

This slight variation in power figures, coupled with the lower rolling resistance from the skinny tyres and the six-kilo weight advantage of the Achiever, is evident in the performance figures. From standstill, the Achiever 150 will sprint to 60kmph and 100kmph in 5.95 and 17.45 seconds, while the Unicorn 150 will accomplish the same in 6.05 and 18.97 seconds respectively. The Hero will do the quarter-mile dash in 20.08 seconds, exiting the run at 102.74kmph and on to a top speed of 105.76kmph, while the Honda will take 20.20 seconds, and on to an almost exactly similar V-Box-tested top speed of 101.95kmph. Yes, outright acceleration isn’t an important consideration for those on the saddle of these motorcycles, but this is a valuable indicator of the motorcycles’ natures.

And the Achiever’s peppier nature bears out in the roll-on accelerations too. It will cruise from 30-70kmph in 3rd gear in 7.10 seconds and 40-80kmph in 4th gear in 8.52 seconds, while the Unicorn will sprint through the same goalposts in 7.31 and 9.71 seconds respectively. In every straight-line performance parameter, like overtaking another bike or gunning it off traffic lights, the Hero pips the Honda by a small but distinctive margin.

Noise and vibration levels on both bikes are absolutely top of their class, but the Unicorn does emit a slight buzz from the handlebars and footpegs above 4000 rpm, which gets more pronounced than the Achiever as the revs climb north of 6000 rpm. Not that you’d be pushing them that hard regularly, thanks to the ample low- and mid-range torque on offer on both.

Let loose and free on open roads, the Achiever 150 will return 61.07 kilometres to the litre with i3s on. Bring it into the confines of the city and that figure drops down to 51.8kmpl, giving it an overall fuel efficiency figure of 54.11 kmpl as per our testing methodology. In the same conditions, the CB Unicorn 150 will return 57.18 kmpl and 48.7 kmpl, giving it an overall figure of 50.82kmpl. Coupled with the 13-litre fuel tanks on both, that translates into a range of 700 km for the Achiever, whereas the Unicorn will eke out 660 km on a tankful.

The Achiever 150 has what has got to be the skinniest pair of tyres ever fitted on a 150cc bike in the country: 80/100-section Seat Securas mounted on 18-inch alloys at both ends. Clearly selected keeping an eye on efficiency, these tyres are not exactly built to straighten hill roads or even teach a lesson to that convoluted route you take to avoid traffic on your way to work daily. What they do, and do well, is offer little rolling resistance and eke out every last bit of mileage.

This, coupled with the conventional suspension at both ends, endow the Hero with a planted yet slightly firm ride quality, especially with my light frame aboard. Make no mistake – it coped with Pune’s hillock-sized speed humps without missing a beat, but can get skittish over a badly surfaced stretch. Loaded up with a pillion – or, as is invariably going to happen with most customer’s bikes in rural areas, a bike-load of knick-knacks – the ride is considerably less bouncy and more comfortable. The upright riding posture and the long and wide seat are otherwise great for everything from 15-minute grocery runs to the occasional highway jaunts.

The Unicorn, on the other hand, has one of the most sorted chassis and suspension in the country, with or without a pillion. The front forks are on the softer side and tend to dive under hard braking, but it, in conjunction with the superbly tuned direct-link monoshock at the rear, imparts a ride and handling quality that is just the right blend of sportiness and comfort. Its MRF Nylogrip Zapper tyres – 2.75 at the front and 100/90 at the rear, on 18-inch wheels – are nothing worth writing about, but are still miles better than the spindly pair the Achiever is hobbled with.

Both the bikes are anchored by single front discs and drum brakes at the rear, but the Achiever also has an optional front drum model, which we wouldn’t recommend at all. The slight premium for the front disc is worth every penny. Bite from the discs are progressive and good enough for the performance on offer but the Unicorn’s front, like we mentioned earlier, has a tendency to dive quite a bit under hard braking. From 80kmph, it will come to a dead halt in 38.41 metres. Dial down the speed to 60kmph and the figure drops to 20.87 metres. The Achiever achieves the same in 37.70 and 20.11 metres, respectively.

However, numbers don’t always convey the full picture when it comes to performance. While the Achiever gets away with the marginally better distance, its skinny rear has a tendency to skid and get out of line under pressure, a downside that the Unicorn never has a problem with.

Thanks in no small part to its unapologetically utilitarian stance, the Achiever 150 wears its commuter-ish vibe as a sort of medal.  The Unicorn, by contrast, feels like the bigger machine here, a more grown-up thing, if you will–the one you pick when you want to have a bit of fun laced with your practicality.

In an age where the ‘more is better’ adage is awash everywhere, it is kind of refreshing to still encounter these two honest to earth machines that have no pretensions about what they are. Sure, there are flashier and sportier alternatives to both bikes from both manufacturers themselves – like the Hunk and Xtreme duo, and the CB Unicorn 160 and CB Hornet 160R – but the Achiever 150 and CB Unicorn still offer most of the stuff that their bigger siblings do, and at a substantially lower price point.

And, as with most things in life, price is also the sobering final clincher here. For the Unicorn, with its price tag of Rs 75,760, will dig a nine grand-deeper hole in your pocket than the Achiever 150, which comes in at Rs 66,702 (both ex-showroom Mumbai, disc brake variants).

That is a big stepping stone for anyone looking to upgrade to their first 150cc motorcycle in the country, and a factor that will invariably tip the scales in favour of the Achiever. In both city traffic and out on the open highway, it is the obvious and rational choice simply because it is so efficient at what it was engineered to do – ferry people without fuss, day in and day out. Despite the Unicorn offering the more grown-up feel, the Achiever also offers better efficiency – another big tipping factor – and marginally better performance as well, making it the winner of this comparo.