Volkswagen Ameo Cup Round 3: As It Happened 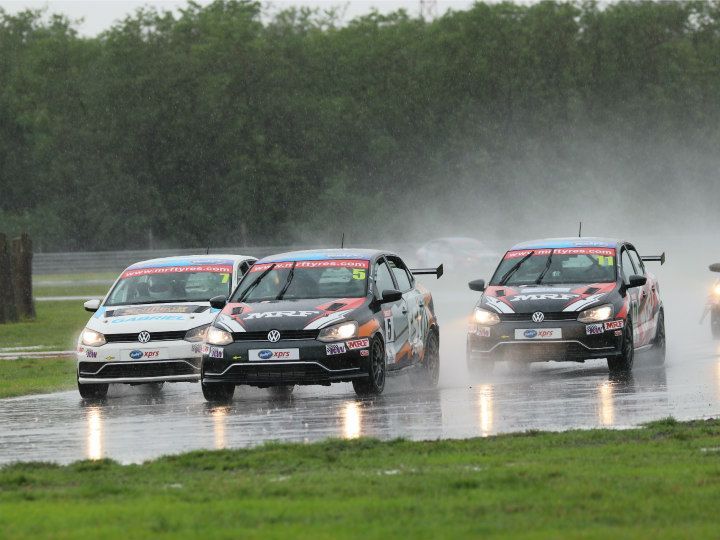 Having landed in Chennai on Saturday morning, the omens were not good. It was pouring rain and my cab driver had told me that it had been raining for the past 12 hours. This meant that MMRT would be soaking wet and all the muddy run-off would have turned into slush. Fast forward to the track and there were no surprises. The races were postponed since most of the time reserved for free practice and qualifying had been eaten away by the rain. While racing could have happened in these conditions, most of the participants did not have wet tyres in hand, which cost more time. It was a long wait before the tyres were made available as they were not at the venue.

The conditions cleared up after lunch and free practice and qualifying were clubbed into one session. The F1600s went out first with the Ameo Cup cars following them. The last to head out on the day was the ITC class, with Volkswagen running three race-spec Vento’s. Of the four races scheduled for the day, only two were held with the weather playing spoilsport.

The first was the F1600 category in which youngster Sohil Shah lead the race from the lights till the chequered flag. The race, which was shortened from eight laps to six and finished with the safety car on the track due to an incident in the fifth lap.

Things looked very bleak on day two with the torrential downpour making an appearance in the wee hours of the morning. The ITC cars, not having seen any racing action the previous day, were supposed to kick off things on Day 2. They were, however, replaced by the F1600 category as some of the contenders in the category were running on slicks, which was dangerous considering the conditions. The stewards asked the ITC racers to return to the pits and replace their slicks with wet tyres.

In the meantime, the F1600s kicked off things but the race was over as soon as it began. A 10 car pile-up on C1 saw the race being red-flagged and the damage was such that all F1600 races for the day were cancelled.

The ITC cars, having been fitted with wet tyres now, lined up next. Arjun Balu had qualified for pole the previous day, followed by Aditya Patel and Dhruv Mohite. As the lights went out, Arjun and Aditya were at it with some great wheel-to-wheel racing on display. Arjun was quicker in qualifying by approximately two seconds and as the race progressed, his advantage was on full display for the spectators. However, Aditya was relentless in his pursuit and at one point, he even managed to take the lead from Arjun near the back straight.

However, Arjun soon reclaimed it as Aditya overcooked the last corner of the lap and ran wide off the track. Despite the snafu, Aditya managed to finish second while Dhruv finished third.

Next up was the Ameo Cup. The reverse grid came into effect for the second race of the round and Jeet Jhabakh from Hyderabad took advantage of that to finish first. Aiman Saddat from Bangladesh finished second with Siddharth Mehdiratta from Lucknow finishing third. Pratik Sonawane, who finished first in qualifying, was unlucky to head straight into the tyre wall at the end of the back straight and had to retire from the race.

Race 2 of the ITC category also saw the reverse grid come into effect. With Arjun Balu starting in eighth, the three Volkswagen’s piloted by Aditya Patel, Dhruv Mohite and Ishaan Dodhiwala stormed into first, second and third position by the end of C1. Ishaan, however, crashed out near the back straight on lap 1 and Dhruv, Aditya and Arjun finished the race in that order. The conditions had started to dry up by now, leading to longer gaps between first, second and third.

Race 3 of the Ameo Cup started with the regular grid. Despite having crashed out of the second race, Pratik Sonawane ran an excellent race to take the top spot on the podium. Sidharth Mehdiratta took the second spot while Shubhomoy Ball finished third once again. By the time this race was held, the track had become almost dry. Water was present on the chicanes between C3 and C4, although it was off the racing line.

The last race of the ITC category started with the normal grid and Arjun Balu led the race from start to finish. Aditya Patel and Ishaan Dodhiwala finished second and third, respectively. The last race was devoid of much wheel-to-wheel action as the track had almost dried out by that time the race was held. Arjun Balu drove past the chequered flag without much pressure.