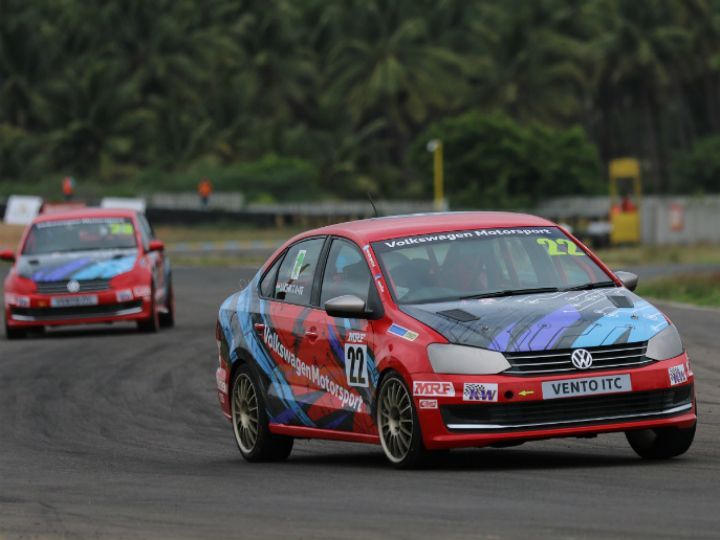 Last weekend, Volkswagen Motorsport made its official entry as a factory team in MRF MMSC FMSCI Indian National Car Racing Championship’s ITC category. Volkswagen’s weapon of choice was not one but three 1.8-litre turbocharged Vento race cars. Long story short, the weekend ended with Vokswagen dominating the ITC class with an impressive 7 out of 9 podium finishes in three races.

The three Vento’s clad in racing livery was piloted by former one-make series winners Karthik Tharani from Chennai, Dhruv Mohite from Kolhapur and Ishaan Dodhiwala from Hyderabad. The qualifying laps itself conveyed the team’s competence as  Dhruv Mohite took the pole position with the fastest lap time of 1:07.829 minutes. Karthik and Ishaan took third and fourth positions on the grid. Once the lights turned green, the three Ventos showed stellar pace with epic poise and dynamics.

Dhruv led the pack from start to finish and registered the first victory for Volkswagen Motorsport India in the ITC category. Karthik, who had a good start, claimed the second step on the podium. Even though the factory team had to contend with seven other competitors, the pace was so strong that the only competition they had was from Bangalore-based Race Concepts and their City VTEC race car number 39 driven by racing veteran Arjun Balu. Ishaan, on the other hand, had a bad day, as he had to retire after running over fluids leaked onto the track by another car.

Race 2 of the ITC class was held the next day. The top six grid positions were reversed based on the results from Race 1, pushing Dhruv to sixth and Karthik into fifth on the grid. Ishaan, meanwhile, started from seventh position. The second race was an outright testimony to  Volkswagen Motorsport’s dominance. Even though Karthik started from the back of the pack, he snatched the lead within the first corner and was closely followed by Dhruv in second place. Ishaan, who started way down in seventh position, showed good performance and climbed up the ladder. He put up a good fight with Esteem (77) driven by  D Vidya Prakash, another veteran racing driver. Ishaan was right on the Esteem’s tail for much of the race. However, towards the last section of the last lap, in a series of corners called Mickey Mouse, he decided to make a move as he noticed that his opponent was losing time there. Ishaan eventually grabbed the third spot on the podium, helping Volkswagen Motorsport sweep the first three positions!

The last race saw Karthik start in pole position with Dhruv in second. The third pole position was taken by car number 39 driven by Arjun Balu followed by Ishaan in fourth place. Karthik and Dhruv took the first and second position right from the first corner itself and finished in the same order. Ishaan, meanwhile, had to retire from the race as he went off the track after a few laps at the first long corner after the pits.

Commenting on the team’s dominance, Sirish Vissa, the head of Volkswagen Motorsport India, said, “I am thrilled with what we have achieved over the weekend. We have been developing our race cars from last year and it has been a rollercoaster ride for us since then. We had decent pace last year as well, but it was not good enough to win races. We then made adjustments to the car’s dynamics to make it go quicker mid-corner which helped us gain an advantage over the competition.” He added, “In Karthik, Dhruv and Ishaan, we have three young and dedicated drivers who are working hard towards developing our race cars further and bringing home results that we could only dream of before coming to Coimbatore.”

By making its official entry in the ITC class, Volkswagen Motorsport India plans on highlighting its customer sport programme through which they aim to build and provide race cars even for privateers. The next race of the season will unfold at the Madras Motor Race track in Chennai over the coming months.

Also Read:
How The Iconic Toyota Supra Evolved Over The Years
Valhalla: Aston Martin RB-003 Gets A Name