These Five Concept Bikes From 2018 EICMA Stole Our Hearts And How!

From a 125cc ADV to a middleweight supersport, here are the top five concepts from last year’s EICMA! 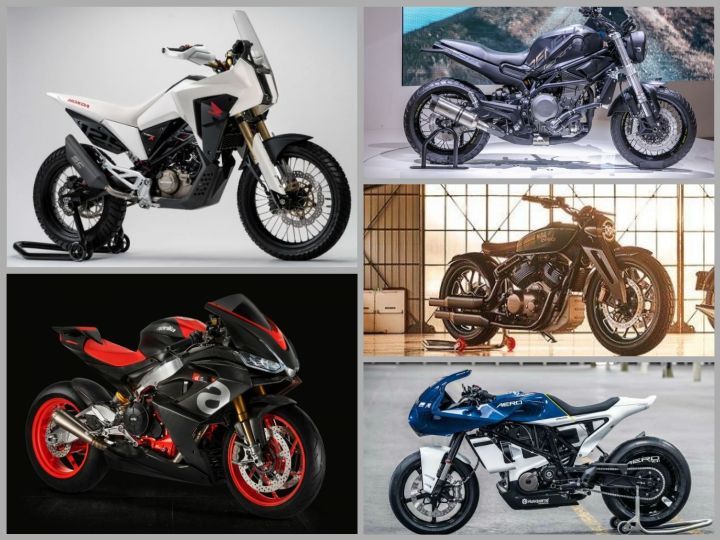 Concept bikes are intriguing to both discerning enthusiasts and the layman alike as they are the embodiment of manufacturers’ and designers’ imagination running hog-wild. The 2018 EICMA show witnessed quite a few interesting concept motorcycles. Here are our top 5 picks:

Royal Enfield surprised all of us by unveiling a brand new concept motorcycle, the Concept KX at the 2018 EICMA show. The most interesting aspect of the bike was its new 838cc V-twin air-cooled engine with oil cooler. While the output figures haven’t been revealed, it does give us a fair bit of an idea about future bigger-engined Royal Enfields, which would take on the Harley-Davidson motorcycles.

While the Concept KX bears resemblance to the Indian Scout Bobber, its design is actually inspired by the 1938 Royal Enfield KX, which incidentally also came with a V-twin albeit in a 1140cc guise. The Concept KX features properly premium underpinnings in the form of an inverted front fork, rear monoshock, dual front discs with radial calipers and a disc at the rear.

If you thought the Husqvarna Vitpilen 701 looked beautiful, take a look at the Vitpilen 701 Aero Concept! The bodywork has just the right balance of curves and creases to make it look like it can slice through the air like a katana through the abdomen. Not surprisingly, the Swedish brand has teamed up with KISKA to come up with this creation. For the uninitiated, KISKA is the design firm that’s responsible for KTM’s mad motorcycles.

While the bike is built around the Vitpilen 701, Husqvarna says the Aero Concept gets an elevated power output without specifying the exact figure. For reference, the 692.7cc single-cylinder liquid-cooled engine produces 74.7PS and 72Nm. To complete the sporty demeanour, the 701 Aero concept also gets lowered clip-ons for an aggressive riding stance.

The middleweight segment is pretty lucrative as the bikes under this segment are neither intimidatingly powerful nor too expensive. Aiming to capitalise this segment, Aprilia started off by unveiling the RS660 Concept at the 2018 EICMA show. Its production-intent was clear right from the beginning as the concept didn’t exactly look outlandish. The bike featured a 660cc parallel-twin motor derived by chopping half of the 1100cc V4 engine, which powers the Tuono V4 1100 and RSV4 1100 superbikes.

What’s more, Aprilia recently teased the production-spec RS660, which will be unveiled at this year’s EICMA. The best part is that it is likely to come with active aerodynamics and if it does, the RS660 will be the world’s first production motorcycle to have this feature.

Honda proved big things come in small packages with the unveiling of the CB125X ADV, along with a naked concept, the CB125M. What really intrigued us more than the naked concept was the ADV, which features proper Dakar-inspired design language, high ground clearance, sophisticated underpinnings (inverted fork and monoshock) and spoke wheels wrapped with block-pattern tyres.

The design studies have been done by Honda’s R&D centre in Rome, and are built to allure younger riders. Moreover, Honda says the European 125cc market witnessed a 28 per cent growth, so if we’re lucky, we could see the production version at this year’s EICMA.

The Leoncino range is Benelli’s retro-modern take on its motorcycles. The Italian brand showcased the Leoncino 800 Concept at the 2018 EICMA. Interestingly, this motorcycle carries the scrambler genes and is likely to blossom into a full-blown production bike, which could be unveiled at this year’s EICMA show. When unveiled, the bike will go head-to-head against the Ducati Scrambler 800 range.

Coming back to the concept, it featured a slightly different trellis frame compared to the 752S, hinting at the possibility of an all-new unit designed specifically for this motorcycle. Benelli had not revealed the specifics of the bike’s engine but it would have likely been a tuned version of the 752S’ 754cc twin-cylinder DOHC liquid-cooled motor. To give you a perspective, the engine in the 752S makes 76.8PS at 8500rpm and 67Nm at 6500rpm. The Leoncino 800 Concept featured spoke wheels with block pattern tyres, inverted fork and a monoshock at the rear.