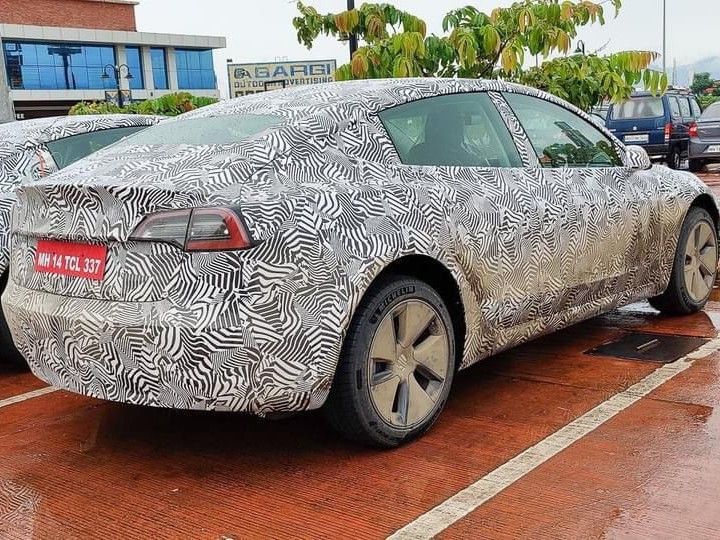 We know that Tesla is preparing to commence its India innings with the Model 3 entry-level electric sedan being spied on Indian roads. The electric sedan has been spotted again in the country, albeit still sporting heavy camouflage. This time, we’ve gotten a glimpse inside the India-spec model which suggests it will be very similar to the model sold overseas.

The highlight inside is the minimalistic dashboard layout with a  massive touchscreen infotainment system at the centre of it. Features could include OTA updates, a tinted glass roof, 14-speaker audio system, and 12-way power-adjustable heated front seats. But the real party trick inside is the Autopilot self-driving functionality which is unlikely to make it to the India-spec model.

The latest spy images of the exteriors aren’t too different from before as the model is still draped in heavy camo. But the alloy wheels, headlamps, and DRLs match the units sold abroad.

In the USA, Tesla offers three powertrain options for the Model 3. It starts with the Standard Plus, offering 432km of range via a rear-wheel drivetrain, followed by the Long Range giving 568km of range via a dual-motor setup and an all-wheel drivetrain. The Performance trim garners 507km of range and is the most potent Model 3 with a 261kmph top speed, and a 3.1 second-0-97kmph sprint time. The India-spec Model 3 might only get the Standard Plus and Long Range options as a start, with the Performance trim likely to show up at a later stage.

Tesla is expected to launch the Model 3 in India around early 2022 as a completely built-up (CBU) unit and is likely to be priced around Rs 60 lakh (ex-showroom) if there’s no reduction in customs duties by the Indian government. That being said. The government is considering lowering these customs duties.