Here’s A Peek Inside The Tata Buzzard Automatic’s Cabin 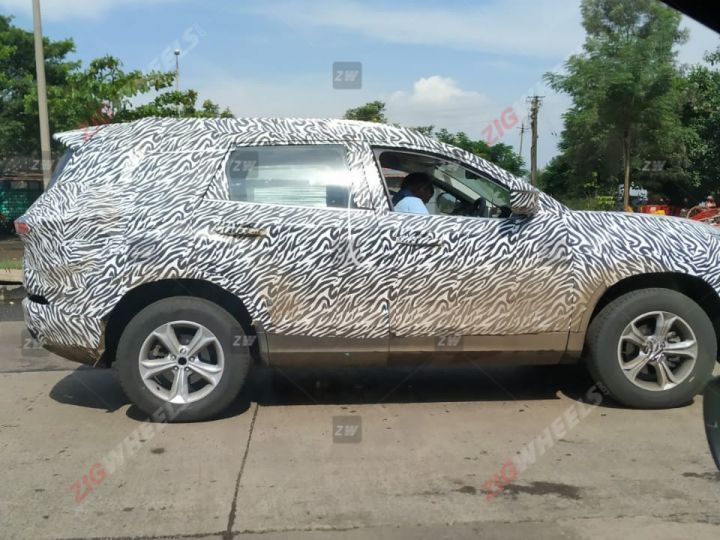 We’ve already witnessed Tata Motors’ upcoming Buzzard (Harrier 7-seater) on the outside, being spied numerous times on public roads. But this fresh set of spy shots finally gives us a glimpse of what's inside the SUV’s cabin. While it retains the dashboard layout of the current Harrier, the main talking point here is the presence of an automatic gear lever. This means that Tata is ready to equip the Harrier lineup with the Hyundai-sourced 6-speed automatic transmission. The Buzzard is one of the many cars Tata Motors plans to launch in India in the coming year, including EVs and hatchbacks.

The Buzzard will borrow a number of features from the standard Harrier, including its 8.8-inch touchscreen infotainment system with Android Auto and Apple CarPlay, climate control and coloured multi-info display. Other expected features include cruise control, keyless entry with push button start, automatic headlamps as well as rain-sensing wipers. It is also likely to feature terrain modes as well as drive modes. Safety kit like six airbags, ABS with EBD, rear parking sensors with camera, electronic stability program, high-speed alert as well as driver and co-driver seatbelt warning are also expected.

We already know that on the outside, the Harrier 7-seater will feature changes in the side profile and rear section. The changes include a longer rear overhang, a taller roofline and a bulge above the rear quarter glass for ample headroom in the third row. Other enhancements include a roof spoiler, updated tail lamps and a more upright tailgate. While the front end hasn’t been spotted, it is expected to be identical to the standard Harrier.

Expect the 7-seater Harrier to retain the 2.0-litre Fiat-sourced Kryotec diesel engine, but with an BS6 upgrade. This version of the powertrain is expected to put down more power at 170PS, compared to 140PS in the current Harrier. Apart from the Hyundai sourced 6-speed automatic, a standard 6-speed manual gearbox is also expected to be on offer. The more powerful engine and the 6-speed autobox are also expected to make their way to the standard Harrier soon.

The Tata Harrier 7-Seater is likely to make its debut at the upcoming Auto Expo 2020, with a different name from the model called the ‘Buzzard’ at the Geneva Motor Show earlier this year. Expect the SUV to take on the likes of the Mahindra XUV500 and the upcoming 7-seater MG Hector post its launch in India.