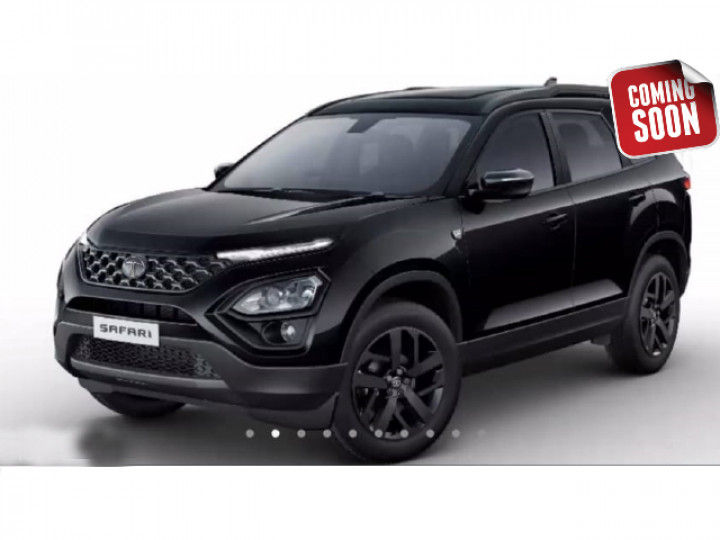 Looks like the Tata Safari is the next model to get the Dark Edition treatment as the carmaker has given a teaser on social media with an indication that it could be launched on January 17. As the name suggests, the special edition variant of the 7-seater SUV will have a blacked-out theme inside and out. Our dealer sources suggest it’ll likely be available in the XT+ and XTA+ trims and the top-spec XZ+ and XZA+ variants.

On the outside, the Tata Safari Dark Edition is likely to come in a new black paint shade with blacked-out exterior trim bits and dark-grey 18-inch Blackstone alloy wheels. Inside, it could trade the Safari’s dual-tone beige-black and white-black interior themes for a black-grey Gunmetal scheme.

Features will likely remain unchanged, with higher-spec variants (XZ+/XZA+) expected to be fully loaded with features such as a panoramic sunroof, powered driver’s seat, 6 airbags, 8.8-inch touchscreen, and a 9-speaker JBL audio system. They could even get ventilated front seats and optional ventilated captain seats (in the 6-seater variants) that are exclusive to the Safari Gold Edition.

Powering  the Safari is a 2-litre turbo diesel engine that makes 170PS and 350Nm. It can be  paired with either a 6-speed manual transmission or a 6-speed automatic. Expect the Dark Edition trims to have the same engine and transmission combinations.

We expect the Tata Safari Dark Edition variants to be priced at a premium of around Rs 30,000 over the standard model’s XT+/XTA+ and XZ+/XZA+  that currently retail from Rs 18.86 lakh to Rs 19.81 lakh (ex-showroom). It'll rival the Mahindra XUV700, Hyundai Alcazar and MG Hector Plus.