What Is This Skoda EV Dressed As A VW Tiguan Doing At The Nurburgring? 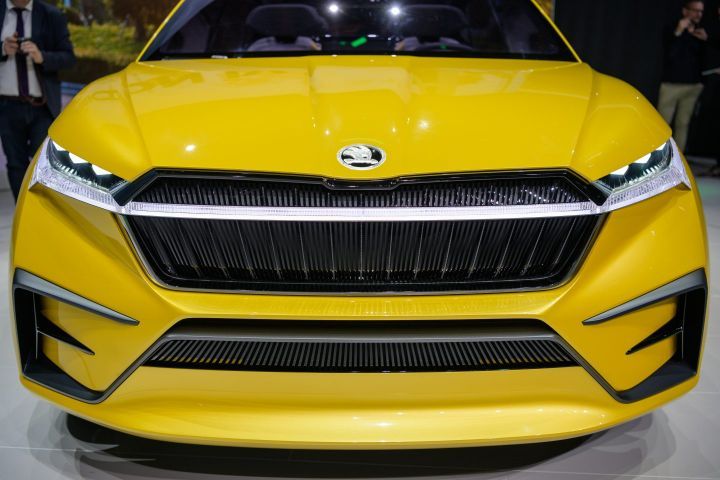 Skoda Auto’s Vision iV concept was showcased at the Frankfurt Motor Show this year. Now, a Volkswagen Tiguan has been spotted at the Nurburgring being used as a prototype for the concept. The SUV will be Skoda’s first car to be based on the Volkswagen Group’s modular MEB electric vehicle (EV) platform. It is expected to launch globally some time in 2020. Skoda Auto recently teased five models that it plans to launch in India by 2021, and this MEB EV does not appear in that list. So expect the MEB EV to show up here after two SUVs, the new Rapid and Octavia, and the updated Superb.

The test mule spotted at the Nurburgring is a Volkswagen Tiguan, but it has been stretched to fit the underpinnings of the Skoda Vision iV since the latter is about 18cm longer than the Tiguan. The added length in the wheelbase contributes to the visible gap in the B-pillar between the doors, while the rest of the length shows up in the rear overhang and protruding bumper.

MEB stands for Modularer E-Antriebs-Baukasten, or modular electric drive matrix. It incorporates the different components of electric powertrains and structures them differently from combustion cars. Cab-forward designs and wheels at the extreme corners are the visible effects of an EV-centric design, though the complexity of the construction remains hidden beneath the bodywork.

Skoda’s Vision iV concept is projected to house an 83kWh battery which should give the SUV a range of 500km. It will have a motor at each axle with a total power output of 306PS. Skoda claims a 0-100kmph time of 5.9 seconds. But since it will be the only all-electric SUV in Skoda’s lineup, the production SUV is not expected to retain the concept’s coupe-like roof line. Subsequent launches may include a coupe-SUV.

The company is expected to launch the SUV globally late in 2020. Skoda hasn’t disclosed any plans of bringing it to India. An influx of electric cars in 2020 is likely to change India’s outlook on EVs, which will eventually determine which international models make their way to our shores. Volkswagen aims to price EVs competitively with combustion models. Prices in India for the Tiguan start from Rs 27.98 lakh to Rs 31.38 lakh. While variants with smaller batteries may cost several lakhs more than the current Tiguan, the 500km-range model is likely to cost twice that amount. It remains to be seen how new import and taxation rules affect prices of cars like the Skoda SUV.