There’s no denying that concept cars are a glimpse into the future. Here’re the coolest of them revealed this year in Frankfurt 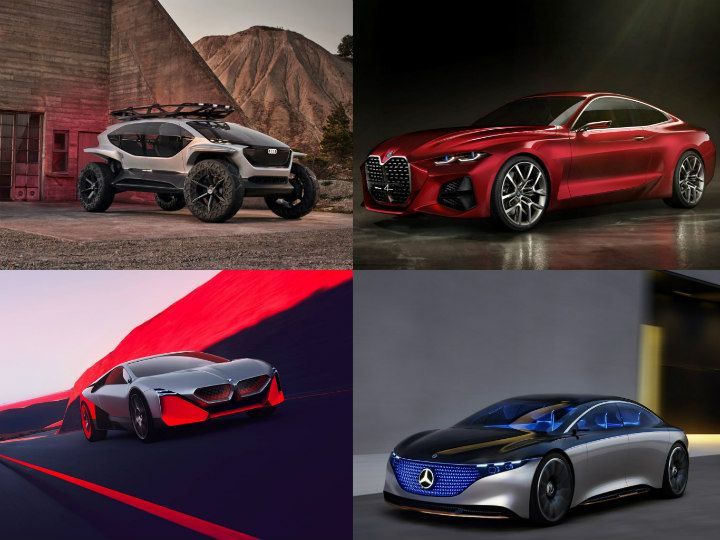 The 2019 Frankfurt Motor Show was more like Disneyland and Christmas coming together under one roof for the automobile world. A variety of new models, showcases and future plans were announced by car makers all over the world. Aside from that, we also got to see auto manufacturers showcase prototypes to give the world a glimpse into what their future vehicles could be like. While each of them were different in their own way, which of them was the most eye catching? Here’s a look at the top concepts that were on display at the Frankfurt Motor Show.

The name Cupra is definitely not the most well-known among common folk, but it is a sub-performance brand of SEAT, which is a part of the Volkswagen Group. At the Frankfurt Motor Show, Cupra certainly made heads turn with the all-electric Tavascan Concept SUV.  The highlights of the SUV include a sleek design with a sharply raked rear window that leads into full-width tail lights. It also gets massive turbine shaped 22-inch wheels under the fenders. Other exterior bits include a smattering of functional air vents to keep the battery cool and help the Tavascan slip through the air.

It is built on VW's modular MEB platform, and produces 302PS of power with a 77kWh battery, which give the EV a range of upto 450km.

Hyundai’s latest all-electric concept, the 45 EV, sports a design trend that not only showcases its future tech, but also is a throwback to the Pony Coupe Concept from 45 years ago. Like the concept before it, the EV sports a sharp front end dominated by dot matrix lighting called ‘Kinetic Cube’ that hides beneath the bonnet. It also gets an illuminated Hyundai logo as well. The side are sharp and angular with active LED lights that indicate the range left in the car. The rear is dominated by dot matrix tail lamps which take the same shape as the headlights up front.  Other bits include cameras that replace OVRMs like the Audi e-tron.

On the inside, the EVs futuristic design continues with lounge chairs that rotate towards each other, plenty of wood and fabric trims and a large screen spanning the width of the dash that consists of an instrument cluster and infotainment system. It also gets nifty tech like a variety of automated driving technology.

BMW showcased what its future M3/M4 or even the next-gen 4 Series could look like with the Concept 4 at the Frankfurt Motor Show. If you thought BMW was starting to go overboard with its kidney grille, prepare to be shocked, as the Bavarian brand has gone a step further with an even bigger version.

Aside from the grille, it is still a looker with striking bits like the laser headlights, intricate lower bumper design and an aggressive looking rear end. The speciality of these laser headlights is that they have no glass cover on them and are integrated into the body like three-dimensional sculptures. The mirrors are sleek and simplistic with dual stalks mounted on the weather strips instead of the door panels. The intricately designed 21-inch wheels cap off the aesthetics of the concept. Unfortunately, technical details are still under wraps.

We now head into the more wacky contraptions that were present at Frankfurt with Audi showcasing the all-electric AI:Trail Quattro concept. At a glance, it looks like it has time travelled its way from some other galaxy in the distant future. Aside from that, the electric off-roader looks like it means business and ready to tackle the harshest of terrains with a wide wheel track and huge ground clearance. It is powered by four electric motors for each wheel, producing 435PS and 1000Nm for a top speed of 130kmph. It gets an electric range from 400 to 500km (WLTP). If you’re going off the beaten path, the concept has a range of 250km.

As it is an off-roader, there are no displays inside the vehicle for drivers to focus on the terrain. It gets a massive windshield that wraps around for wide visibility, along with a transparent glass area for all the doors. And now here’s the party trick! It features five rotorless, electrically operated drones with integrated matrix LED lights that act as high and low beam lights and also fly ahead of the vehicle and illuminate the path beforehand. Even cooler is that they can also send a live video feed to the driver.

Pegged as the successor to the i8, the BMW Vision M NEXT concept represents Bavaria’s future direction in car design with a variety of interesting tidbits. On the outside, it takes some styling cues from the i8, with highlights that include matte ‘Thrilling Orange’ inserts on front and rear gets along with the silk-matte ‘Cast Silver’ metallic paintwork on the rest of the car. Even the wheel rims get a unique color combination with the front rims getting a silver-and-black two-tone finish, while the rear sets get orange inserts to match the body. Aside from that, the front end retains the kidney grille with orange inserts alongside a cutting edge Laser Wire headlight.

The inside is just as extreme as its exteriors, with features like gullwing doors that open via facial recognition, a driver-centric cockpit design as well as a high-performance drag-car-inspired steering wheel with fingerprint sensors as a starter button. Other bits include an AR head-up display, curved glass centre display and a sleek digital dashboard that displays information such as revs, road speed, energy management and the driver’s heart rate in real time.

Under the hood,it is powered by a  2.0-litre four-cylinder petrol hybrid unit with two electric motors that deliver 680PS of power. It propels the model from 0-100km in just 3.0 seconds and tops out at 300kmph. In all-electric power, the M Next Concept manages a range of upto 100km. Its production-spec iteration will be a limited-run model that will be sold in the international market shortly before the introduction of the second-gen i8.

Finally we head to the most eye-catching concept at Frankfurt, the Vision EQS. It is essentially what an S-Class would look like, but electrified. However it is much more than that as it incorporates a design so sleek that you could mistake it as a one-piece body. And that’s not even the best part as it gets illuminating exteriors like a grille with 188 individual LEDs on a black panel along with digital headlights that lends a 3D effect to the front area. The Mercedes three-pointed star is also illuminated.

Other illuminated bits in the EQS include a sleek 360-degree blue strip, as well as a tail light setup with 229 LEDs around the bodywork shaped like miniature three-pointed stars. Other nifty additions include massive spoked wheels and rear windshield that blends in with the black finish. Going inside, the EQS features a blending dashboard and a host of digital screens around it. It also gets level 3 autonomous tech and interior upholstery made from a variety of recycled materials.

Under the hood, it is powered by electric motors at the front and rear to produce 488PS and 760Nm. It is capable of completing the 0-100kmph sprint in under 4.5 seconds. The twin motors propel the EQS to a top speed exceeding 200kmph. It gets an electric range upto 700km and comes with 350kW charging capability that can recharge the batteries to 80 per cent in just 20 minutes.

Thus the 2019 Frankfurt Motor Show not only saw a host of new models and showcases; it was filled with wacky concept models that may transfer some of its tech to future production models. What’s your take on the wackiest concept from the Frankfurt Motor Show? Let us know in the comments below.