Here’s Our First Look Of The New Skoda Rapid 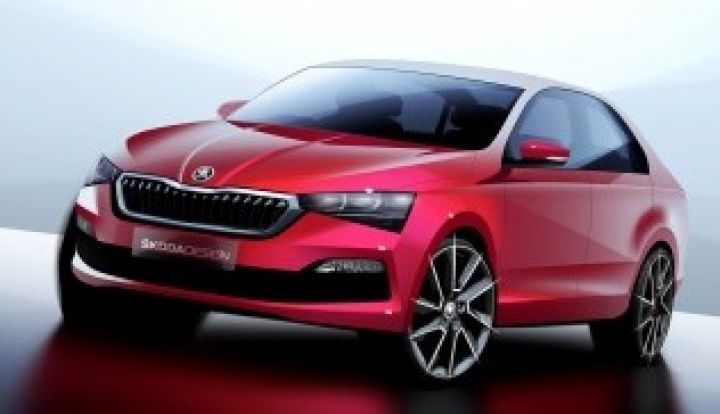 Skoda Auto had recently revealed its plans for the Indian market at the Kodiaq Scout launch. This comprised of the launch of five new models in the country by 2021, including two new SUVs and a compact sedan under its India 2.0 strategy. Now, Skoda Russia has released the first sketch of the upcoming 2020 Rapid sedan and stated that its world premiere will take place at the end of the year. This news should come as a relief to Skoda enthusiasts in India anticipating a refresh for the car. Skoda Auto and Volkswagen Group recently merged into a single entity: Skoda Auto Volkswagen India Private Limited.

The Skoda Rapid received a facelift in 2017, but the revision was only limited to cosmetic upgrades. The same 1.6-litre petrol and 1.5-litre TDI engines are on sale even today. However, the fate of the Rapid is sealed, since neither engine is BS6-compliant. Hence, Skoda will have to discontinue sales of the Rapid come April 2020. The news of a worldwide launch indicates the possibility that the Rapid will not be discontinued, but refreshed on or before the deadline.

The new car has sharp, angular headlights and a wide, hexagonal grille. The bonnet crease present on the existing model is clearly visible in the sketch as well. Skoda states, “The first image of the new ŠKODA RAPID shows balanced proportions, sharp edges and vibrant design elements that emphasize the modern character of the model.”

Skoda’s angular headlight look may not be winning hearts on pre-production test mules, but an aesthetic coherence is undeniable in the released sketch. The lamps resemble the Superb’s headlamps more than the Octavia’s.

Skoda’s launch timeline is still under wraps. Under the India 2.0 strategy, two new SUVs, which are likely to be the Karoq and a sub-4-metre SUV based on the India-specific MQB-A0-IN platform, will also be launched. Apart from the rapid, the other two launches will be model revisions of the Superb and the Octavia. If the Rapid is launched globally before the end of this year, we may get to see it around the 2020 Auto Expo. Prices for special edition Rapids are around Rs 6.99 lakh, but expect the new Rapid to come in a tad more expensive.