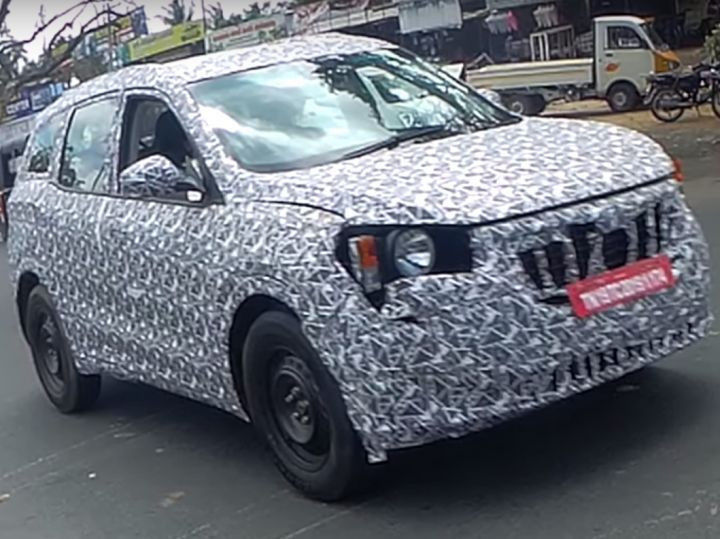 Mahindra’s long-pending second iteration of the XUV500 SUV continues to take shape with a closer-to-production test mule being spotted for the first time recently in Kodaikanal. Latest spy shots provide a better glimpse of what to expect inside the cabin and we can tell you, it’ll be a major overhaul.

While the earlier cabin shots were heavily camouflaged, the latest ones reveal a single frame housing that connects the touchscreen unit with the instrument cluster. This is akin to the setup found on modern Mercedes-Benz models as well as the Kia Seltos.

The size of the new touchscreen is yet to be known but it looks larger than 10-inches, with a similarly sized digital instrument cluster. Other highlights include a three-spoke flat-bottom steering wheel busy with controls and air con vents positioned below the touchscreen. Expect features such as Android Auto and Apple CarPlay, wireless charging, connected technology, a panoramic sunroof, powered driver’s seat, and keyless entry with push-button start. Safety equipment could include multiple airbags, ABS with EBD, front and rear parking sensors, and electronic stability program.

Despite the camouflage hiding a fair amount of details, we could notice plenty of notable bits in the new XUV500. It features a cleaner silhouette, an upright front end with a sleek six-slat grille, LED headlamps possibly with LED DRLs, 10-spoke alloy wheels, flush-fitting door handles, and split tail lamps.

Under the hood, the new XUV500 is likely to be powered by the new 2.2-litre mHawk diesel and the 2.0-litre mStallion turbo-petrol engines that debuted in the second-gen Thar. Expect outright grunt for both engines around the 200PS mark, with manual and automatic transmission options.

Mahindra is slated to launch the next-gen XUV500 SUV around the first half of 2021, with prices likely to be similar to its predecessor that retails from Rs 13.52 lakh to Rs 19.27 lakh (ex-showroom). Expect the new XUV500 to take on the Hyundai Creta, Kia Seltos, MG Hector/Hector Plus, Tata Harrier, and the upcoming Tata Gravitas.