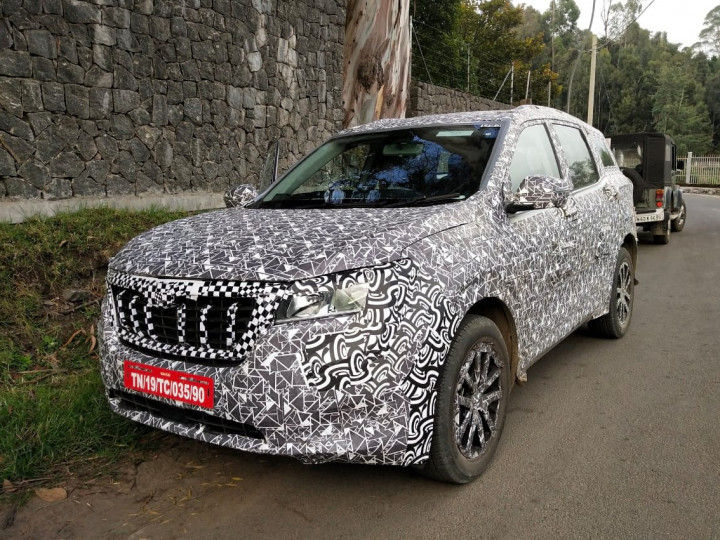 Soon after launching the second-gen Thar, Mahindra and Mahindra has shifted its focus to its upcoming launch: the second-gen XUV500. A closer-to-production test mule has been spotted for the first time in Kodaikanal, revealing the final design details of the upcoming mid-size SUV. Here’s a closer look:

The second-gen XUV500 looks mature and cleaner than before. Sure, the camouflage is hiding the design details but we can notice an upright face with a sleek six-slat grille, similar to the Alturas G4. It’s flanked by a pair of LED headlamps that could get snazzy DRLs.

In profile, the XUV500 is sleek and loses out on the muscular wheel arches found in the current-gen model. These large wheel arches are nicely filled by 10-spoke alloy wheels and could be 19-inch units as the current model comes with 18-inch wheels. Even the door handles are flush-fitting units, instead of the grab handles found in the current model. While the front fascia will be more of an evolution of the outgoing model, the rear profile will look different with split wrap-around tail lamps.

Previous spy shots have revealed the XUV500’s cabin, which will undergo a much-needed overhaul. The dashboard appears to be clutter-free and is not button-heavy like the outgoing model. In fact, the dashboard styling with its floating touchscreen infotainment and instrument cluster looks eerily similar to the Kia Seltos. The XUV500 will also continue to offer three rows of seats.

The second-gen XUV500 is expected to be offered with two new engine options: the all-aluminium 2.2-litre mHawk diesel and the 2.0-litre mStallion turbo petrol. Both engines debuted in the recently launched second-gen Mahindra Thar. That said, the engines in the XUV500 are likely to be upgraded to develop around 200PS. Both engines are likely to come with manual and automatic transmission options.

The second-gen XUV500 is likely to reach showrooms in the first half of 2021. The outgoing  XUV500 is priced from Rs 13.52 lakh to Rs 19.27 lakh (ex-showroom) and we expect the new-gen model to be priced similarly. The second-gen XUV500 will rekindle its rivalry with the Hyundai Creta, Kia Seltos, MG Hector/ Hector Plus, Tata Harrier, and the upcoming Tata Gravitas.