Joseph Matthews and Zothanmawia managed to clinch the first place in their classes, but not without drama. 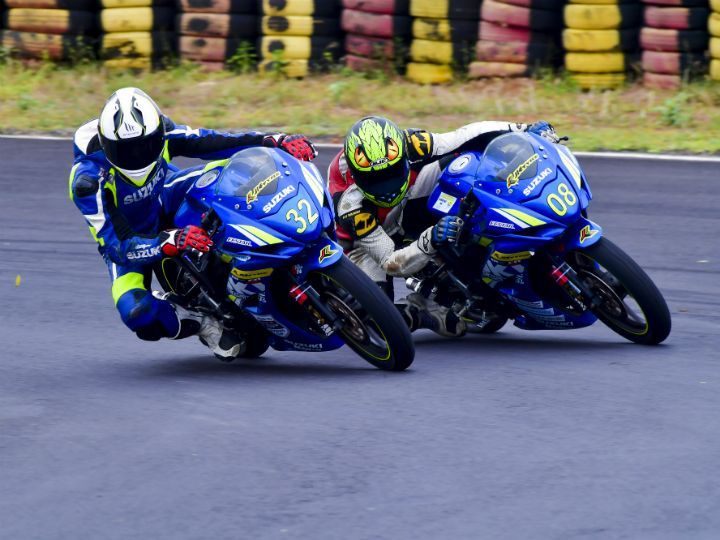 The first thing you notice when you enter the Kari Motor Speedway is the scenic mountains surrounding it and the calmness that comes with it. If given a mattress and a pillow, one can almost go into an extremely relaxing slumber. But tough luck doing that this weekend.

For two days, the 2.1km track came alive with the smell of burning rubber, sound of roaring engines and riders astride the souped-up race-spec Suzuki Gixxer SF (more on that later) zooming past. Here's how the action-packed Round 1 of 2018 JK Tyres’ Suzuki Gixxer Cup unfolded.

For the Red Bull Road to Rookies cup, a nationwide talent search was conducted to find 12 talented and upcoming riders aged between 12 to 16 years. However, in the end, only 8 riders made the cut. Out of the 8 riders, 7 of them were selected from the city of Aizwal, capital of Mizoram. These young riders were then put through a technical course of three days before the event.

On the other hand, the selection process for the JK Tyre Suzuki Gixxer Cup riders (17 and above) took place at the Kari Motor Speedway on 2 July 2018. A total of 22 participants were selected including the only girl in the competition, Haritha Muralikrishnan. They too were put through a technical training session of three days just before the race.

The gloominess of Coimbatore's weather was overshadowed by this talented lot. Both the cups took place in the same grid (Road to Rookies cup had only 8 participants)

Out of this, the Road to Rookies race saw Zothanmawia leading from the get go and clinching first place. He was closely followed by Andy Lalhmangaihsang who came close to grabbing the first place at the podium, but sadly trailed off in the later stages and had to settle for the second place. Jerome Vanlalrengpuia missed out on the second position just by a few seconds.

Meanwhile, the Suzuki Gixxer Cup saw a dramatic finish. Last year’s champion Joseph Matthew left fellow racers behind to bite the dust for the first few laps. However, during the sixth lap Matthew's gear lever broke off and was hanging by the cable for the entirety of the race. This forced him to finish the remaining 4 laps of the race in fourth gear. However, by this time Matthew had already established a healthy lead and finished 3 seconds ahead of Malsawmdawngkiana. Syed Muzamil Ali, who was further 3 seconds behind, finished third. Sadly though, that was about the only drama we saw for the day.

The weather wasn't kind the second day either, with a slight hint of drizzle but not enough to warrant a wet race. Continuing on the same soft compound rubber tyres from JK, the Red Bull Road to Rookies and Suzuki Gixxer Cup coincidentally somehow had the same results.

Race 2 of the Suzuki Gixxer Cup, however, was again packed with drama from start to finish. Joseph Matthew, determined to hold on to his title, continued his impressive run in the first few laps. However, as the race progressed both Malsawmdawngkiana and Syed Muzamil Ali came close towards clinching first place. Malsawmdawngkiana even took the lead by passing Matthew. It wasn't until the last few laps when Matthew managed to get back in the game and create a gap from the second or third place. The second position saw a similar nail biting action with Syed Ali Muzamil and Malsawmdawngkiana swapping places throughout the 10 laps. At the end, however, Syed Ali had to finish second.

With the second race being so closely fought from beginning to end, it may not be very surprising to see a new champion at the end of the competition. The second (August 30th - September 2nd) and third (October 11th - October 14th) rounds will be conducted again at Kari Motor Speedway, Coimbatore. Fourth (November 15th - November 18th) and final round will take place at the Buddh International Circuit, Greater Noida. As always, we’ll be on the ground to bring all the latest updates. Until then, watch this space.