Essentially an extended Creta with a third row, more features, and a more potent petrol engine 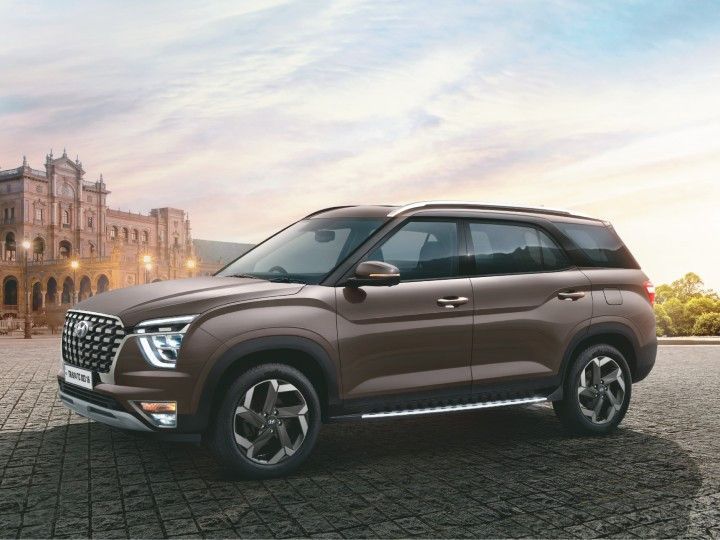 Hyundai has launched the Alcazar in India at prices starting from Rs 16.30 lakh all the way up to Rs 19.99 lakh (ex-showroom). The three-row SUV is available in three trims, eight variants, and eight body shades that include two dual-tone colour options.

Let’s focus on what the SUV has to offer on the outside. The Alcazar is evidently bigger than the Creta; it’s 4500mm long (+200mm), 1790mm wide, and 1675mm tall (+40mm). Its wheelbase measures 2760mm, 150mm more than its sibling. There are some distinct styling elements, including a chrome-studded grille, new fog lamps with LED lighting, silver skid plates on the front bumper, larger 18-inch wheels, and an upright rear with wrap-around LED tail lamps connected by a chrome strip.

The SUV is available as both 6 and 7-seaters. The former has captain seats, while the latter gets bench seats for middle-row occupants. The Alcazar has a 180-litre boot, with all the seats up.

Passengers seated at the back get plenty of creature comforts, including sunshades, headrest cushions, a wireless charger for the second row (limited to the 6-seater), third-row AC vents, and front-row seatback tables. Other features include two 10.25-inch screens for the touchscreen infotainment system and digital driver’s display, BlueLink connected car tech, a Bose sound system, 64-colour ambient lighting, a voice-controlled panoramic sunroof, an air purifier, and an electric parking brake with auto-hold function.

The Alcazar has two engine options: new 2.0-litre petrol that pushes out 159PS/191Nm and a 1.5-litre diesel delivering 115PS/250Nm. The latter has been borrowed from the Creta. Both engines can be paired with either a 6-speed manual or a 6-speed automatic. There are three drive modes (Comfort, Eco, Sport) and as many traction control modes (Snow, Sand, Mud).

Here are the fuel efficiency figures of the two engines:

The Alcazar’s starting price undercuts the 5-seater Creta’s top-spec variant, SX (O), by Rs 1.35 lakh. The SUV will take on the MG Hector Plus, Tata Safari, and the upcoming Mahindra XUV700. Keep following ZigWheels for our review to know what we think of Hyundai’s newest kid on the block.