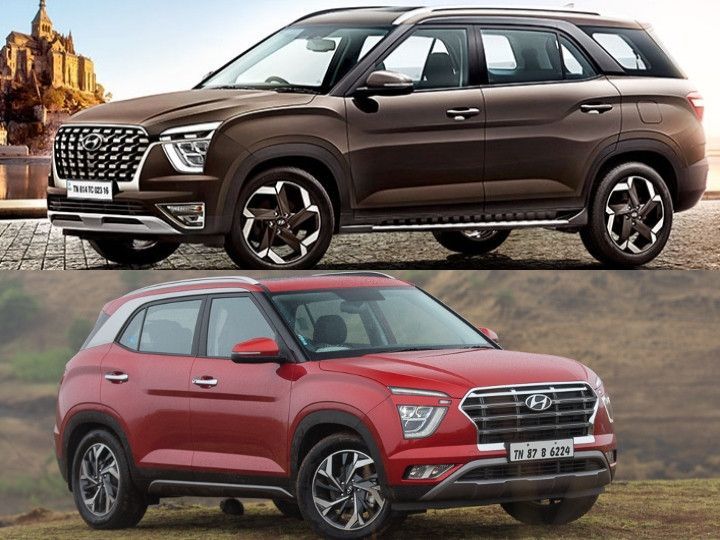 Hyundai has launched the Alcazar SUV in India from Rs 16.30 lakh. At a glance, you’d think it's just a glorified Creta since it is an extended version of the same but the Alcazar does get bits that give it its own identity. Let’s take a closer look:

Up front, while the Creta gets a slatted grille, the Alcazar features chrome studs all over. The fog lamps in the Alcazar are LED units, instead of halogen, and the skid plates are also slightly different.

Head over to the sides and there’s not much that differentiates the two SUVs, other than the extended rear overhang in the Alcazar to accommodate the third row.

A closer look also reveals 18-inch alloy wheels in the Alcazar, compared to the 17-inch units in the Creta.

At the rear, the Creta sports a more curvaceous design with a split-LED tail lamp setup. On the other hand, the Alcazar’s rear is more upright with a conventional set of wraparound LED tail lamps connected by a chrome strip.

The two share an identical cabin layout up front but the Alcazar sports a black-brown colour scheme, instead of the dual-tone black-beige or all-black theme in the Creta.

It’s towards the rear that the real difference lies. While the Creta can accommodate five occupants, the Alcazar is available in both 6- and 7-seater layouts. The former has captain seats, while the latter gets bench seats for the middle row occupants.

The Alcazar also adds in creature comforts, such as sunshades, headrest cushions, a wireless charger for the second row (limited to the 6-seater), third-row AC vents, and front-row seatback tables.

The Alcazar also gets some additional bits, such as a larger 10.25-inch digital driver’s display, more colours in the ambient lighting, a 360-degree camera and blind spot monitoring that helps drivers change lanes safely by providing a live view of the blind spots on both sides.

The Creta takes on the likes of the Kia Seltos, Tata Harrier, as well as the upcoming Volkswagen Taigun and Skoda Kushaq. The Alcazar goes up against the  MG Hector Plus, Tata Safari, , and the upcoming Mahindra XUV700.