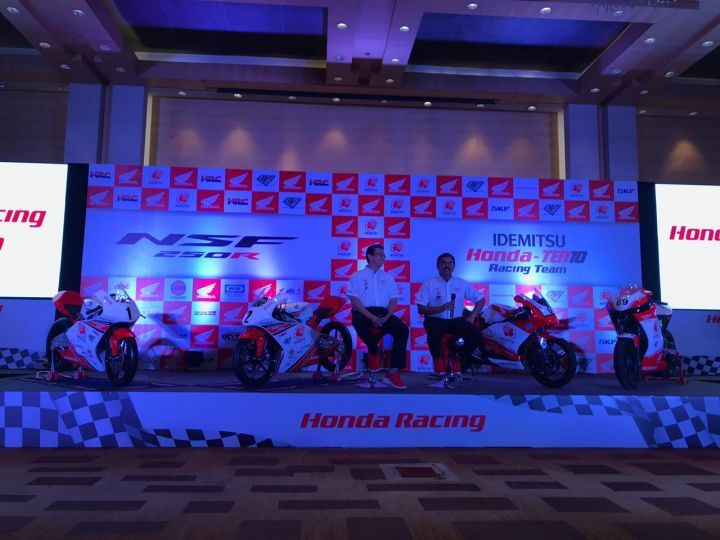 IDEMITSU Honda Racing India has laid out its plans for the 2019 season. While these include both domestic and international participation, the outfit has something phenomenal in store for us this year - it is introducing its famed NSF250R Moto 3-spec race bike in the Indian one-make race arena! The main focus for this year is to develop younger talent at an accelerated pace (hence the NSF250R) and to have a stronger presence on the Indian as well as global motorsport arena.

Honda India NSF250R Talent Cup:
The NSF250R has us properly excited and for good reason. It is the bike that got Honda the constructor's championship title in Moto 3 from 2015 onwards. It is a prototype race bike and boasts power outputs of around 48PS in a frame that weighs just 84kg! Know more details about the NSF 250R here.

Honda has introduced the NSF250R Cup to give its younger crop of racers a hands-on experience of riding a world-class Moto 3 machine and prepare them for international races. For this, Honda has selected eight riders from the 20 finalists who took part in last year’s Honda Talent Cup. These riders are aged between 12 and 19 years!

Honda Talent Hunt:
Honda will conduct their Talent Hunt this year as well. It will be held in five cities and be on the lookout for racers between 13-17 years. The shortlisted riders will then be trained as a part of the IDEMITSU Honda India Talent Cup on race-prepped CBR150R’s.

Participation In Asia Road Racing Championship:
Honda India Racing Team is already a part of the ARRC 2019 season and after three races, they are seventh overall on the points table. The Indian racing contingent is represented by Rajiv Sethu and Senthil Kumar.

Participation in Suzuka 4 Hours:
Honda Racing India will be participating in the famed Suzuka 4 Hours endurance race. For this, it will be teaming up with Auto Technic Japan and will field its top riders Rajiv Sethu and Senthil Kumar. The 4-hour endurance race should give the riders enough exposure and time on track before the next round of ARRC in Suzuka.