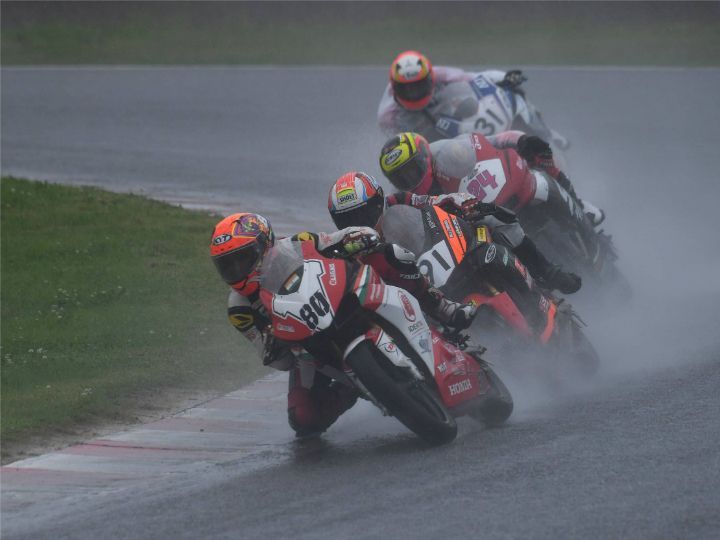 The fourth round of the Asia Road Racing Championship at Suzuka turned out to be a wet and challenging race for competitors. Race 2, in fact, had a lot of riders crashing out due to the tricky track conditions. The Indian team on the grid, IDEMITSU Honda India, had two Indian riders on the grid. Rajiv Sethu finished the Suzuka round with 15th and 14th place finishes in Race 1 and Race 2. Senthil Kumar meanwhile managed to complete the races in 28th and 20st places.

Rajiv Sethu had a disappointing qualifying session, starting a lowly 13th for race 1. While he kept the position at race start, a mistake in the race saw him slip down to 16th during the course of the race. Nevertheless, he was able to gain a position and finish in the points by the end of the race. In race 2, Rajiv suffered with visibility issues as his visor started fogging up. He was up to 7th by the end of lap 1, but due to the reduced visibility, Rajiv fell down to 16th place. A strong end to race saw him climb up to 14th.

Youngster Senthil Kumar is still relatively new name on the international scene and hence his 24th position in qualifying is quite commendable. The challenging conditions troubled Senthil in the first race of the weekend, where he could only climb up a spot. However, he crashed at the final corner on the last lap. He did restart and rode his bike past the finish line in 28th. Race two was better for Senthil as he was able to overtake 4 riders and finish the race in 20th position.

Overall, team IDEMITSU Honda Racing India managed to secure 3 points during the race weekend, bringing their overall kitty to 25 points. They currently are in 9th place in overall standings. The next race is in Zhuhai in China on August 9.