IDEMITSU Honda Racing India To Race At Round 3 Of ARRC

The Honda India-backed racing team will race at FIM Asia Road Racing Championship this weekend at the Chang International Circuit in Buriram, Thailand 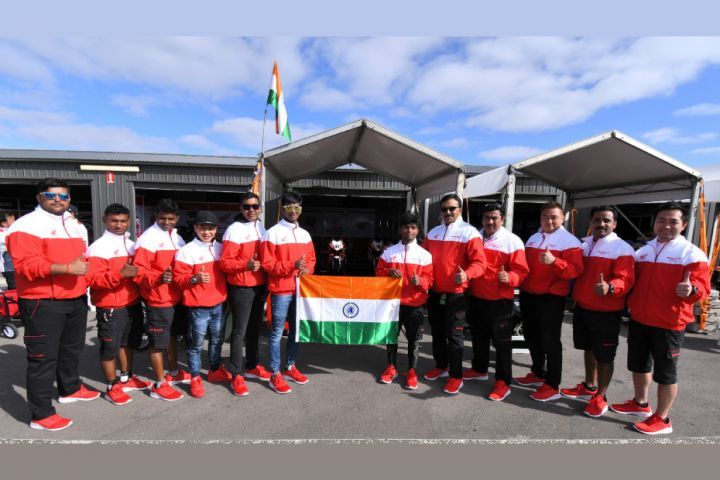 Honda India-backed Racing team ‘IDEMITSU Honda Racing India’ will participate in the third round of Asia Road Racing Championship, to be held at the Chang International Circuit in Buriram, Thailand. The team consists of four Indian riders, Rajiv Sethu, Senthil Kumar, Mohamed Mikail and Kritik Habib. While experienced riders Rajiv Sethu and Senthil Kumar will take part in the AP 250 class, rookies Mohamed Mikail and Kritik Habib will race in the Thailand Talent Cup in the NSF 250 class.

In the previous two rounds of the 2019 season, Rajiv Sethu secured 11th and 13th places respectively while Senthil Kumar secured 14th spot in race 1, but could not finish race 2.  IDEMITSU Honda Racing India currently stands at the 7th position in overall team standings.

Asia Road Racing Championship will have seven races this season. This year saw the introduction of a new rule called balancing various motorcycle concepts rule. Under which, organisers have had to reduce the RPM limit of the top five riders from the overall championship. Introduced to even the playing field, it will see the top two riders from this season have their bike’s engine RPM reduced by 500rpm.

Here is the press release from Honda regarding the same:

Sharing preparations of IDEMITSU Honda Racing India team, Mr. Prabhu Nagaraj, Vice President – Brand and Communications, Honda Motorcycle & Scooter India Pvt. Ltd. said, “2019 is shaping up as the best year for Honda’s solo Indian team at ARRC. Rajiv Sethu is coming of age and is already in Top 12 riders this season, compared to his 27th position last year. Senthil too is riding more confidently on the new machine after 2 rounds. The biggest advantage is that Chang circuit is like a second home for our boys. Both Rajiv and Senthil have raced extensively on this MotoGP track and are aware of its intricacies. Pushing hard, we want to make most of this round and close in top 5 teams this round.”

Leading the ARRC charge in Asia Production (AP250) class is the experienced Rajiv Sethu. After sweeping double digit points for the first time in Australia, Rajiv is being viewed as a serious contender in the 2019 championship. Compared to his 27th position last year, Rajiv is already in top 12 with 18 points so far in AP 250 class of championship.

Backing Rajiv up will be his teammate Senthil Kumar. Marking 2018 as his debut year at Thai Talent Cup, Senthil showed promising results at the Chang International Circuit last year. In his debut ARRC year, Senthil has already won 2 points and is all charged to push the throttle in Chang, an international circuit where he has the strong benefit of prior racing experience.

The Indian duo of Rajiv and Senthil will be racing with 25 of Asia’s top riders from Indonesia, Thailand, Japan, Malaysia, Vietnam, Taipei and India in Asia Production 250cc class.

Meanwhile, the competition will intensify further with the introduction of new Balancing Various Motorcycle Concepts rule. The new rule was created for greater equality among competing motorcycles and balance rider performance of top 5 riders in overall championship. After 2 rounds, top riders of AP 250cc class Aiki Iyoshi (Japan) and Andy Muhammad Fadly (Indonesia) will be the first to achieve the first equaliser (500rpm reduction) while rounding up the top 3 of AP 250cc class is the wonder woman Muklada Sarapuech from A.P Honda racing, Thailand.

Sharing his thoughts, Rajiv Sethu, the experienced IDEMITSU Honda Racing India rider said, “I am both mentally and physically charged up for this round. With the support of complete IDEMITSU Honda Racing India team and my coach Mr. Koyama, Australia gave me momentum and now I want to re-write history by aiming for a podium at Chang – the circuit where I scored my first ever international points. My target is not top 10 finish, I want to push hard and surprise everyone even more this round”

Entering his third ARRC round and the first track where he has ridden before, Senthil Kumar said, “In 2018, Honda gave me my international break in Thailand Talent Cup 2018 which is Honda’s development platform for Asian riders. And in 2019, Honda again gave me a bigger chance in Asia’s toughest championship. With the full backing of my fantastic IDEMITSU Honda Racing India team, I am now much more confident on bike handling. Chang is a familiar track for me. This is my best chance to return to top 15 and eye even higher finish.”

This round will also see Honda’s teenager rider duo of Mohammad Mikail (ranked 15th) and Kritik Habib (ranked 16th) who made their international debut with Thailand Talent Cup (Honda’s development program for Asian riders) get a chance to learn race-craft from Asia’s best.

About the New Balancing Various Motorcycle Concepts rule:
Making the competition even more tough is the new Balancing Various Motorcycle Concepts rule introduced in Asia Production 250 class in 2019. The rule has been created to bring equality among competing motorcycles and balance the performance by adjusting the RPM limit of top 5 riders in overall championship. The first equalizer, a 500rpm reduction to the rev limit will be applied once any of the top 4 riders acquire a 25 –point lead over the other competitors in the top 5. The adjusted RPM limit will stay throughout the season or further adjusted if they are affected by second or third equaliser.

After 2 rounds, top riders of AP 250cc class Aiki Iyoshi (Japan) and Andy Muhammad Fadly (Indonesia) will be the first to be affected by the first equaliser (500rpm reduction).