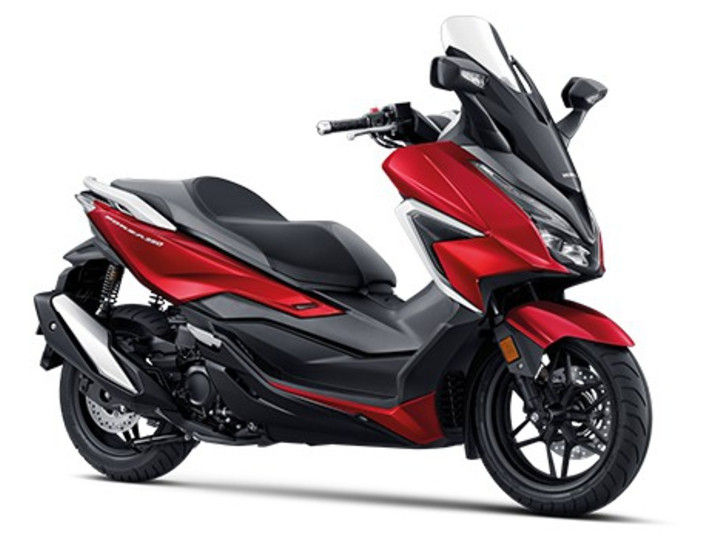 Honda has launched its new Forza 350 maxi-scooter in Thailand. The Forza 350 is the replacement to the Forza 300 and gets a larger motor. Here’s what you need to know about this new maxi scooter.

At first glance, the Honda Forza 350 looks similar to its predecessor. However, its body panels have been reworked. Honda claims the new bodywork is more aerodynamic than before. It is 109mm shorter thanks to a smaller windshield and 2kg heavier than before, at 185kg (kerb). Its 147mm ground clearance is 3mm taller while the 11.7-litre fuel tank now holds 0.2-litres more fuel. Seat height remains an accessible 780mm.

The Forza 350 continues to get the Forza 300’s features with some improvements and additions. It continues to use an electrically-adjustable windscreen which now has 150mm of height adjustability. That is 40mm more than before. The previous mobile charging socket on the front apron has been replaced with a more convenient USB charging socket. It continues to use all-LED lighting with the tail lamp getting emergency stop signal (ESS) that rapidly blinks when you brake hard. Other features include keyless ignition and a semi-digital instrument console with two analogue dials and a central LCD screen that shows average fuel consumption, odometer, trip meters and even maintenance alerts.

Gets an all-new motor:

Powering the Forza 350 is an all-new 329.6cc liquid-cooled and fuel-injected single-cylinder motor. Compared to its predecessor, the Forza 350 gets a 50cc larger motor. The all-new engine features a larger 77.0 x 70.7 bore and stroke compared to the previous 72 x 68.6 configuration. The compression ratio remains unchanged. Honda claims the new motor features less friction than before and gets a larger airbox and free-flowing exhaust than before. Honda has relocated the radiator from below the seat to the front. This allows for better airflow to the radiator as well as better weight distribution. The bikemaker has not mentioned the new power outputs but claims that the Forza 350 delivers more than the previous 25PS and 27Nm. The CVT gearbox and traction control system have been retained.

Shares its underpinnings with the Forza 300:

The Forza 350 uses the same underbone frame with telescopic forks and twin shock absorbers. It even has the same rake and wheelbase as before. It continues to use a 15-inch front and 14-inch rear alloy wheels with 120/70-15 and 140/70-14 tubeless tyres. Braking is via disc brakes at both ends with dual-channel ABS.

Will it come to India?

Earlier this year, Honda India had revealed plans to launch the Forza 300 here. It even delivered four units of the BS4 Forza 300 scooters to customers. However, with the switch to BS6 norms requiring extensive updates to the motor and heavy localisation required to bring the price down, the prospect of Honda launching the Forza in India appears bleak.