There I was all excited for my first Ferrari drive. But, Mr Murphy decided to intervene and cause delays, resulting in peak traffic congestion and some strong showers. Here is how it went. 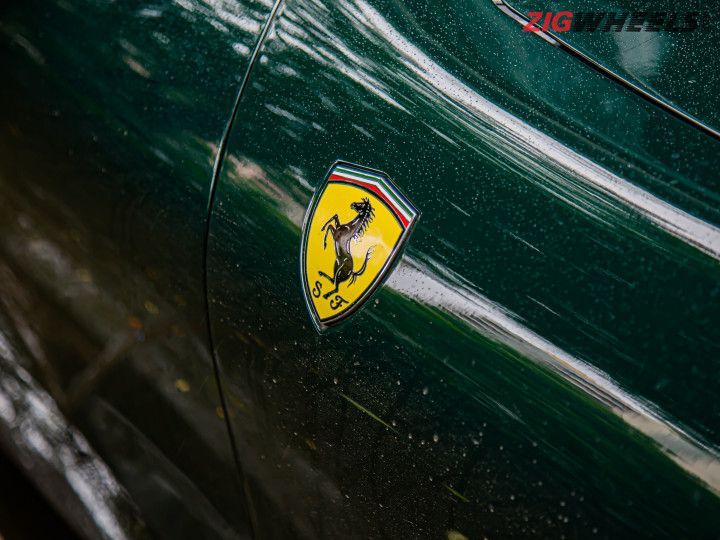 No one becomes an automotive journalist dreaming of driving compact hatchbacks and reporting on how and why the quality is… well, what it is. That is what we call part of the job. We become auto journos for the days we get to drive exotics, as cliche as that sounds. Days like this.

Back in 2015 when I started this job, I remember reading the Audi RS 6 Avant review that the team had done and wanting so eagerly to drive these cars myself. Luckily for me, I got to drive something even better - a Lamborghini, as early as three years into the job. I drove the Huracan Evo back in 2018 at the MMRT and what an experience it was! So when I got a call from the Associate Editor asking (rhetorical of course) if I would want to drive the Ferrari Roma. The answer was a gleaming smile and a very cheerful yes!

We already had a very hectic week shooting the Safari vs Alcazar and now it was time to travel to Mumbai for the Ferrari Roma. Like a geek, I had gobbled up the spec sheet in anticipation of the drive. After all, I was about to get my hands on a Ferrari for the first time! On the 150km drive there, production informed us of a storm warning for the entire day in Mumbai (bad news numero uno), though it would hit the shoot location only later in the day. That did not taint my enthusiasm, though, as we were supposed to start driving by 1 PM when the traffic at BKC is pretty manageable.

We reached the dealership and there she was, sitting pretty in a British Racing Green shade outside the showroom. From the pictures that were circulated beforehand of the Roma, I was a little bummed that my first Ferrari experience wasn’t going in the iconic red but a rather un-Ferrari like green. Despite the weather predictions when we reached the location it was still sunny, making the green colour pop. Nevertheless, the Roma looked as gorgeous as I had imagined. But then, bad news numero dos came from the Ferrari spokesperson that the shoot had to be delayed by at least a couple of hours. Despite the storm still chasing us, we were still optimistic about finishing it in time. We sat and waited for what was a very long three hours before getting a call that the Roma would see us now. And at that very moment, lightning struck.

A light shower had already started as we walked from the parking lot to the green Roma, but the tiny drops of rain on the Roma’s impeccable paintwork only made it look better. A brighter colour on this overcast day would have surely been more Ferrari-like but we weren’t complaining. We started with our static shoot which was taking longer because of the ever-increasing rains. There was no question of shooting a video but we decided to take as much footage as possible - that you can now find on our Instagram page.

All this while, I was still in awe of the Roma. The curves on the body, the finish of the paint and the details of the lights. The Ferrari emblem sitting prominently on the grille and the logo with the yellow background on the nose were certainly the highlights. I mean, we have all seen them in magazines and on videos, but the gloss and the quality of these badges can only be felt with a touch. The 20-inch 245/35 wheels had yellow brake callipers which matched the Ferrari logos on the fenders.

Push the handle and the frameless doors greet you inside. And once seated, the biggest shock to me was, again, the quality of the cabin. Right from the bucket seats, to the Alcantara upholstery and every single button and panel felt like it belonged to this car. The low seating position makes you feel a part of the car, and the steering, with all of its buttons and lights, lit my mood up like a Christmas tree. The large paddle shifters feel premium to hold, and there are no indicators or wiper stalks. Controls for all of these are mounted on the steering wheel, understanding which can take a while, as I learned later. But this does make you feel like an F1 driver. The best control, though, is the red drive mode selector.

The digital driver’s display is as good as many tablets in the market, and the central touchscreen, in its vertical orientation, even looks like one. There is a third screen in the cabin as well, in front of the passenger seat which lets them keep a tab on the speed, media and other car functions. And then comes the gear selector. While it looks like an H shifter, the selector is a joystick and when you push it in a direction, a bolt of light travels in the channel to confirm the selection. Pretty darn cool.

And then, it was time to take the car out for a drive. But because by now it has started to pour a bit heavily, Ameya took the wheel first. After all, he has plenty of experience driving sportscars. It was now past 5 PM and the streets had started to fillup with impatient bikers and taxis. This only added to the number of butterflies I had in my stomach, to begin with. We followed the Roma in a camera car as it left the dealership and merged into traffic. I kept staring at it from different angles as it got crowded by a million bikes. Still, standing out in traffic. And it doesn’t look as wide and long in pictures, watching them in traffic just puts this size into perspective. And not to mention, all eyes were on the Roma. And when in motion, the active rear spoiler comes out at higher speeds and gets vertical for added braking. Ooh-la-la.

Soon, Ameya pulled over and waved me in. I still remember nervously walking towards the car not knowing to be excited or scared. I would not only have to deal with the rain, tolls, traffic and u-turns but also place the car correctly for the camera. And then there is the Rs 3.76 crore price tag, with a further Rs 2 crore or so in optional extras to consider. But as soon as I was seated and the exhaust note of the start-up hit my eardrums, all these thoughts vanished. I was just in it to drive.

We hit the famed Bandra-Worli sea link first, and the 8-lane stretch of seamless tarmac was the perfect place for me to get familiar with the Roma. The best part here was that the Roma felt so easy and natural to drive. In Comfort mode, the throttle felt tame and the steering too light, so if you start going heavy on the throttle, the acceleration won’t scare you. But get aggressive and the Roma will remind you that it is a prancing horse. It makes sure you know it packs 620 horses under the bonnet, and is capable of a 3.4-second 0-100kmph time. Poking them in an absolutely wet condition, in a rear-wheel-drive sportscar wasn’t something I was going to do. The gear shifts could be felt with a positive jolt in the body and using the paddle shifters was an absolute delight.

On this open road, the Roma felt alive and gave me immense confidence. But soon, we had to get off the good tarmac and onto regular Mumbai roads. The visibility around is always a challenge in such cars but the wing mirrors on the Roma let me make lane changes without heart attacks. As soon as we hit some broken patches, what became apparent was that the Roma's suspension tune was fitting for the grand tourer it claims to be. The level changes and broken tarmac were dealt with a sense of plushness and there was very little harshness in the cabin. Also, the suspension was absolutely quiet.

The size factor soon started to come into play on the narrower crowded streets. The Roma had no issue just happily crawling at low speeds but the bikers around found it particularly amusing to cut it off. The large bonnet which houses the 3.9-litre V8 has bulges along the side which looks ooh-so-good from the driver’s seat but makes judging the end of the bumper hard, especially in over-enthusiastic traffic.

While I was busy dealing with the traffic and potholes, the rain gods decided to test my driving skills further with a heavier shower, at which point I had to look for the wiper controller on the steering. It was this little metal rotary dial rich in quality, but as mentioned earlier, really hard to locate on the move. That task accomplished, we soldiered on to then deal with traffic signals before finally reaching the dealership to conclude our approximately 20km drive.

While this experience wasn’t enough to do a complete review, a few things stood out. The quality of the cabin is on par and even surpassed that of luxury cars in certain places. The display of the screens, materials and textures all add to the dramatic experience of the cabin. And finally, the exhaust note, when you fire it up, lets you know the underlying intentions of the Roma.

The Roma, while showing hints of its tamed aggression, is really well suited for the city. The power delivery is as calm as a hot hatchback when you want it to be and can launch you forward when you ask for it. The suspension is comfortable even for Indian roads and the overall visibility, even with pouring rain and heavy traffic, is clear and manageable. La Nuova Dolce Vita, the tagline for the Roma roughly translates to ‘new sweet life’ in Italian. Even this short drive was enough to let me tell you how sweet it certainly is.