The Huracan has been hit by a major dose of horsepower, downforce and oodles of tech. We drive the Huracan EVO on India’s most popular racetrack to figure the impact these updates have had on the ‘humble’ sportscar 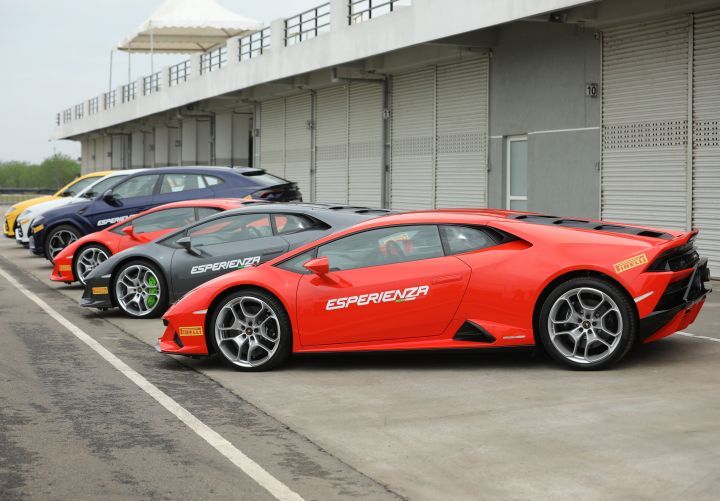 Back in 2014, when the world was introduced to the Lamborghini Huracan, it left many of us impressed but also wanting for something wilder, something more Lamborghini. Then in came the Performante and set a new benchmark for supercar performance. And with such a hard act to follow, would Lamborghini stop at just a little nip and tuck for the new Huracan? No way! So the Huracan EVO gets the engine from the Performante, tech from the Aventador S and even some design cues from its famous forefathers. Is evolution just a theory? Only one way to find out.

A simple glance of the car will force you to hold your gaze. While the EVO can be immediately recognized as a Huracan, and more so as a Lamborghini, there have been some changes to the exterior to make it look fresh. The air dams are now wider and get the ‘Y’ design, reminiscent of the headlamps. From the side, we did miss the new black 20-inch Aesir rims which were on the international show car and the silver ones here just don't match up.

At the back, the Huracan looks raw. There is a big black mesh covering the entire rear which leaves the exhaust system behind the engine partially exposed. The exhaust tips too feature a mesh pattern and are positioned high up in the car’s rear bumper as seen on the Performante. There’s a small fixed spoiler along with clever ducts on the front, side and rear, which direct airflow around the EVO in the most aerodynamic manner. The result of all this trickery is 7 times higher downforce than before. That's 700 per cent!

The Huracan has carried forward the iconic 5.2-litre V10 it has been using since the Gallardo days. But over the past 11 years, the engine has been updated a lot. Compared to the older Huracan however, the EVO is now running titanium intake valves, a lighter exhaust system and the Performante’s higher-output tune of 640PS and 600Nm. There’s a new brain too: the Lamborghini Integrated Vehicle Dynamics (LDVI) system. This makes calculations every 20 milliseconds based on real-time updates from the adaptive magnetorheological suspension, all-wheel drive, all-wheel steering (new), torque vectoring system and traction control.

A sense of occasion

Inside, not much has changed in the Huracan except for that large touchscreen. The 8.4-inch vertical touchscreen is now the home to all creature comforts and drive data. It controls the climate control and audio with multi-touch inputs - like two-touch volume control and three-touch mute. But the most interesting bit is the LDVI screen which gives live data like front and rear steering angle and the power to each axle.

The steering is wrapped in Alcantara and feels fantastic to hold. The large display for the instrument cluster has clear readouts. And all other toggle controls instantly drop your age by at least 15 years. Oh wait, that would make me 10 years old, but then again I’m not your regular Huracan buyer who can spare Rs 3.7 crore. You don't even have to lift the red flap to get to the starter button, but just for the drama and the occasion, I guarantee you will, every time. Which is exactly what I did.

It's an event every time you sit in a Lamborghini and push the starter button. With the Huracan EVO, it's become even more special. With more power and a sportier exhaust system, the EVO wakes up with a much louder rumble. That's when the 30 more horsepower make their presence felt for the first time. Rolling down the pit lane behind the Urus pace car, I was really nervous. Having never driven such a powerful car on the track, the thought of the experience being overwhelming was in my mind. But as soon as I got on the gas, it began to fade away. That's because the Huracan EVO by default starts in the Strada drive mode, which translates to Street. And among other changes, Lamborghini has made the Huracan EVO an easier car to drive every day.

The gearbox quickly jumps up ratios and before you know it, the 7-speed DCT is already running in the 6th or 7th cog. Even when you go hard on the throttle, it downshifts to 6th, or at the very least to 5th, and gets the car moving in a very controlled pace. To get any sort of excitement or pace, you will have to manually shift down via the paddle shifters. The V10 also barely makes a sound and the entire experience was almost, dare I say it, boring on the track. But, in all fairness, it’s going to make living with the 640 horses a lot more domestic and also allow for conversations at a more natural volume.

But we were on a racetrack and weren't particularly interested in domestic. Toggle the mode to Sport and the Huracan EVO begins to show its true colours. The engine note immediately changes, the throttle becomes more responsive, the gearbox kicks down to a sensible gear and the exhaust pops and cracks like an action sequence in a Tarantino movie. Start going heavy on the throttle and the Hurricane accelerates with a purpose along with a glorious sound from the engine. And if you go all the way in with the throttle you’re slammed firmly back in your seat and before you know it, you are closing in on 150kmph on the clocks.

Here, the brain of the car is optimized for most fun. This means the rear-wheel steering will steer in the opposite direction of the fronts to allow you to slide out. The steering too feels a tad lighter than in Corsa mode, which lets you have more fun without much effort. While a slow lead car meant we were going nowhere close to being sideways, the playfulness of the EVO was still apparent. Getting even a little aggressive with the throttle meant you can feel the EVO begin to go sideways, with the screaming V10 only adding to the drama. Sport still leaves some of the electronic nannies on and they graciously let the car slide a bit before optimising traction and pushing you off in a straight line, flattering almost any driver.

These couple of seconds in every corner are quite literally the most exciting moments I have had in any car. If the Urus pace car would have allowed us to go faster, you would have seen some smoke in the pictures.

Toggle to Corsa and there is a BIG change to the Huracan’s character. It doesn't sound friendly or playful anymore. The engine growls and the instrument cluster changes to a screen with a large tachometer and speedometer, pushing away all the distractions. The new LDVI system studies the driver’s moves and predicts future actions, and in this mode it works over time to put every ounce of that 640 horses down to the tarmac. Also, this is the only mode where you have to manually shift up, while the other two leave you with the option to ignore the massive shift paddles.

The tiniest of the throttle inputs at slow speeds made the EVO lunge ahead. The 0-100kmph sprint in this mode takes just 2.9 seconds. The car propelled ahead with the engine screaming right behind you. You are now thrown back in you seat with even more violence as the tacho races up to 7000 rpm and you grab for the paddle shifter. Gear changes are harsh and can be felt in every joint of your body and seems to even transfer to the chassis as the Huracan screams down the back straight. This time when I looked down, the needle was close to 180kmph.

Brake hard and turn, and the drama is replaced by action. The EVO fights for traction and the torque vectoring sends power to the appropriate wheel to optimise grip. This is felt inside the cabin as you now have to work harder on the steering to keep the car stable. Getting on the power mid-corner will make you heart skip a beat as the EVO becomes a bit violent, a mistake I won’t make again. Even the brakes feel sharp with good progression as well. And while exiting a corner might not not leave you with enough time for a smile, it keep you determined to attack the next one even faster.

Given that every one of our laps were paced, we didn't even come close to pushing our, let alone the car’s, limits on the race track. As an experience, it was pure joy and it's incredible how a car can be so docile and then at the simple toggle of a switch change into a complete beast. 640PS, rear wheel steering, all wheel drive and the new LDVI system makes the Huracan Harley Quinn in Sport mode, and Batman in Corsa. The new Strada mode should even prevent your mistakes from showing up on YouTube as well.

The best time I had was with Harley Quinn. Even at the speeds we were doing, the EVO let us slide a bit in the corners and remind us why we love cars and villains so damn much. The engine is now more powerful, the electronics are smarter and the exhaust note is glorious. This, then, is an evolution. But by how much? That can only be answered once we are left with the car without a leash.