Ferrari’s first-ever SUV will rival the Lamborghini Urus, Audi RSQ8, and Porsche Cayenne when it goes on sale sometime in 2022 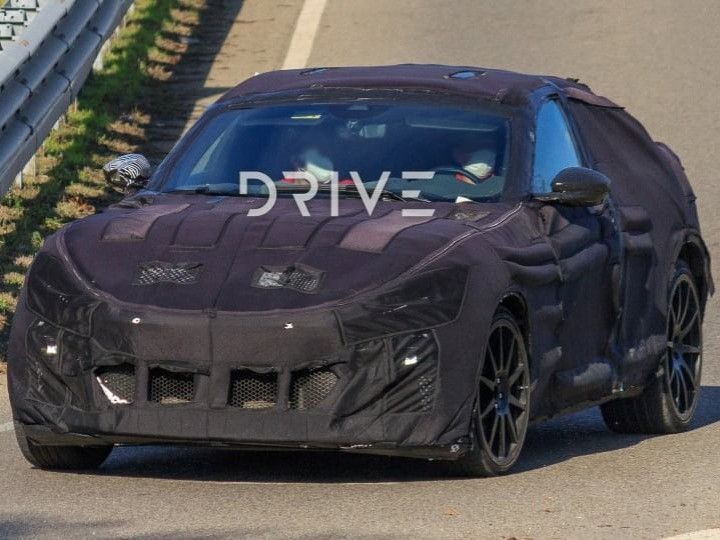 The Ferrari Purosangue SUV has been spied in its production-ready form. It’s the first SUV built by Ferrari, likely to be launched sometime in 2022. Super-SUVs such as the Lamborghini Urus, Audi RSQ8, Porsche Cayenne, and Aston Martin DBX will be the Purosangue’s chief rivals.

Despite the heavy camouflage, the test car’s sloping roofline and long bonnet are distinctly visible. At the front, it seems to have a large air dam and Ferrari Roma-esque thin headlamps. The spied vehicle seems a bit low-slung for an SUV, so it could be more track-focused, with limited off-roading capability. It also gets a sloping roofline unlike an upright stance like the Porsche Cayenne.

We can’t see much of the rear except quad exhaust exits, but notice that the 10-spoke rear wheels are wider than the front wheels. Reports suggest that the Purosangue SUV may be equipped with a rear-mounted transmission and a rear-biased all-wheel-drive (AWD) system.

Under the sheet metal, the Purosangue is reportedly underpinned by an elongated version of the Roma supercar’s platform. It frees up more room for passengers, and it’s apparent from the test mule that the SUV will have a five-door layout. The platform is also capable of supporting a plug-in hybrid powertrain, so we might see a plug-in version of the SUV at launch or later in its lifecycle.

Similar to the Urus, the Ferrari SUV could be powered by Ferrari’s 620PS 3.9-litre turbocharged V8 petrol engine. There are rumours that Ferrari’s 6.5-litre V12 engine could be offered at launch. With 800PS and 718Nm, the V12 would make for a seriously fast SUV.

The test model has flaps over the fuel fillers on both sides, possibly hinting at a plug-in hybrid powertrain. We’ve seen the V8-hybrid combination in the SF90 Stradale -- it has three electric motors (one at each front wheel, one at the transaxle) that together produce 220PS of zero-emission power. Ferrari’s 7.45kWh battery can also be found in the V6-equipped 296 GTB, where it’s even capable of running the car for 25km on all-electric power!

We’ll have to wait for an official announcement to know which powertrain(s) makes it to the production model. Whenever it does make it to India, the Purosangue is likely to be priced exorbitantly, possibly north of Rs 3 crore. It’ll rival luxury and performance SUVs such as the Bentley Bentayga, Rolls Royce Cullinan and Range Rover Sport, apart from the aforementioned DBX and Urus SUVs.