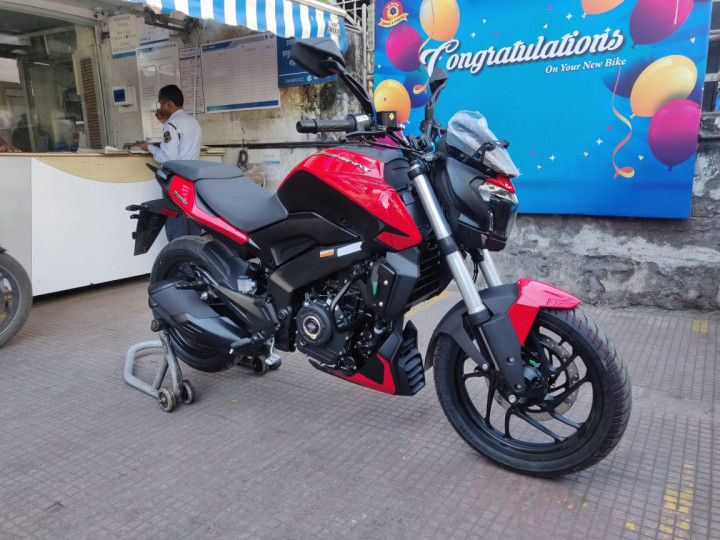 The Bajaj Dominar 250 comes in at an attractive price point, but it isn’t without some cost-cutting measures. Here are five important points that will help you understand the differences between the 250 and the 400.

Gets a new colour scheme:

To differentiate the Dominar 250 from the 400, Bajaj has introduced a new Canyon Red paint scheme. Weirdly enough, the bike shares the same Vine Black colour with its elder sibling which defeats the purpose of trying to differentiate the two.

The quarter-liter cruiser shares a couple of features with the Dominar 400 which includes LED lighting all around, a twin-barrel exhaust, perimeter frame and bungee straps tucked under the seat. However, there are areas where the brand has cut corners to lower costs. For instance, the tank-mounted console which features tell-tale lights is from the previous-gen Dominar. In essence, it misses out on extra features like instantaneous fuel consumption and a gear position indicator.

Other than this, the dual-tone alloy wheels seen on the 400cc sibling have been replaced with simple matte black finished ones.

It's powered by a smaller BS6-compliant 248.8cc single-cylinder DOHC engine borrowed from the KTM 250 Duke. However, it's been tuned to generates 27PS power at 8500rpm and 23.5Nm of peak torque at 6500rpm. Thanfully, the bike retains the 400’s 6-speed transmission with a slipper clutch and 13.5-litre fuel tank. According to Bajaj, the powertrain is powerful enough to dart from 0-100kmph in 10.5 seconds and achieve a claimed top speed of 132kmph.

Features aren’t the only area where Bajaj has saved costs. Changes extend to the bike’s hardware as well. For starters, the Dominar 250 comes equipped with a slimmer 37mm USD fork compared to the 43mm unit on the 400. The rear monoshock now sits on a box-section swingarm as opposed to the stamped metal swingarm on the Dominar 400.

The culling of certain features and components has helped Bajaj price the Dominar 250 at Rs 1.6 lakh, which makes it Rs 30,000 cheaper than its 400cc sibling. However, if you compare the quarter-litre cruiser to rivals like the Suzuki Gixxer 250 and Yamaha FZ25, it still offers more equipment, better features and a sophisticated, liquid-cooled engine.