What’s up with that headlight, though? 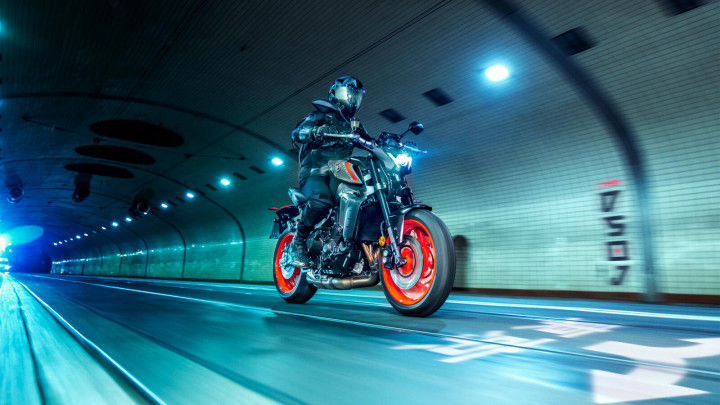 The Yamaha MT-09 was an underappreciated middleweight naked in the Indian market. What it packed though was enough to give the Triumph Street Triple RS and the KTM 790 Duke a good run for their money. Now, there is a new one revealed in Europe. It promises to be lighter, more mental and a lot safer too. But is that going to be enough to divert your gaze away from that oh-so-striking face?

Yamaha has taken quite a radical approach with the styling of the front section of the bike. We haven’t taken to the new LED face quite so readily: the old praying mantis face was such an enchanting one. The tank extensions are shorter, the tank doesn’t look as sharp as the older one and the Deltabox frame is more exposed, giving the bike a more mechanical feel. The lack of a chunky rear or visually delightful elements there continues to be the case still on the updated MT-09. In contrast to the in-your-face front, the rear looks quite plain jane.

It gets quite a small 3.5-inch TFT screen. No connected features here, Yamaha skipping this aid for the naked. The font size does seem a bit too small to read on the fly, especially for bits like the TCS and rider mode. Overall, it gives off a very early days of the LCD dash vibe and not a modern interface like on the BMW F 900 R or the Triumph Street Triple RS.

In order to meet EU5, Yamaha has bored out the cylinders by 3mm more to displace 889cc now. With the extra 42 cee cees, the new triple powerplant now puts out 119PS at 10,000rpm and 93Nm at 7,000rpm. That’s 4PS and 5.5Nm more than the older 847cc engine, peak torque now kicking in 1500 revs earlier. The first and second gear ratios are taller in the six-speed gearbox that now gets a bi-directional quickshifter as standard. Despite the gain in capacity, this new engine (including its exhaust system) is 1.7kg lighter than the older unit.

Keeping up with the times, Yamaha too has introduced lean-sensitive rider aids, courtesy the six-axis IMU. The traction control, slide control, wheelie control and ABS intervention levels are all calibrated more precisely with the IMU.

In order to accommodate this larger engine, Yamaha has had to tweak its hallowed Deltabox frame. You also get a new subframe (even though the seating area looks pretty similar) and swingarm, the latter now going for a more symmetrical look. All three elements here are made from high strength aluminium. By opting for aluminium, the 2021 MT-09 now tips the scales at 189kg, saving 4kg in the process.

The one area where we felt the older MT-09 fell short to its rivals was the kit on offer. Lack of sophisticated suspension was its Achilles heel. Yamaha has improved the hardware level on the new bike but it is still a rung or two lower than the competition. The KYB-sourced USD fork and monoshock have revised spring rates and the fork is fully-adjustable. Dual 4-piston radial calipers chomp on 298mm rotors at the front. A new front radial brake master cylinder should improve braking feel to a great extent.

Yamaha India should be bringing in the new MT-09 by mid-2021, hopefully. Since Yamaha doesn’t have CKD operations for its big bikes yet, this naked will be brought in via the CBU route and hence remain pricey. Expect Yamaha to quote a price tag of around Rs 11.5 lakh for the new model, which puts it directly in the crosshairs of the Street Triple RS. While our comparison between their older generation models made us lean towards the Triumph, could the scales tip in favour of the Yammie now? We just can’t wait to get our hands on both.