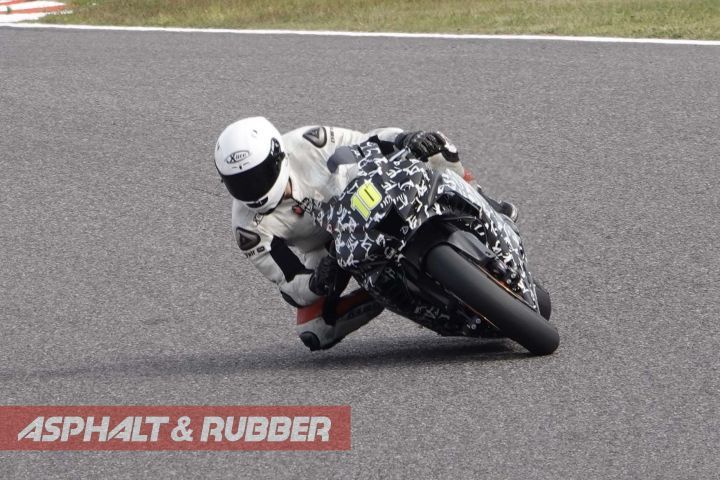 While Honda’s stall at the Tokyo Motor Show was slightly underwhelming, we can expect big things from the manufacturer at EICMA next month. That’s because the 2020 Honda CBR1000RR has been spotted testing at Suzuka, and it looks quite close to completion. The heavily camouflaged test mule was seen putting in some seriously quick laps, likely in the hands of HRC test rider Stefan Bradl.

Quite a few things are all-new on the bike, but let’s start off with what isn’t. The twin-spar aluminium frame looks very similar to the unit seen on the current model, and that isn’t necessarily a bad thing. The frame isn’t the weak link on the current 1000RR, it’s the engine. While the European competition has long since breached the 200PS barrier, the Fireblade continues to put out just 191.7PS. That seems to have been addressed now, with an all-new engine on this test bike. While it is still a flat-plane inline-four motor, the engine covers are different, as is the gear-shift linkage and pivot system. The plastic shrouds behind the shift arm are different as well.

Another immediately obvious difference is the bodywork, which now also features small enclosed winglets near the top. These look almost identical to the drawings of the active aerodynamics package seen in patents filed by Honda last month. The shape of the fairing is new as well, and while the current bike gets a small air-intake on either side of the front fairing, the prototype at Suzuka featured just one large central air-intake. This is quite similar to the design seen on the CBR600RR.

It is also worth noting that Honda’s RC213V MotoGP bike for this year routed air through the headstock rather than around it and in through the frame spars as done previously. This allowed a much more direct passage to the air box which in-turn boosted horsepower significantly. Power has been the CBR’s shortcoming for many years now and perhaps Honda is using the lessons learned in MotoGP to help bump up output on the CBR.

In terms of underpinnings, the test mule employs a Showa SFF-BP separate function upside-down front fork, and though the shock isn’t clearly visible, we expect it to be from Showa as well. The bike also featured a suspension stroke sensor at the front, which is very interesting. These sensors have two main applications - they are used for testing and collecting data, and they are also used in adaptive electronic suspension systems. Perhaps the data is just being collected for testing purposes, or perhaps there will be a higher-spec variant of the CBR with electronic suspension.

The brakes are a similarly intriguing affair, because the test mule is running Brembo GP series calipers. These are absolutely top-spec CNC-machined, nickel-plated calipers that are derived from MotoGP and used in the Moto2 world championship as well as World Superbike and World Supersport. They will set you back by a cool $3,000 (approx Rs 2.13 lakh) for a set. So either the bike being tested is a race-bike, or Honda will give us an extremely high-performance variant of the CBR.

The race-bike theory has some merit since the trailer spotted in the Suzuka paddock wasn’t a Honda Motor Co. trailer but an HRC trailer. This would also justify the suspension stroke sensors since race bikes use these for data-logging purposes.

While the actual specifications and underpinnings might be in question, there is no doubt about the fact that Honda is indeed bringing us a new CBR1000RR very soon. With EICMA coming up in a couple of weeks’ time, Honda has the perfect global platform to unveil its new superbike. We shall keep our fingers crossed while the WSBK engineers at Kawasaki and Ducati endure sleepless nights.