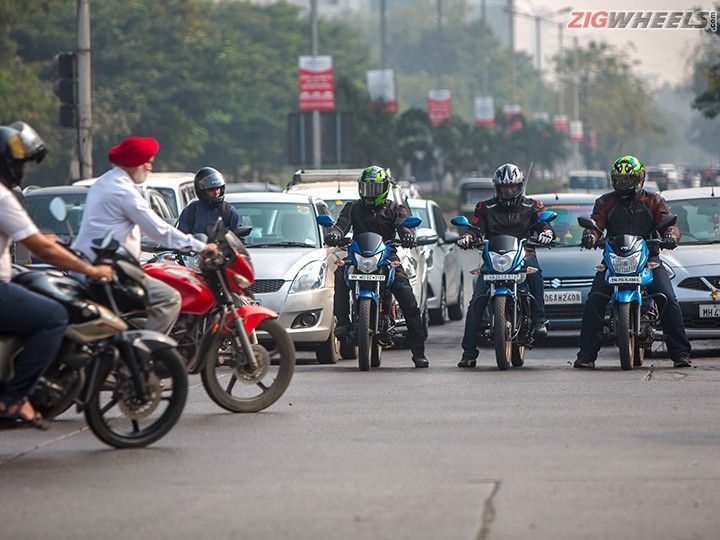 Hero MotoCorp’s Splendor is quite literally a case study in itself. Ever since its launch in the early 1990’s, the Splendor has been a success story for Hero-Honda then and Hero MotoCorp now. Over the years, the Splendor brand has witnessed many changes, with new models being introduced, and what we have with us is its latest iteration – the Splendor iSmart 110. The new offering from Hero has been positioned as a stylish and feature-rich commuter bike and it has the tough responsibility of carrying forward the Splendor legacy ahead. The task on hand isn’t easy as it faces stiff competition from new generation commuter offerings – the Honda Livo and the new TVS Victor.

In terms of design, most commuter motorcycles are boring to look at, since for the longest time manufacturers believed focusing on functionality than form. Gladly, with modern commuter bikes, this thought process has changed. The Honda Livo is easily the most beautiful bike in this comparison. It has the most balanced design and proportion while the sharp looking headlight and tank extensions make it stand out amongst its rivals. The new Hero Splendor iSmart 110 comes second with respect to visual appeal. The sharp looking headlight does make it look attractive while the clever use of graphics means that it manages to grab eyeballs. The TVS Victor is a good looking motorcycle too, but the design is pretty similar to that of the Star City+, despite the more premium positioning of the Victor and could be a deterrent for some.

Talking about features, the Splendor iSmart 110 is the first motorcycle in its segment to get AHO (automatic headlight on), which means the headlamp illuminates the moment the engine is turned on. The most interesting feature of the new commuter bike is the i3s, which stands for idle start stop system. It’s a simple yet effective system: once you halt, engage neutral and the bike shuts down after 5 seconds. Hold the clutch to engage 1st gear and the bike restarts.

This tech saves you the trouble of having to switch off the engine at traffic signals or when stuck in traffic, and helps improve mileage. The Splendor iSmart 110 and the new Victor employ semi-digital instrument consoles. The TVS offering is the only bike in this comparison to get tachometer while the Splendor features side stand indicator. The Honda Livo has a basic analogue unit but the hexagonal shaped instrument console pods look good. The Victor is the only bike in this segment to get hazard lights that can be activated via an engine kill-like switch on the right hand side, which we admit is a bit confusing. Switch gear quality of the Hero and Honda offering is crude and basic but the one on the TVS looks premium while the choke knob is also mounted on the handlebar.

The basic engine structure on all three motorcycles is similar, with all three employing single-cylinder, 110cc, air-cooled engines, mounted vertically. We are glad that Hero has finally mounted the engine block vertically, since the Splendor’s old cylinder block was always mounted horizontally. In terms of performance it’s the TVS Victor that leads the pack, offering better acceleration and mid-range grunt. Not surprising when you consider the fact that TVS has employed a 3-valve head in the new Victor, enabling it to boast the highest power and torque outputs here. Talking of which, the Victor leads the charge with 9.6PS and 9.4Nm, the Hero comes close second at 9.5PS and 9Nm of peak torque while the Livo comes last at 8.2PS and 8.6Nm.

The Hero motor is the most refined but it does sound a bit gruff at higher rpm. The Victor’s motor has acceptable NVH levels while the Honda motor needs to be revved hard to extract power and the lack of torque is evident while climbing bridges. That said, all three motorcycles are comfortable doing 60-70kmph on open roads, after which they begin to feel strained. All the three bikes employ a 4-speed gearbox, with the unit on the Victor feeling the best, followed by the Splendor, while the Livo’s transmission felt notchy. Another feather in the Splendor’s hat is that it is the only engine here to be BS IV compliant.

Being commuters, all three bikes have an upright and relaxed riding position. The Honda Livo is the most comfortable of the lot as its handlebar is set higher. The Victor’s seat are too soft -- initially it feels good but after riding the bike for more than 20 minutes, the rider’s bottom kind of “sinks in” the saddle and the back starts to hurt. Suspension duties are handled by telescopic front forks and a twin shock absorbers at the back on all three bikes. TVS Victor that offers the best ride quality here though, with its soft setup that helps you ride over potholes and broken roads without getting unsettled.

The Splendor and the Livo are stiffly sprung, with the Hero offering fairing marginally better if you are willing to ride over bumps slowly. Coming to the handling bit, commuters like these aren’t mean to go fast around bends and the focus is more on agility to cut through traffic swiftly. The Livo impresses on this front by allowing quicker directional changes, besides being the lightest motorcycle here at 111kg, the Splendor and Victor are heavier by 4 and 2 kg respectively.

The Splendor and Victor aren’t exactly lacking in this department, but feel slower to respond to rider inputs as compared to the Honda. If you enjoy going fast around corners, it’s the Livo that feels the most stable with its diamond type frame, while the Splendor iSmart 110 comes a close second. And this is where the Victor’s softer suspensions setup holds it back, as it doesn’t feel as confident as the other two. The Livo and Victor get optional front disc brakes and the Livo’s unit offers good bite and feedback, and the Honda is my pick in terms of braking. The Victor’s disc offers good bite but lacks feedback through the lever. The Splendor iSmart 110 doesn’t get a disc brake option, which is disappointing in an age when even automatic scooters get the option, and understandably, it fared poorly in the braking department.

Going by our seat time with the three motorcycles, it’s the TVS Victor that wins this battle. It offers everything a modern commuter buyer demands, only missing out on the style quotient. Its engine feels punchy and refined while being frugal, beside the fact that it is offers the most comfortable ride of the three.

It also gets a host of features, despite being priced aggressively. The Victor is in fact the most affordable bike in this comparison, with its disc brake equipped version retailing at Rs 52,715. The Hero Splendor iSmart 110 is priced higher at Rs 53,530, but we must point out it doesn’t get a disc brake option at all. The Honda Livo is the most expensive motorcycle here, costing Rs 56,175 for the disc brake variant (all prices ex-showroom, Delhi).

Interestingly, only Rs 100 separate the drum variants of the Hero Splendor iSmart 110 and the Honda Livo. So which bike comes second? In our books the Splendor iSmart 110 manages to better the Livo by a small margin as it gets a refined, frugal engine, start-stop technology and better features. That’s besides the fact that despite Honda becoming extremely strong in the commuter space, Hero MotoCorp is a brand trusted by millions of buyers. The Honda Livo might have come last but it is a good option for someone looking for a commuter motorcycle with a dash of premium styling and doesn’t mind paying the extra moolah.