Can the new Hero Maestro Edge dethrone the TVS Jupiter from the top as our pick of being the best 110cc scooter on sale in the Indian two-wheeler market? Read on to get then answer.. 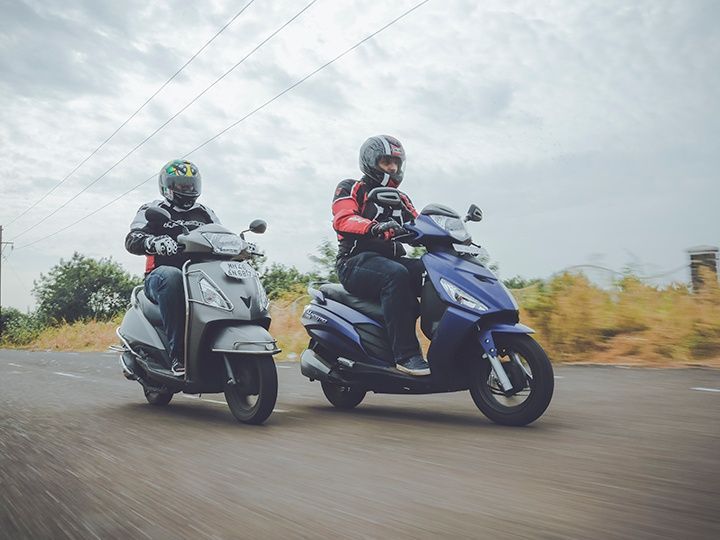 If we told you that scooter sales are growing on a steady rate it wouldn’t really come as a surprise. Look around your streets and parking lots and their numbers continue to grow with every passing day and there’s a good reason for it. Scooters come with the benefit of being versatile especially in the Indian context where motorcycles are mostly restricted to male buyers and scooters are looked upon as uni-sex offerings. Also rapid urbanisation meant there has been a new found demand for scooter which can be used by every member of the family for their daily runabouts. Now coming back to the comparison we have on hand, Hero MotoCorp has been the undisputed king when it comes to making affordable, reliable, frugal and easy to run commuter motorcycles and sold millions of them in our market.

But when it comes to scooters, they have been disappointing to say the least, and Hero knows this fact. To change this perception, they have introduced their first indigenously developed scooter, the Maestro Edge. The task on its hand isn’t an easy one and to make things even more difficult for it, we compare it with our choice as the best 110cc scooter on sale in India - the TVS Jupiter.

Without beating around the bush, we would right away say that the Hero Maestro Edge is definitely the better looking scooter among the duo. The new scooter isn’t much visually different from its sibling but Hero designers have cleverly added cuts and creases to make the Maestro Edge more visually appealing. Other design details of the scooter include the chunky alloy wheel, LED tail lamp that makes the rear look distinctive and the swoopy exhaust muffler. Now the TVS Jupiter isn’t a bad looking scooter but the styling is a bit too conservative for our likening and it is time that TVS gives the Jupiter a cosmetic update.

Hero has loaded the Maestro Edge with features like integrated braking system, pass light switch, external fuel filler cap, semi-digital console, anti-theft system and LED tail lamp. The TVS Jupiter also has similar list of features as compared to the Maestro Edge but it has an analogue instrument console though it has the advantage of econometer and reserve fuel indicator which is a very useful feature.

The Jupiter’s kick lever has been directed towards the rider which means one can kick-start the scooter from the saddle itself. Both the scooters get mobile charging port while the Maestro Edge also gets equipped with boot light which is a well thought addition. Under seat storage is also similar and both the scooters could only fit in a half face helmet. Overall both the scooters are filled to the brim with features and are sort of a benchmark for other scooters in the 110cc segment with respect to features.

The powerplant on the Maestro Edge is special for Hero as it is its first indigenously developed scooter motor, unlike the Honda sourced unit as seen on the Maestro. The basic principles for both the engines are same, which is an air-cooled, 110cc displacement single-cylinder mill. The Hero Maestro Edge’s heart produces 8.4PS of power and 8.3Nm of peak torque while the Jupiter’s motor produces 8.1PS of peak power and 8Nm of max torque. In real world conditions, it’s the TVS Jupiter that leads the charge with terms of performance as it has brisk acceleration and the engine feels more tractable which is crucial while riding in city traffic as speeds keep on changing on a consistent basis. The Maestro Edge feels a bit lazy in gathering momentum but has a strong mid-range which enables it to hold speeds around 60-70kmph effortlessly.

The fact that Hero engineers have tuned it for better fuel efficiency can be gauged right way. Both the scooters aren’t very refined as vibes can be felt through footboard and handlebar at speeds above 40kmph but the Jupiter felt marginally better with respect to overall refinement. The Jupiter feels the more peppier and eager with respect to performance and is our choice among the two for its zippy nature. Fuel efficiency is among the major criterion for buyers in the scooter market and there was hardly any difference between the duo as the Jupiter and the Maestro Edge returned us an overall mileage of between 50-53kmpl.

Talking about ride quality, both the scooters employ same suspension hardware - telescopic front fork and monoshock unit at the back. The TVS Jupiter has the better ride quality as it swallowed bumps and undulations effortlessly while the Maestro Edge faired decently well but it just couldn’t match the plush ride quality that its rival had on offer. High speed stability of both the scooters was impressive and this can be credited to the larger 12-inch diameter wheels (10-inch dia rear wheel on Maestro) and we hope other manufactures too start offering them. Handling wise also it’s the TVS Jupiter that trumps the Hero Maestro as the TVS offering feels extremely agile and flickable which is hugely beneficial on the traffic clogged streets of cities.

The Maestro Edge holds its line well on sweeping bends but it is no match to the lively handling dynamics of the Jupiter and the additional bulk of 3kg doesn’t help its case either. With respect to braking, both the scooters employ drum brake at both the ends for anchorage. The Hero Maestro Edge has better braking performance as it offers better feel through the lever while integrated braking system avoids the rear wheel from locking up thereby increasing the confidence of the rider.

Indian buyers are extremely price conscious so before delivering the verdict, let us take a look at the pricing of the scooter duo. The TVS Jupiter carries a sticker price of Rs 47,989 while the alloy-wheel version of the Hero Maestro Edge that we compared retails for Rs 50,700 which clearly showcases the fact that the Jupiter is the more value for money proposition. The Maestro Edge is a good attempt from Hero, its attractive looking, has loads of features, good mileage and of course the benefit of Hero’s extensive dealer and after sales network. But as a scooter and product, the TVS Jupiter still maintains its crown as our choice as the best 110cc scooter on sale currently. It offers everything that the Maestro has on tap but in a better manner and it still continues to be the benchmark in the segment although the Maestro Edge did give it a few jitters.