Having ridden it daily to work for over four months now, I haven’t had any major complaints with TVS’ best-selling scooter. 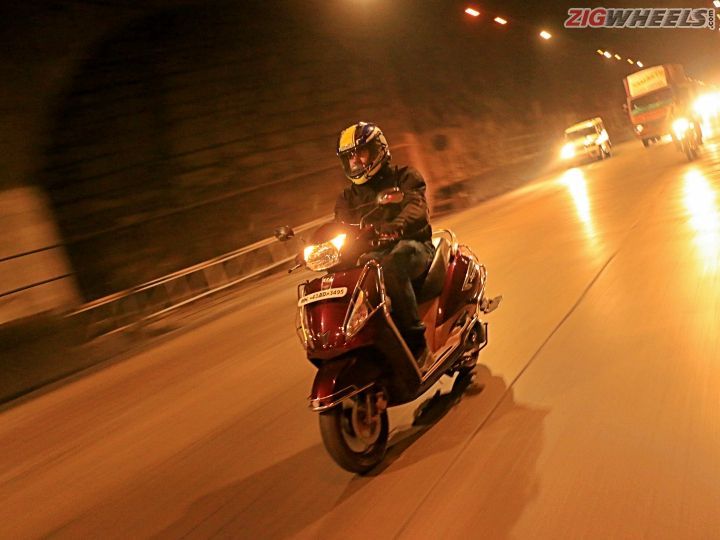 After changing many hands and being ridden down to Pune from Mumbai, the Jupiter arrived right when the monsoons did as well. Scooters might not be as exciting as, say, entry-level performance bikes, but excitement wasn’t exactly what I was looking for on my daily commutes. On my 15km-long daily rides to and from work, coping with the heavy traffic and a light wallet were my priorities when the Jupiter’s keys were handed over to me. After being spoilt by the Victor’s fuel efficiency, a scooter seemed like a sensible transition. Not only did it bring with it added practicality, but the rave reviews made it seem like the scooter to have. And it hasn’t disappointed.

Having ridden it daily to work for over four months now, I haven’t had any major complaints with TVS’ best-selling scooter. Given that my commutes are mostly over pucca roads, I’ve grown fond of the suspension that’s set up on the softer side. The Jupiter just glides over bumps and potholes, big or small. There’s none of the crashing sound that you’d expect from its rivals from Honda, thanks to the telescopic forks at the front. The gas-charged monoshock has also treated my pillions to a supple ride. Now, this isn’t ideal when you want to have a go at those sweeping corners or twisties, but I have rarely wandered out of city limits on it, so that’s not been a concern. Another grouse, as highlighted by Arun, is the seat that is too soft for you to go on longer jaunts without ending up with a backache.

Now, monsoons are infamous for taking a toll on drum brakes but the Jupiter has aced on that front as well, with a disc brake at the front. The front disc and rear drum setup has helped me shed speeds of as much as 60-70kmph without any drama. This came as a massive boon, especially in the rains.

Another highlight, and the most important one thanks to the state of my wallet, has been the Jupiter’s mileage. TVS’ ‘Eco’ and ‘Power’ mode indicators on the instrument console might be written off by some as gimmicks, but they actually help you take control of the scooter’s efficiency. Ride it in a sedate fashion in Eco mode and you can expect it to return an efficiency in the ballpark of 57kmpl. However, keeping it in Eco mode means you can’t go for those gaps, forget about overtaking that car going at 50kmph, and you’ll end up being the slowest one on stretches of highways. But, ride it in Power mode and you can do all of that and keep up with the highway traffic as well. The trade-off here, though, is that the efficiency drops to around 48kmpl. That said, take these figures with a pinch of salt though as these were recorded a few weeks before the Jupiter was due for service - its engine got noisier, the disc brake needed to be bled, and the beige floorboard needed some serious cleaning.

That’s all behind it now and the Jupiter is back with us. I can’t wait to take it out of the city and on to the hills around Pune to find out how much of a bother the seat and the soft suspension actually are.