Has TVS successfully added the right touches to make the Jupiter feel classic without hindering its already perfect recipe? 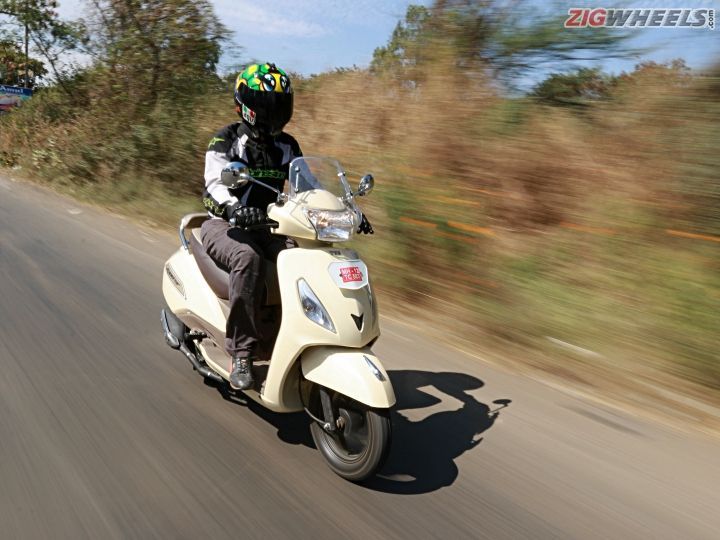 With the Jupiter, TVS had struck the perfect balance between affordability and aspiration when it comes to 110cc scooters. Not only did it offer a supple ride and features that were once first in the segment, it was also priced competitively. It struck the right chord with the audiences as well and the sales numbers reaffirmed the same. While the first million was recorded in 30 months, it took TVS only 18 months to register the second.In September 2017, the company announced that the Jupiter has achieved the 2 million milestone, breaking into the top five space on the two-wheeler sales chart in just three years since going on sale. In fact, the Jupiter is now the second best-selling scooter in India after, yes you guessed it right, the Honda Activa.

With the Classic Edition, TVS is at it again, cashing in on the popularity of its best-selling scooter that is. And while its last stint at widening its appeal with the MillionR edition went down well with us, does the new one end up in our good books? Or is it just another special edition cliche that opts for form over function? More importantly, is it too little in function and too much in form to be a deal-breaker?

The ‘Sunlit Ivory’ shade catches your eye first. While it is striking, it might not suit everyone’s taste. The rearview mirrors are now circular in shape and sport a lot of chrome. Visibility hasn’t taken a hit despite the change in shape and the mirrors continue to offer a good enough view without your shoulders or elbows coming in the way. There is some more chrome on the newly added backrest for the pillion.

Add to that the new windshield, which all comes together to give the Jupiter a retro (read Vespa-like) look to a certain extent. You also get a few stickers sprinkled across the body of the scooter. All these changes are only aesthetic in nature.

It’s not just about form everywhere - a couple of changes also address two crucial pain points that might have landed as feedback in TVS’ mailbox. The floorboard, for instance, gets a more practical darker shade with the ‘Sunlit Ivory’ body paint, instead of the lighter colour seen on the MillionR edition. Having lived with that one, I know how easily it could go from retro beige to ugly and mucky. However, if you opt for the ‘matte chocolate brown’ paint job you’ll have to settle for the lighter-coloured floorboard.

The other, more important, change, or rather improvement, is the new dual-tone seat. If there was one chink in the Jupiter’s packaging, it had to be the seat. The earlier unit felt a bit too soft over longer commutes and that has been addressed well here. While the bolstering does eat into the seating surface, it isn’t really noticeable.

The biggest change the Jupiter has received since the MillionR Edition is the new BSIV-compliant engine, and with it, the now mandatory AHO feature. The 109.7cc single-cylinder air-cooled engine still dishes out the same 8PS of power. However, torque is slightly up by 0.4Nm, now standing at 8.4Nm. In its Classic guise, the Jupiter managed the 0-60kmph sprint in 9.16 seconds on our tests. Speaking of our tests, it returned 60.44kmpl in the city, while on the highway it managed 66.7kmpl.

Fuel efficiency aside, other characters of the engine like the level of refinement and power delivery are still trademark Jupiter, which is a compliment frankly. The linear power delivery makes riding it a breeze in the city. And where it aces its rival, the Honda Activa, is the transmission department. The transmission lag here is barely noticeable and it certainly helps the Jupiter be quicker off the line when compared to the Hondas with their age-old variomatic transmissions.

Now since this is just a special edition, we didn’t expect changes to go much beyond the surface. And that’s why we were in for a surprise. The stock Jupiter’s suspension was on the softer side already. It felt at home on Indian roads and went like a breeze over potholes. It even tackled larger speed breakers with utmost composure. To be honest, the suspension setup shouldn’t have been on TVS’ “to tweak” list. But our test scooter came with a suspension setup that was even softer and frankly, it doesn’t feel like much of an improvement.

City speeds in the vicinity of 40kmph are tackled easily. It still continues to be as composed over speed breakers, potholes and broken roads in the city as the stock Jupiter. Even the pillion won’t complain if the scooter is ridden sedately in the city. The stock Jupiter's suspension was a delight and the Classic’s setup also feels the same in the city, given you ride it tamely. However, on our test scooter, the rear tended to hop at speeds north of 50-60kmph over uneven surfaces. Cornering at similar speeds wasn’t a confident affair either. But then again, anyone in the market for the Jupiter doesn’t have carving corners on his priority list and hence, this isn’t disconcerting.

Still aiding city commutes are the 12-inch alloy wheels which feature the same brake setup as the ZX Disc Brake variant - a 220mm disc up front and a 130mm drum unit out back. Speaking of brakes, the disc up front makes shedding speeds a breeze. Like the standard disc brake-equipped variant, the Classic also gives TVS’ Sync Braking System a miss. The combination of a front disc and the rear drum is very efficient though and brings the scooter to a halt from 60kmph in 20.20m without any drama, which is better than its rivals from Honda.

The 90/90 section (both front and back) tyres offer decent grip on dry tarmac; you won’t find them slipping through corners, thus inspiring confidence. Even while hard braking, the tyres retain composure and they almost never step out of line.

At a price of Rs 55,466 (ex-showroom Delhi), the Classic Edition commands a premium of Rs 900 over the Jupiter ZX Disc Brake variant and Rs 5,500 over the base variant. For the premium it asks over the ZX Disc variant, the Classic does seem like a value for money proposition.

Whether you think the changes look good or not, it helps the scooter stand out of the crowd. And apart from all the chrome and beige taking centre stage, it also gets functional bits like a firmer seat and a darker floorboard. The suspension, a cause for concern at high speeds, is not really a bother while commuting through the city.

However, if you don’t dig TVS’ “retro styling” bits and your commutes aren’t long enough, we suggest you go ahead with the ZX Disc variant as it gets all of the features that made it such a big hit. Also, while the MillionR Edition struck the sweet spot with a distinguished style and a wider appeal, we feel that the Classic Edition might appear like it’s trying too hard, and would appeal only to a niche audience. But, with a new colour option launched recently, the Classic Edition could help the Jupiter sprint even quicker to the next million sales milestone. Nonetheless, it is a bold move by TVS, but whether it goes down well with Indian buyers still remains to be seen.