For 2018, TVS has updated the RTR 200 with a lot more than just new colours. We find out how these upgrades have affected its overall performance in the real world. 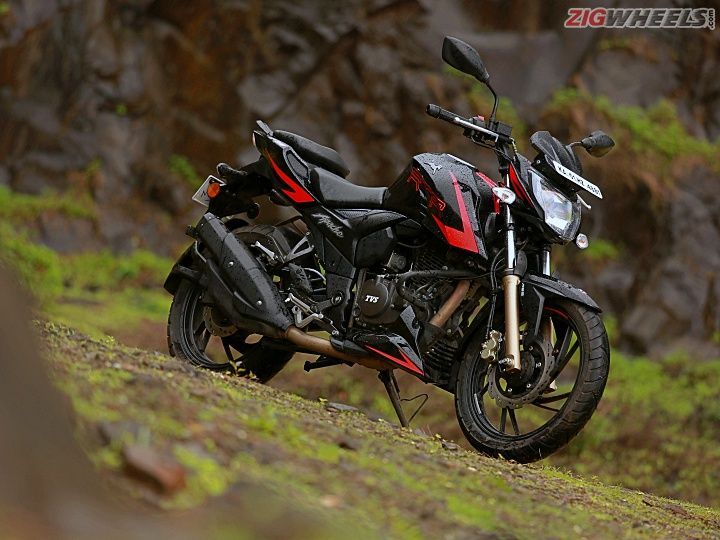 In our comparison between the carb and Fi version of the RTR 200, it was the carb variant that proved to be a lot more performance-focused than the Fi variant. This time around we have the newly launched carb version of the Race 2.0 edition. Wherein the Apache RTR 200 Race Edition 2.0 also gets a slipper clutch and dual-channel ABS, both firsts for this segment. So how much has it affected the rideability of the TVS Apache RTR 200 Race Edition 2.0?

The RTR 200 looks similar to the 2016 model it replaces, with 3 distinctive changes being the new paint schemes, the sharp sketched out stickers and the small windshield over the headlight. Other than these, the styling cues, typical of the RTR family, have been retained.

The headlight with the boomerang-shaped DRL’s looks edgy. However, while the brightness from the lamp is adequate, it could have been better since the visibility drops in the face of glares from oncoming traffic. The all-digital, white-backlit instrument cluster packs in readouts like a lap timer, a top speed recorder and fastest lap recorded, apart from the standard readouts on offer.

The quality of the switchgear is top notch and the switches work well too. Other design highlights include the offset fuel lid and the air ducts on the aggressive looking fuel tank, which are purposeful and help channelize the airflow for better engine cooling.

Overall, the Apache RTR 200, with its attention to detail and build quality, feels like a premium motorcycle. The only dent in this attractive-looking motorcycle is the double barrel exhaust, which doesn’t really gel with the overall design aesthetics of the bike and looks a bit too bulky.

There is no change in the engine department. Therefore, the air-and-oil-cooled motor continues to produce peak power of 20.05PS @ 8500rpm with the peak torque of 18.1Nm kicking in at 7000rpm.

The bike’s strong low and mid-range grunt is also evident in the way it rides in the city: responsive, refined and vibe-free. Although, this feeling changes as you hit triple-digit speeds, as the motor starts feeling stressed post 7000rpm, with mild vibes creeping into the foot pegs.

The Apache RTR 200 4V Race Edition 2.0 now gets a slipper clutch, which aids in downshifting through multiple gears at once without any fear of locking up the rear wheel. Another big advantage of the slipper clutch is that clutch lever action is very light, which means riding in city traffic has now become much easier.

The clip-on bars on the RTR 200 are positioned for a more relaxed and easy reach. The mirrors with the extended stalks also provide ample rear view.

The RTR’s commuter-centric ergonomics are evident from the forward-set footpeg positioning as well. But they are quite high-set as well, and that does need a bit of getting used to. That said, the RTR 200’s ergonomics are fairly comfortable for taller riders as well, with plenty of space to lock your knees on the scooped-out tank recesses. But then, the split seat setup means that there isn’t too much room on the rider’s seat, so those with generous proportions need to beware. Also, the cushioning is a tad too soft for spending long hours on the saddle.

The front telescopic forks and the 5-step preload-adjustable hydraulic monoshock at the rear are tuned on the softer side. Therefore, even if it manages to tackle rough road patches with finesse, it doesn't feel composed enough after going over large bumps and the bike tends to bob a bit before it regains composure.

This is mainly due to a faster rebound. In fact, with a pillion on-board, this effect escalates. Also, owing to the soft setup, many times the pillion is caught off-guard by the sudden jolts while tackling potholes since the rear suspension bottoms out.

Out on the twisties, charging into corners on the RTR requires some getting used to as the light and sharp front end makes it tip into corners even before you intend to. The soft suspension aids in tackling mild undulations while cornering. However, mid-corner, the RTR 200 does feel a bit twitchy, which is owing to the short wheelbase of 1353mm. Corner to corner transition is fluid though, with a bit of correction required on the light front end.

The RTR 200’s tyres also play a key role in cornering. And on this front, TVS is offering their newly developed Remora tyres, which offer plentiful grip on dry roads but don’t offer the best traction while cornering on wet roads. So corner junkies, be careful on wet surfaces.

The 270mm front and 240mm rear disc brakes now come equipped with dual-channel ABS, a first for any bike in this segment. The good bit is that the ABS isn’t very intrusive at the front. The same can’t be said about the rear unit though, as a little more room before the ABS kicks in during hard braking would have been appreciated.

On the whole, the brake feel from the non-ABS RTR 200 hasn’t really changed, meaning that there’s no consistent feedback when you go hard on the levers. And while the bite from the brakes is decent when using them gently, they seem to be lacking power if you need to stop quickly.

They bring the bike to a halt from 60kmph in 21.09 metres, which is about 5 metres more than the braking distance of the non-ABS equipped Bajaj Pulsar NS 200.

How fuel efficient is it?

We put the Apache RTR 200 4V Race Edition 2.0 through our standardised fuel efficiency tests in the city and on the highway as well. It managed to return 46.9kmpl in the city and 41.5kmpl on the highway - not a surprise since even the earlier RTR 200 we tested had exhibited the same pattern of doling out more efficiency in the urban environment. So yet again, the RTR proves itself to be a worthier city bike.

After putting the RTR 200 Race 2.0 edition through some serious testing, it makes a strong case for itself by offering commuter-friendly dynamics, strong low and mid-range performance, a soft and comfortable ride (in most conditions), light clutch feel and higher fuel efficiency in the city.

Add to that, the price of Rs 1.10 lakh (ex-Delhi) for the ABS variant (Rs 13,800 dearer than the non-ABS version), and the Apache RTR 200 4V Race Edition 2.0 comes across as a strong proposition for someone who doesn’t have much of highway riding to do.