We expect great things from the new R15 V3.0. But what direction is the third gen of this Yamaha taking? Racier, friendlier, or both? 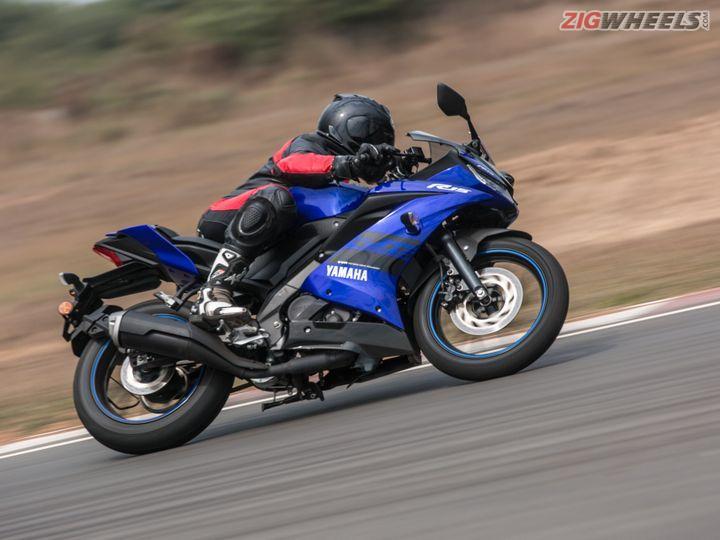 Racetrack-worthy chassis and hi-tech engine packaged into a racy-looking motorcycle that’s dished out at a price just within reach of college goers -- this has been the Yamaha R15’s golden formula. The third generation R15 is now here and it is very familiar in many ways, but it is also promising to move the goalposts forward too in many ways. Which goalposts? And by how much? We listed our expectations and then hopped aboard the R15 V3.0 at the Madras Motor Race Track in Chennai to see if they turn out to be True or False.

Assumption: It is good value.

Why: You don’t need to ride the V3.0 to understand this. Yes, at Rs 1.25 lakh the R15 is pushing the boundaries of “sensible” pricing for a 150cc motorcycle; however, the Rs 7000 premium paid over the V2.0 is money well spent. From a swag standpoint, you get variable valve timing, hi-tech hardware that is rare even on proper litre-class motorcycles.

If you like your bike to wow even at lower speeds you can’t be disappointed with the V3.0. The all-new design genuinely makes it look like one of Yamaha’s big bikes. And the sleek front fairing also packs in a full-LED headlamp! Also, the rider’s instrument cluster is a full-LCD unit. Wow? Plenty.

Now we will bash the R15 V3.0 for one thing, and that is missing ABS. Yamaha should offer it at least as an option.

Assumption 2: Engine will be better for track use.

Why: In terms of the engine the R15 didn’t really make a big jump from V1.0 to V2.0. However, with the V3.0 the story is a bit different. While the liquid cooled, four-valve single-cylinder engine is based on the V2.0’s engine, it has been updated thoroughly. Variable valve timing is used on the intake valves to help the engine breathe better at high rpms as the second lobe kicks in at 7400rpm! Upstream, the valves, throttle body and the air box have been made larger too. A ten-hole fuel injector feeds fuel into the pentroof design combustion chamber, and the compression ratio is 11.6, as opposed to the previous 10.4. The bigger dia piston is still a forged unit to keep weight low. But to help make the engine more efficient and free-revving the crankcase has been modified to reduce pumping losses. No surprise then that the power has jumped 16.3 per cent then?

Let’s not forget that the R15 now also packs a slipper clutch which will help keep the rear wheel from hopping around when downshifting aggressively. Also, Yamaha claims that the engine weight has been kept the same despite all these additions!

From the saddle: And boy could you feel that on the track! Where the pace would start to taper a bit on the V2.0, the V3.0 steams on solidly till it hits its higher 11,500rpm limiter. The additional 1000rpm lets you hold a gear between corners and carry more pace now.

The use of a more aggressive cam helps keep the shove from the engine strong right upto 10000rpm. Also, the final drive has been shortened to multiply the acceleration. We frequently saw a top speed in the range on 134kmph at 11,000rpm while still in 5th gear. While acceleration figures aren’t on hand we expect the R15 to be faster not just in drag races but even in real-world conditions.

The gearbox is an absolute stonker. Gear shifts define slick and precise. Also, the slipper clutch provides the added benefit of light and quick clutch action. Does the slipper clutch work? If it did it was so smooth we didn’t notice it.

Assumption 3: It won’t feel as special as the V1.0 in terms of handling.

Why: The V1.0 has been the preferred R15 for more seasoned riders when it comes to handling. It was light on its feet and felt telepathic while changing lines. The V2.0’s longer wheelbase and bigger tyres traded some of the lightness for confidence. With the V3.0 Yamaha has increased tyre sizes further, although the rear tyre is no longer a radial. However, an optional H-rated Metzeler Sportec M5 is offered as an accessory.

The famed Deltabox frame is carried over, albeit with changes to the overall setup. On the upside, the wheelbase has been reduced significantly from 1345mm to 1325mm. Still, nowhere as tight as the V1.0’s 1290mm wheelbase. In terms of steering geometry, the rake is sharper by half a degree and the trail has decreased by 10mm. The shorter swingarm, by11mm, all combined account for the shorter footprint. Also, the V3.0 is three kilograms heavier, taking the total to 139kg.

From the saddle: On paper, it was a bit of a toss-up, and we chose to keep our expectations in check. As it turns out, we needn’t have! The V3.0 is properly eyebrow-raising and mind-bending. Never have I turned in later for the fast first corner at the MMRT. And, with each lap I found the confidence to turn a bit later still. The reason is that the V3.0 turns so quickly and feels like a smaller motorcycle in the way it sweeps into corners. While it feels a lot more agile it has the confidence to flatter the rider too.

The bikes we rode came with the stock MRF tyre at the front and the optional Metzeler at the rear. The front tyre was a bit noisy under hard braking and the idea of a radial front too makes a lot of sense. The real tipping point was the 282mm Bybre front disc. The larger disc offered strong bite, but the spongy lever and dull feel kept us guessing.

Assumption 4: Engine will be better for city and highway.

Why: With shorter overall gearing and peak torque being made at a higher rpm, the R15 V3.0 could be a better commuter but highway cruising could suffer.

From the saddle: So it is better. Right from idle the V3.0 pulls crisply without grumbling. The revs build smooth and clean. Sitting in 5th at 30kmph is very doable. You get more responsiveness at low rpms. Where we feel we were wrong was on the cruising ability. The new engine, despite the shorter gearing, feels smoother at triple-digit speeds. The vibes start to come in only after 8000rpm and even those aren’t deal breakers.

Assumption 5: Won’t be more comfortable for the rider or pillion.

Why: With the low-set clip-ons and seat height increasing by 15mm to 815mm, better comfort for the rider was not something we were expecting. Even the pillion seat is still mounted high up, so expecting this to be a natural long-distance choice for rider or pillion was out of the question.

From the saddle: Okay, in terms of ergonomics it isn’t a natural long-distance machine. The rider’s seating position is more aggressive, with lower-set bars, a higher seat and foot pegs that have been moved back a bit. So, you will load up your triceps and wrists more.

But the V3.0 is nicer to the pillion. Despite the ground clearance increasing by 10mm to 170mm, the pillion seat is now less stepped and so you don’t feel like you are hovering above the rider. Now, almost anyone can swing a leg over to hop onto the bike, something that only the tallest of companions could do earlier.

Assumption 6: It will feel more special

Why: With the inclusion of features such as the LCD instrument cluster, LED headlamps and the R1-inspired design, the V3.0 should look like a proper modern-day sportbike. Also, Yamaha quality is known to be of the highest order.

From the saddle: No doubt, it is a looker. Smaller details like the gill-like cutouts on the tank and the floating panels for the tail section are delicious. The LED headlamps look sharp, but how well they work in the dark remains to be seen. We weren’t impressed with the FZ25’s LED setup, and hence reserve judgement for later. The all-LCD instrument cluster is easy to read and even allows you to customise the shift light and the welcome message. However, compared to bikes like the TVS RTR 200’s, there is no top speed, acceleration or lap time recording systems on the R15.

Yamaha is offering accessories and bolt-on parts for the R15 V3.0 and you can read about it here. The real disappointment was the quality: The cast alloy bits for the handlebar looked coarse, and the welds on the subframe seen under the instrument cluster, the fit of the plastic panels under the seat and the cap for the pillion seat locking bolt looked far from the high standards we have come to expect from Yamaha.

So, awesome or not?

If you were expecting the Yamaha R15 V3.0 to be an easier bike to live with, our first impressions suggest that it is a bit of a mixed bag. The gaps in quality will be an annoyance, and the lack of ABS even as an option is saddening.

Look deeper, though, and the signs are heartening. The smoother engine with crisp responses at low speeds, claimed the increase in fuel efficiency, nicer pillion seat and greater ground clearance make it a more practical motorcycle now. However, the more aggressive seating position is a price the rider will have to pay. For this, the V3.0 will reward him with ever higher levels of performance, dynamic prowess and head-turning styling. Yamaha’s R15 V3.0 is a genuine supersport you could afford and learn to live with.