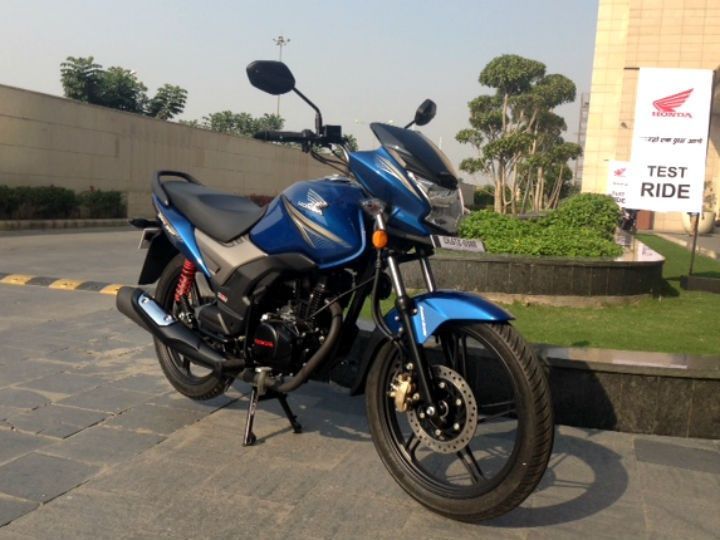 So, what is the Honda CB Shine SP? And is it as good as the management at HMSI seem to think? We take a close look at the new Honda CB Shine SP and a brief ride as well, to see if it’s got what it takes to rake in the sales registers for HMSI.

The Honda CB Shine SP has been positioned just above the existing CB Shine as a premium product. Overall, the CB Shine SP retains a similar design silhouette of the CB Shine, with of course some new ‘premium’ bits, which lend some sportiness and freshness to the bike.

So, the CB Shine SP has new body graphics, 3D Honda emblem on the fuel tank, redesigned and dual tone side panels, blacked out engine, new alloy wheels, new headlamp unit, new part digital, part analog instrument panel, and a new chrome finish exhaust cover. In all, the CB Shine SP can, at best be called a facelift of the existing CB Shine, though it’s certainly a handsome looking bike from all angles.

The Honda CB Shine SP is powered by the same 125cc, single-cylinder, air-cooled engine that powers the current CB Shine. The engine is a refined unit with decent performance, making 10.7PS of power and 10.3Nm of peak torque – par for the course for 125cc motorcycles. The only difference in the CB Shine SP is that it now gets a five-speed gearbox compared to the earlier four-speed unit on the CB Shine.

The CB Shine has always been an impressive motorcycle but where it was a bit of a letdown was in high speeds and in higher revs of the engine, where the refinement loses out and the engine becomes a tad vibey.  We had a brief ride around the CB Shine SP’s launch venue and from initial impressions, it is the refinement which is noteworthy.  Power delivery is linear and the first thing we noticed is the silky smooth performance of the engine.

The five-speed gearbox slots in precisely and though it was a very brief ride, the CB Shine SP cruised with its refinement intact in higher revs in the fifth gear. Now, this could hardly be called a test ride, so we’ll have to do a proper review to see how the bike performs in the real world, but overall, there’s not much to complain in terms of performance. Honda claims fuel economy figures of around 65kmpl, so the CB Shine SP is expected to be quite efficient as well.

Ride quality is comfortable and in our brief ride, handling was commendable too. The CB Shine SP takes to corners willingly and without instilling any surprises or sense of uneasiness for the rider. Overall, it’s a decent handling bike with comfortable ride quality. The Combi-Brake System works really well and braking is quite good, shaving off speeds quite effectively under hard braking.

As mentioned earlier, the new Honda CB Shine SP at best, could be called a facelift of the Honda CB Shine. Sure, it has a added features – the most significant being the new five-speed gearbox, and a few cosmetic upgrades.

It’s a well rounded product and with spruced up styling and features, it will certainly appeal to young motorcycle buyers. From our brief ride on the new Honda CB Shine SP, it wasn’t enough to really judge its performance, nor would it be fair to pass judgement based on a few minutes’ ride.

First impressions however, are positive, and that fifth gear does seem to make the CB Shine SP feel effortless at high speeds. What also impressed us are the brakes, thanks to the Combi-Brake System. So, well rounded product, decent performance and backed by Honda brand equity, the new CB Shine SP has a lot going for it. We, of course, will be doing a comprehensive review soon, so keep watching this space for an updated and detailed review. For now, we have little to complain about the Honda CB Shine SP.