We have finally driven Honda's new compact SUV and are pleased that it gets seven seats and a brand new interior. Read on to know more! 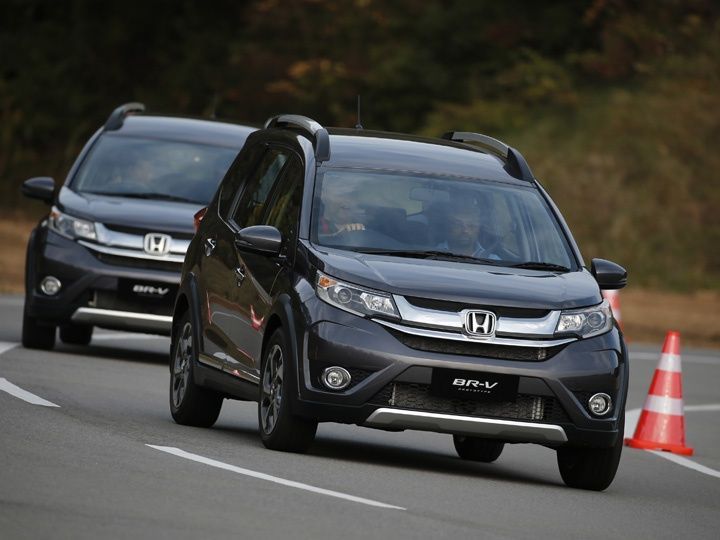 The SUV market in India is going crazy. From large bulky SUVs that were the flavor of the day, the country is slowly and surely moving towards the compact SUV that offers more features and an easier driving experience than ever before. If the success of the Hyundai Creta is anything to go by, the luxury compact SUV segment certainly has a ton of potential and India and that is exactly where Honda intends to slot in its brand new BR-V.

So lets start with the exterior. Even though the resemblance to other Honda products is quite obvious, the BR-V gets along a fresh design language to the Honda range. The Honda City headlamps and grille design have been moved onwards to the BR-V too but get a slightly chunkier feel and look to them. What we like most are the design elements in the bumpers that merge into the wheel arches giving the BR-V a nice planted and frankly performance oriented look. What we are most thankful on the design front though is how the BR-V actually does look like an SUV and not just a pumped up version of the Mobilio even though there are very similar styling elements around the side profile.

Move towards the rear of the car and you are greeted by a unique tail lamp design that runs right across the tailgate. In fact, if you look closely, you will see a lot of inspiration from the likes of the Maserati GranTourismo in the way the tail lamps are designed. There is of course quite a lot of chrome garnish sprinkled around the car with a large piece dominating the tailgate and across the bottom of the doors, features which we think will be appreciated by Indian car buyers. The BR-V will come only with a set of 16-inch wheels which come finished in a machined finish like we have seen on Hyundai cars recently.

Although the BR-V is based on the same platform that the Brio, Amaze and the Mobilio are there is a big change in the interiors and thankfully so. Gone are the drab and much complained about interiors that you get in the Mobilio, replaced buy a design that is closer to the likes of the City and the Jazz in many ways. Although the cars we drove are not the final versions when it comes to interior specification and design, he overall look and feel will pretty much be the same when the car makes its way to India.

You get a large centrally mounted touchscreen infotainment setup (or a normal screen depending on the variant) and smart conventional AC controls as compared to the touchscreen ones you get on the City. We like how the slim AC vents are flanked by an aluminum-esque garnish strip and how the central console is finished in gloss black. To be brief, we think the BR-V looks pretty current when compared to all the other cars and SUVs that are in the market today. The speedometer console too is pretty straightforward and the figures are clear and easy to read. The chunky steering wheel adds to the interior appeal but might be different for the version that makes its way to India.

What will really differentiate the BR-V is the fact that it is a seven seater. But is there really space in the third row? Well, for the average Indian person who is just under 6 feet tall, we are happy to report that there is quite a bit of headroom and legroom available. And of course, there is sufficient room in the middle row too both in terms shoulder space and leg room for three adults. The seats could do with just a slightly more bolstered feel though as they appear to be just a little light on overall support. Coming to the boot, although one can expect enough space with the third row folded down, there is also enough space for a weekend’s worth of bags if you third row is in play.

The Honda BR0V that we drove came with the 1.5-litre iVTEC engine that we have become so used to mated to a CVT gearbox. Of course, in India we will also get the same petrol engine with a 5-speed manual gearbox and the 1.5-litre iDTEC engine with a 6-speed manual gearbox. Sadly though, there will not be an automatic version with the diesel engine just yet. So how does it drive? Well, just like the City, the petrol engine certainly feels rev happy and responsive. That said, considering the fact that we barely drove the car for a few minutes, stay tuned for our full review in a few months to know what the BR-V is really like on Indian roads.

What we did manage to ascertain from the few minutes of driving was that Honda has probably tuned the suspension in the BR-V more towards the comfort side and not towards the handling side, which does make the car a little softer and more comfortable. Do not expect the BR-V to handle like a sportscar (or the way the City and Jazz handles) due to its relatively top heavy setup and softer suspension, but it isn’t exactly a soggy sponge either. We do think the BR-V will get the balance just right when it makes its way to India sometime mid next year. Steering feel though is great and does feel a lot better than the likes of the Hyundai Creta.

All in all, the Honda BR-V is certainly a product to look forward to for several reasons. Firstly, we do think the BR-V will slightly undercut the Creta which could make it a great alternative to the immensely popular Hyundai. Secondly, when it does make its way to India, the BR-V will get a much much better looking interior than the one you see here mainly due to the fact that India will get a beige finished dashboard and seats and not the black one that is meant for the Indonesian market. And finally, an affordable Honda SUV has been on the wishlist of many a carbuyer in India and a diesel engine combined with good looks could give the Honda BR-V the edge it needs to battle in a segment that is already hot! Stay tuned to ZigWheels.com for more updates and a full fleged roadtest and review of the Honda BR-V.