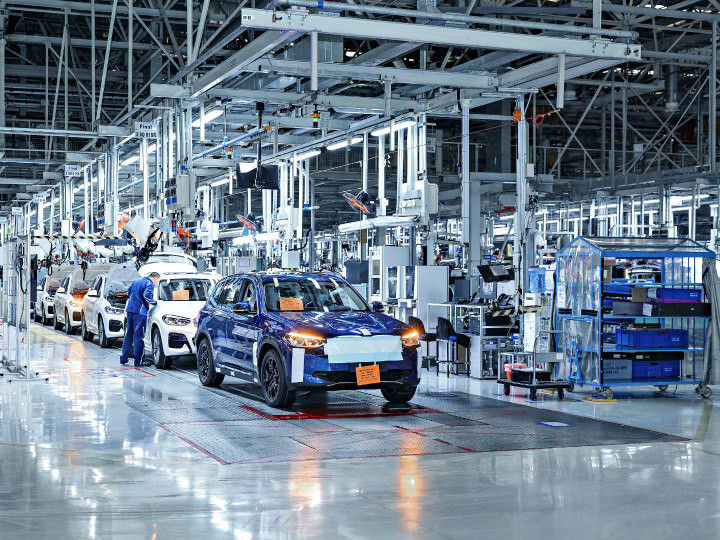 With governments around the world slowly easing up lockdown restrictions imposed due to the coronavirus pandemic, industries are beginning to restart operations. Among them is BMW that has now revealed the production timeline of the iX3, the X3-based electric SUV. The iX3 will be globally revealed by the end of 2020 and will be produced in Shenyang, China.

We already know what the iX3 will look like courtesy of leaked images. It looks largely similar to the regular X3 aside from a few alterations including a new bumper, a redesigned grille, aerodynamic alloy wheels, and blue inserts that denote the SUV is an all-electric model. With the upcoming iX3, the X3 will become the Bavarian brand’s first model available with both conventional petrol and diesel engines, a plug-in hybrid system, and a pure electric powertrain.

The main highlight of the iX3 is its all-electric powertrain which will soon make its way into future BMW electric cars.. A single electric motor will drive the rear wheels, putting out 286PS of power and 400Nm of torque (preliminary data). In comparison to the India-spec X3 20d which comes with a 190PS/400Nm 2.0-litre diesel engine, the iX3 has similar torque figures. But the iX3 is 96PS more powerful than its diesel counterpart. It will also be the first car to feature BMW’s latest eDrive technology, which will be used in the upcoming 2021 i4 and iNEXT EVs.

This electric motor will be juiced up by a 74kWh battery pack with a WLTP-claimed range of 440km on a single charge (preliminary data).

The carmaker has already rolled out its 200th pre-production model from its China production facility and has also been rigorously testing the iX3. The series production of the iX3 will begin in the coming month and it will be launched in markets like Europe and China by the end of 2020. There’s no word yet on whether the iX3 will reach Indian shores, but if it does, it will likely be by 2022 at the latest. Expect a hefty premium over the standard X3 that currently retails from Rs 60.50 lakh to Rs 60.90 lakh (ex-showroom). The BMW iX3 locks horns with the Audi e-tron, Mercedes-Benz EQC, and the Jaguar i-PACE.