The X3 becomes the first BMW model to be offered with conventional petrol and diesel engines, a plug-in hybrid system, and a pure electric powertrain 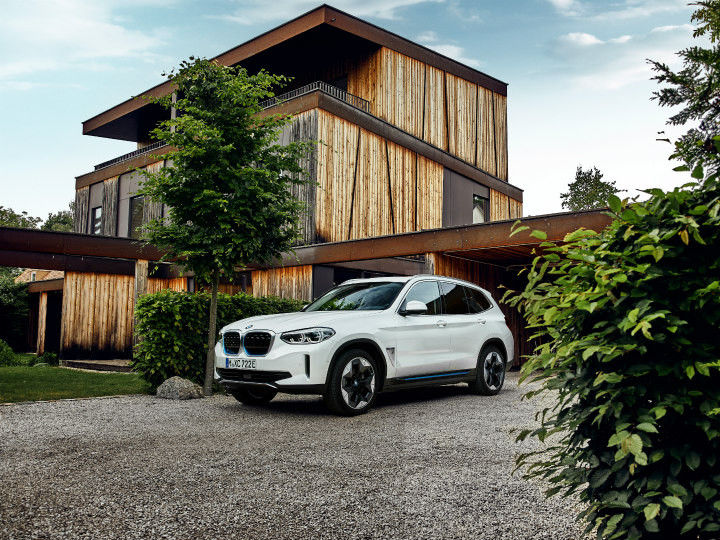 BMW has finally taken the wraps off the second EV in its lineup, the iX3 SUV. Based on the standard X3 SUV, it will be produced in Shenyang, China, and will also be exported from there. This makes the X3 the first model from the Bavarian brand to be offered with petrol and diesel engines, a plug-in hybrid system as well as a pure electric powertrain option. While it is similar to the X3, there are quite a few distinguishing bits too.

The main differentiating factor is its all-electric powertrain. Debuting BMW’s latest eDrive technology, its single electric motor distributes power to the rear wheels, delivering 286PS of power and 400Nm of torque. Comparing this to the India-spec X3 20d’s 2.0-litre diesel engine, the iX3 has similar torque figures but extra 96PS. It goes from 0-100kmph in 6.8 seconds and has an electronically limited top speed of 180kmph to aid efficiency. This technology will be used in the upcoming  2021 i4 and iNEXT EVs.

A 80kWh battery pack gives juice to the electric motor and boasts a WLTP-claimed range of 460km on a single charge. Talking about charge, the BMW iX3 supports fast-charging capabilities of up to 150kW which gives the iX3 a 0 to 80 per cent charge in just 34 minutes. A 10-minute charge is equivalent to around 100km (WTLP).

While the iX3 looks similar to the standard X3 on the outside, it does have differentiating bits to give it a separate identity. These include a new bumper, a nearly closed-off grille, 20-inch aerodynamic alloy wheels, and blue inserts to denote its electric nature. Feature highlights on the iX3 include three-zone automatic climate control with preâ€‘heating and pre-conditioning, panoramic glass sunroof, ambient lighting, automatic tailgate, and a Harman Kardon surround sound system.  It also gets the BMW Live Cockpit Professional, head-up display as well as smartphone integration with Apple CarPlay and Android Auto connectivity.

The electrified X3 will launch later this year in China. There is no word on whether the iX3 will make it to Indian shores, but with the likes of the Mercedes EQC and the Audi e-tron on their way, there could be a possibility. Expect a hefty premium over the standard X3 that currently retails from Rs 60.50 lakh to Rs 60.90 lakh (ex-showroom).