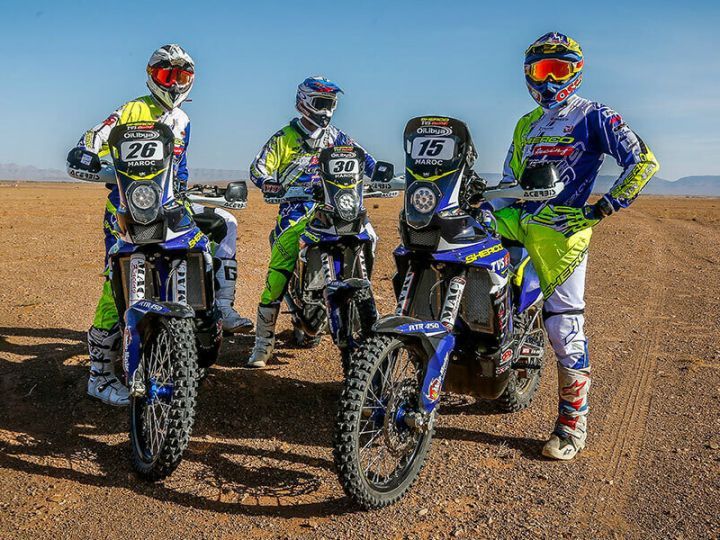 Sherco-TVS Racing has announced its riders for the upcoming Merzouga Rally which is set to start on March 31. The five-day rally will see Indian riders Aravind KP and Abdul Wahid Tanveer and French rider Michael Metge represent TVS. These riders had participated in last year’s Dakar rally.

Of this lot, Michael Metge is the most experienced rider with multiple Dakar outings under his belt. Aravind has the edge over Abdul in terms of international rallying exposure, having participated in three Dakar rallies and being the only Indian to have completed the gruelling rally last year. Nurtured in the hallowed TVS Racing stables, Tanveer has been the Indian manufacturer’s star rider for their national events. He has participated in a couple of rallies abroad last year. He managed to pick up a class win the 2018 PanAfrica rally and placed second in the Enduro category of the 2018 Rally of Morocco.

The Merzouga rally is a five-day rally raid that starts from March 31 and will see riders navigate through sand dunes of Merzouga. It is a tough rally and sets the tone for the Dakar rally as it throws up quite a challenge in the form of high desert temperatures, towering sand dunes and difficult-to-navigate sections.

Press Release:
Bangalore, March 27, 2019: Sherco TVS Rally Factory Team today announced a 3-rider squad for Merzouga Rally 2019, scheduled to take place from March 31st to April 5th, 2019 in Erfoud, Morocco. The squad for this year’s Rally includes Michael Metge from France, Aravind KP and Abdul Wahid Tanveer from India. Michael and Aravind will be racing in the 450cc category, while Tanveer will compete in the Enduro category. This will be the 3rd Merzouga Rally for Sherco TVS Rally Factory Team and the Team will look to begin its Dakar 2020 campaign on a positive note.

B Selvaraj, Team Manager, TVS Racing, said, “The Sherco TVS Rally Factory Team had a good racing season last year and our Indian riders proved their mettle with some outstanding performances in the International Rally circuit. We are all set to step-in to a new race season and hope to deliver some strong performances in the coming year. Merzouga Rally sets the stage for the future races as it offers an ideal platform to evaluate the physical and technical strengths of the team. The 3-member team will look to dominate the Rally and ensure strong results.”

The Dakar veteran Michael Metge will lead the Sherco TVS Rally Factory Team in this event. He comes from a family rich in Rally experience and has multiple achievements on his name. Aravind KP is the only Indian to finish Dakar Rally 2019 and has 17 national championships in his name. Tanveer was the winner of the Enduro category in the PanAfrica Rally 2018 and finished at a commendable 2nd position in the Enduro category of Rally of Morocco 2018. He is also a winner of the Dakar series India Baja 2018 and completed the Merzouga Rally 2017 in Morocco.

The Merzouga Rally is a grueling 5-day Rally Raid that takes place annually in Morocco, among the dunes of Merzouga. Participants at the event will have to deal with soaring temperatures of the Moroccan desert, challenging sand sections and tricky navigational sections.

About TVS Racing
Since the past 36 years, TVS Racing has been actively participating on and off-road racing events such as road racing, Super-cross and Motocross, Dirt Tracks, Rally etc. TVS Racing is the only factory team in India to have any woman rider as a part of their team. In early 2015, TVS Racing became the first Indian factory team to take part in the Dakar Rally, which is the longest and toughest Rally in the world. TVS Racing won 14 championships across all forms of two-wheeler motorsport events Supercross, Rallies and Road racing last year.