Indian Achievements At The Dakar Rally - A Historic Perspective

If you haven’t been following Indian motorsports, the Dakar Rally specifically, here’s how the Indian lads have performed until now to put us on the map 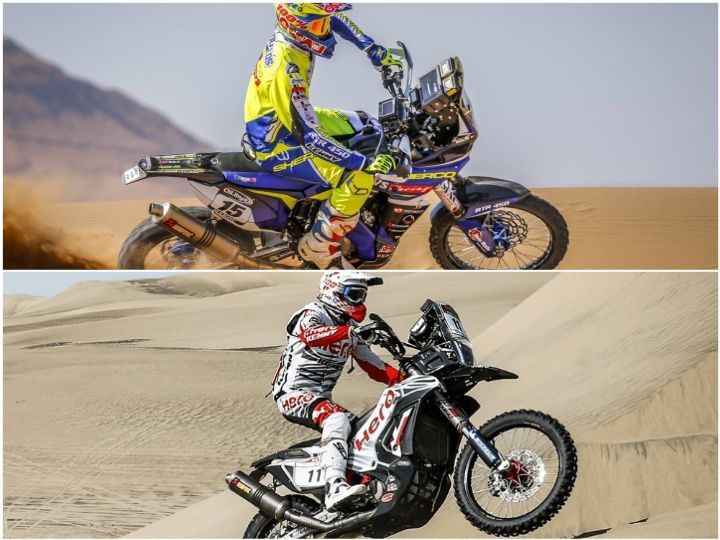 The 41st edition of one of the most gruelling motorsport events in the world is about to commence in a matter of just three days. And this time around, participants will traverse through 10 stages, just shy of the 5,000km mark, in the ever-changing terrains of Peru. As exciting as that sounds, it’s been a hard and tiring journey to get Indian motorsports to this stage. So, we turn back time to give you a lowdown on what our boys and the companies supporting them have achieved over the course of four years.

There’s a lot to be learnt about the motocross rider that practically put India on the map. We’re talking about none other than the Banglore lad, CS Santosh. He was the first ever Indian rider to participate and finish Dakar in the year 2015 while riding as a privateer astride a KTM 450 Rally bike. Despite his very first attempt at taming Dakar 2015, a course that consumed most participants, he managed to finish in 36th spot. A rather impressive feat for a rookie rider!

At the same time that CS Santosh ran with KTM, TVS tied up with Sherco Racing, a French and Spanish bike manufacturer that specialises in off-road motorbikes. The two Frenchmen, Alain Duclos and Fabien Planet, who represented Sherco TVS managed to finish 25th and 29th, respectively.

The year seemed to start on a positive note as Suzuki Europe decided to back CS Santosh for the 2016 Dakar. What started off fairly well, with Santosh ending Stage 2 at 95th position, ended in disaster in the following stages as the Suzuki 450 Rally bike he was riding developed technical issues. To be more specific, the bikes navigation tower went dud, rendering him handicapped. To make things worse, the bikes electricals went haywire during the course of the journey in addition to the tail section breaking off. Since CS was already on his fresh bike post Stage 3 (as the rules state) he was left with no other option but to retire from the race.

Sherco TVS rider Florent Vayssade wrapped up the last stage by finishing 27th while Alain Duclos bagged 23rd spot. The former ended the stage 8h17m18s behind the leader Toby Price (KTM) while the latter took 12h37m07s to finish the 180km-long Villa Carlos Paz - Rosario stage. Although Sherco TVS is fairly new to the Dakar scene, the results speak for itself and make the Chennai based two-wheeler manufacturer a force to reckon with.

2017 was the year that the first Indian manufacturer and rider came together as a team to take on the unforgiving Dakar Rally. Hero MotoCorp partnered with Speedbrain GmbH, a German off-road racing specialist responsible for developing the BMW G 450 and the Husqvarna TE 449 RR. Post the tie-up, the Hero MotoSports team was born along with the Hero 450RR, which is essentially a refreshed version of the Speedbrian 450 Rally. With a brilliant bike at Hero’s disposal, the company handed the baton to three ace rides - Oriol Mena Valdearcos, Joaquim Rodrigues (JRod) and CS Santosh.

It's no surprise then that all three riders, along with their respective bikes, made it to the finish line in one piece. From the trio, JRod finished the race with a commendable 10th place finish. CS Santosh finished in 47th spot and became the only Indian rider that year to finish the Dakar Rally, an achievement by itself.

It was a similar story at TVS’ camp as Joan Pedrero and Adrien Metge finished the 2017 Dakar Rally 13th and 22nd, respectively. Joan Pedrero finished the final stage in an impressive 33 minutes and 57 seconds while his teammate Metge completed the stage in 35 minutes. Aravind KP from TVS Racing was the first Indian rider to sign with the team and made his debut at the 2017 Dakar. Unfortunately, he was forced to forfeit the rally due to injuries sustained during Stage 3 (hyperextended shoulder wrist injuries).

Emotions ran high at the Hero MotoSports camp as the two riders, Oriol Mena and CS Santosh, crossed the finish line. After battling it out through 14 stages, Mena clinched a respectable seventh position in what happened to be his debut year. On the other hand, CS Santosh bagged 34th spot, his best result to date and also became the only Indian rider to finish Dakar for the third time. In an unfortunate turn of events, JRod’s race ended abruptly when he crashed halfway through the Limo-Pisco Stage 1.

On the contrary, Sherco TVS’ Juan Pedrero ran just shy of the top 10 positions and bagged 11th for himself. Aravind KP, now in his second competitive year, met with a nasty crash where he broke his ankle. He has been recovering quite quickly and should be up and about for the upcoming 2019 Dakar Rally.

With the increasing interest and participation from Indian manufacturers and riders alike, we’re sure to see at least one of them take the crown in the near future. For now though, stiff competition is what we can expect from the two Indian riders - CS Santosh and Aravind KP - who ride for Hero MotoSports and Sherco TVS, respectively.