Unveiled at Auto Expo 2020, the Hector Plus could go sale between August-October to take on the Mahindra XUV500 and Tata Gravitas 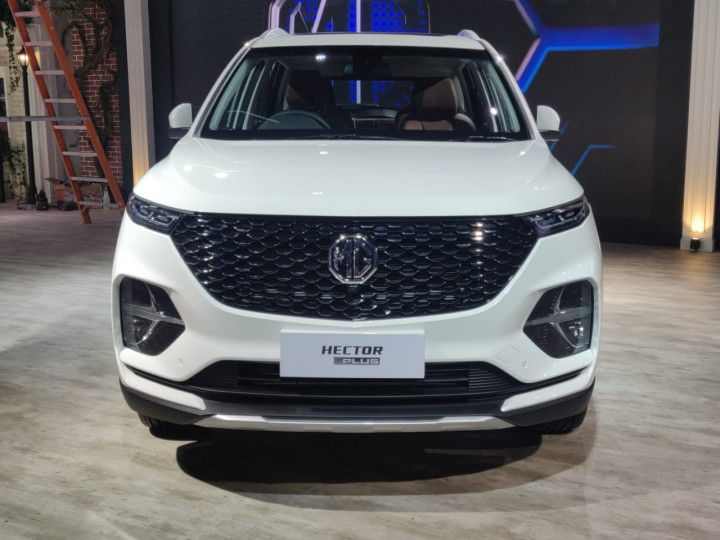 MG Motor India unveiled the Hector Plus 6-seater at Auto Expo 2020. Thanks to the cosmetic changes, the Hector Plus is a better looking SUV in comparison to the existing 5-seater SUV. From what appears now, MG will be upping its game by launching the 6- and 7-seater version of the Hector in August and October respectively.

In terms of dimensions, the Hector Plus is as tall (1760mm) and wide (1835mm) as the standard Hector and even shares the same 2750mm wheelbase as well. However, it is around 40mm longer at 4695mm. The most obvious change lies in the second and third row. The 6-seater version features captain seats for the second row and a rear bench for the third row. Meanwhile, the 7-seater version, which will be revealed closer to launch, will get the same bench seat as the standard Hector in the second row.

Cosmetically, the Hector Plus gets a redesigned front and rear end. Changes include a new grille, sleeker headlamps, revamped taillamps and tweaked bumpers. The overall design is a welcome addition as it looks much cleaner now. That said, it features the same alloy wheels as the standard Hector.

The Hector Plus remains mechanically identical to the Hector in terms of powertrain choices. It features the same 2.0-litre diesel (170PS/350Nm) and 1.5-litre turbo petrol (143PS/250Nm) motor as the 5-seat SUV. Transmission options include the same 6-speed manual and 6-speed DCT. Also note that both engines will be BS6-compliant upon launch.

The feature list is also expected to remain the same. Highlights include a 10.4-inch infotainment system, i-SMART 2.5 connected car tech, Android Auto and Apple CarPlay, a panoramic sunroof, climate control, and an Infinity sound system.  We still haven't got a peek inside the Hector Plus’ cabin but we do know that the cabin will feature a black-brown colour scheme.

As for the pricing, the Hector Plus 6- and 7-seater versions are expected to be priced around Rs 1 lakh over the standard model, which starts from Rs 12.73 lakh (ex-showroom). Key rivals include the Mahindra XUV500 and Tata Gravitas.