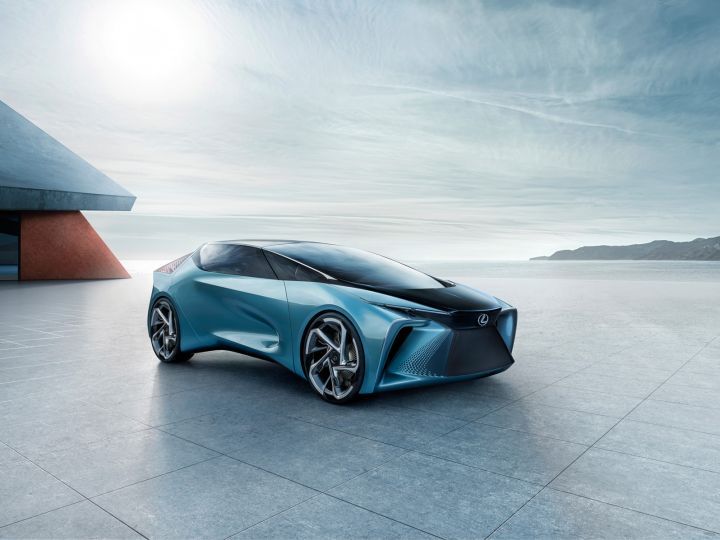 The LF-30 retains Lexus’ signature design traits thanks to the spindle-shaped illuminated grille flanked by the sleek LED DRLs. The windshield extends all the way to the rear of the concept and the LF-30 gets a smooth flowing roofline. Meanwhile, it’s gull wing doors reminds one of the Mercedes-Benz SLS AMG. Other highlights include the side windows whose opacity can be adjusted to offer occupants views of their surroundings or give them complete privacy.

Inside, the LF-30 concept comes with a futuristic dashboard that takes design inspiration from the Lexus concept of "Tazuna". Take the steering wheel that looks like a game controller for instance. Apart from steering the vehicle, it can also control the head-up display that houses functions like the audio system, drive modes and navigation. The driver also gets three displays that showcases plenty of information while looking like a futuristic game simulator. It also gets features like gesture control and augmented reality.

Meanwhile, the co-driver gets an experience that’s similar to a Business Class flight thanks to a large seat and a personal infotainment system. At the rear, the seats get artificial muscle technology that can mold to the shape of the occupants and offer reclining, relaxation and alert functions. Other highlights include a Mark Levinson sound system with speakers built into the headrest and SkyGate that uses augmented reality (AR) to display key functions on the roof, including navigation, video playback and a view of the night sky!

The Lexus LF-30 Electrified is not only luxurious but comes with a host of new technologies. The standout feature here is the Lexus Advanced Posture Control technology that regulates the electric motor’s power based on the situation. It can direct power to either the front, rear or all four wheels to offer improved handling characteristics. Then there’s the ‘Lexus Airporter' drone-technology support vehicle that’s capable of lifting your luggage from your doorstep to the vehicle’s trunk. It also comes with wireless charging technology to simplify your charging duties. Meanwhile, steering the car is now handled by steer-by-wire technology that claims to offer more precise control. What’s more? Lexus is planning to implement these features in its mainstream models by 2030.

Powering the LF-30 Electrified are four electric motors at each corner that produces a combined output of 544PS and 700Nm of torque from the word go. Thanks to these mind boggling figures, Lexus says the LF-30 Electrified is capable of completing the 0-100kmph sprint in 3.8 seconds. Top speed is rated at 200kmph. The electric motors draw power from a 110kWH battery pack and offers a claimed cruising range of 500km (WLTP claimed). Meanwhile, the battery pack supports charging speeds upto 150kW.

The Lexus LF-30 Electrified concept shows Lexus’ commitment to introduce electric vehicles with the latest technology. The carmaker plans to launch electrified versions of its current lineup and these could feature some of technology showcased in the LF-30 Electrified. The only thing that remains to be seen is if this swoopy crossover will make it to the production line or not.