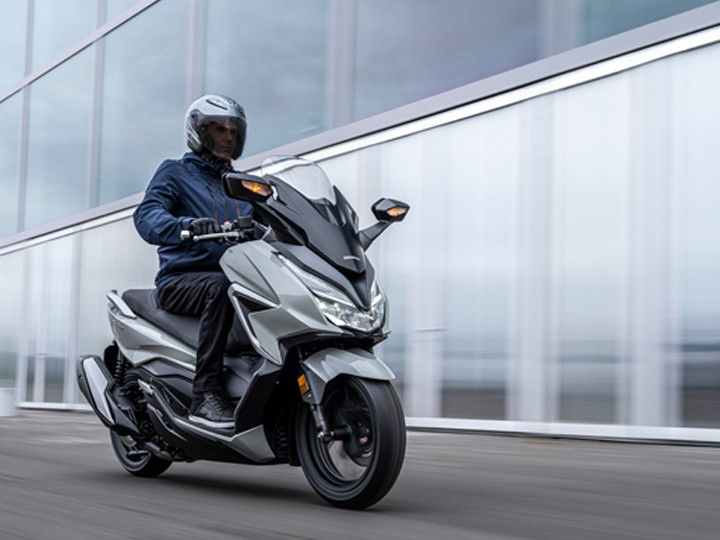 Honda has taken the wraps off the 2021 Forza 350 which replaces the smaller Forza 300 overseas. The sporty maxi-scooter gets a larger eSP+ engine offering better top speed and acceleration. It also gets a few cosmetic and feature updates.

The biggest change is the engine capacity which has gone up from 279cc to 330cc. The increase in bore and stroke means the Forza 350 makes 29.2PS at 7500rpm and 31.5Nm at 5250rpm -- 1.3PS and 4.3Nm more than the Forza 300. This is achieved by using larger throttle bodies and intake valves, revised intake and exhaust ports, a lighter crankshaft, and a freer-flowing exhaust.

Honda says the Euro 5-compliant ‘enhanced Smart Power+’ 330cc engine is not only more powerful but also more fuel-efficient than the Forza 300. With rider aids such as dual-channel ABS and traction control on board, it will be the most tech-laden scooter in India.

Also Read: Honda Steps Up Its Maxi-scooter Game With The Forza 750

Other notable updates include a revised emergency stop signal (ESS) along with its all-LED lighting system that rapidly blinks when you brake hard. The electrically adjustable windscreen now offers up to 180mm of adjustability -- 40mm more than before. The earlier charging socket on the front apron has been replaced with a USB charging socket in the glove box.

It also features keyless ignition and a semi-digital instrument console with two analogue dials and a central LCD screen with readouts such as average fuel consumption, odometer, tripmeters, and even maintenance alerts.The seat height of 780mm should be perfect for shorter riders. As for the underseat storage space, it can accommodate up to two full-face helmets.

Honda Motorcycles India had earlier revealed its plans of launching the BS4 Forza 300 in India. Heck, it even managed to sell a few units of the maxi-scooter here. However, with the introduction of the Forza 350, Honda may change its gameplan and bring in the larger, more powerful Euro 5-compliant scooter here later this year, instead of the Forza 300.