How does Hyundai’s latest SUV stack up against the Tata Safari and MG Hector Plus? Let’s find out 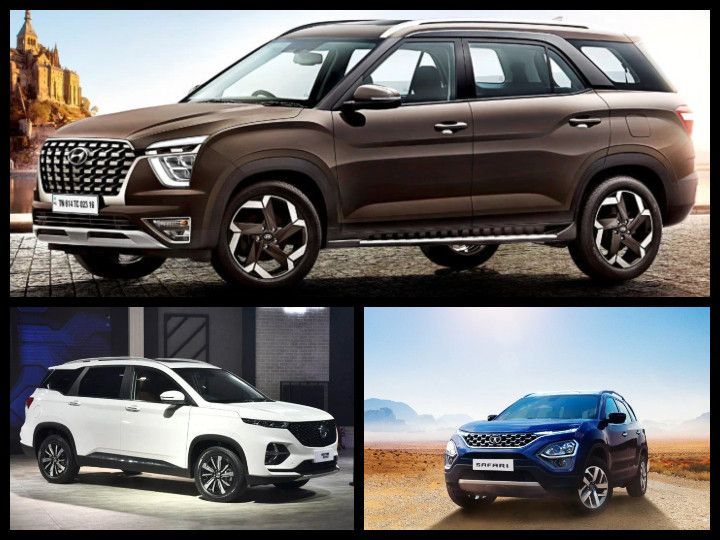 Hyundai’s newest SUV, the Alcazar, is the brand’s foray into the three-row midsize SUV segment consisting of established rivals like the Tata Safari and MG Hector Plus. How does Hyundai’s latest SUV stack up on paper when compared to its rivals? Let’s find out:

Save for the wheelbase, the Alcazar is the smallest in its segment in all other aspects. The MG Hector is the longest while the Safari is wider and taller than its rivals. That said, despite its smaller footprint, the Alcazar manages to edge its rivals when it comes to boot space with all three rows up.

*only in 6-seater variant

*can be optioned with mild-hybrid

The Alcazar’s 2.0-litre naturally aspirated engine has the better power figures on paper. But the Hector Plus’ turbocharged unit is torquier. Also, the Hector’s unit can be optioned with mild-hybrid tech that provides short boosts of power during hard acceleration.

The Alcazar’s 1.5-litre diesel engine, in contrast, has a 55PS and 100Nm power deficit when compared to the Safari’s and Hector’s 2.0-litre FCA-sourced engine.

A 6-speed manual gearbox is offered as standard for all three SUVs. However, it’s the Tata and Hyundai that provide an optional automatic gearbox for their diesel engines.

The Alcazar might be the smallest SUV and its diesel engine’s on-paper performance numbers isn’t anything to write home about. But the Hyundai SUV trumps its rivals with a lengthy feature list and an usable boot. We’ll be comparing the Alcazar and its rivals for a detailed road test. So stay tuned.