Here Are All The Honda Two-wheelers Coming In 2021 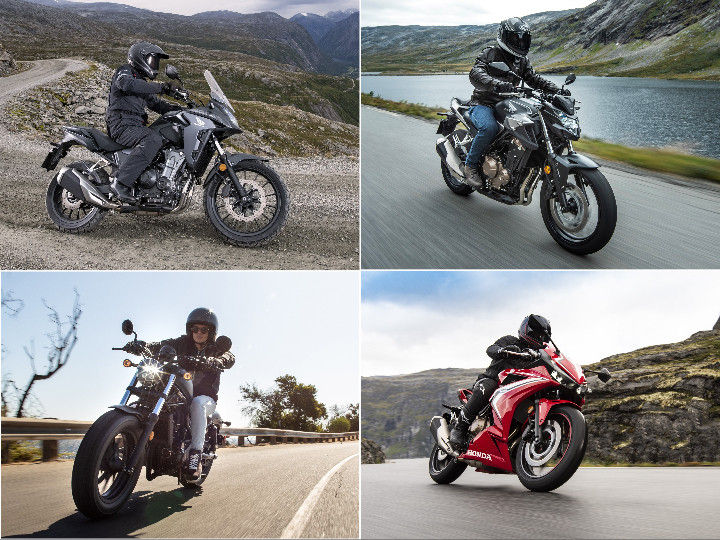 Honda gave us a few pleasant surprises in 2020, with interesting new bikes such as the Hornet 2.0 and H’ness, but it also threw us a few underwhelming products such as the Activa 6G. For the upcoming year, it’s got a whole new (and pretty big) toybox coming our way. So here’s a list of all the upcoming bikes you can expect from Honda in 2021:

It was initially slated to launch this year, but Honda’s 500cc twin-cylinder range faced a setback due to COVID. Don’t worry, it’s definitely still on the cards and could now launch in 2021. This will include the CBR500R sports bike, CB500X adventure tourer, Rebel 500 cruiser and CB500F naked roadster, and we expect some degree of localisation which should make the bikes relatively well-priced.

The CBR650R was offered in India before BS6 emission norms kicked in, and we expect it to make a comeback once it receives its Euro 5 update sometime in 2021. Along with this, Honda is also likely to bring in its naked sibling, the neo-retro CB650R, which will be powered by the same motor. But that’s not all. We suspect Honda is also working on a larger H’ness, probably something in the 650cc range, to take on the mighty Royal Enfield 650s. There’s a good chance we could see this new bike break cover in 2021.

Besides the smaller Rebel 500, there’s a pretty high probability of Honda launching the flagship Rebel 1100 here in India. It’s got all the cruiser ingredients, with that low, long form factor and a big-twin motor borrowed from the Africa Twin CRF1100L. Heck, it’s even available with a semi-automatic DCT option - perfect for a cruiser! The Africa Twin engine is Euro 5/BS6-compliant and the Rebel should have no hurdles on the emissions front.

Another Honda big bike that was offered in the BS4 era was the CB1000R, the first from Big Red to feature the new neo-retro design language. Fortunately, this bike has already received its Euro 5 update overseas, along with a few other updates and the introduction of a Black Edition. So it’s only a matter of time before Honda reintroduces the bike into the Indian market as well.

That neo-retro styling filtered down to the CB300R, which was also offered in India until March this year. The 300 is yet to receive an emissions update, but we expect it to arrive sooner rather than later, following which the CB300R will make a comeback. We hope Honda can also increase the localisation levels so it can continue to compete with the likes of the BMW G 310 R and KTM 390 Duke in terms of price.

On the scooter front, Honda has already got its entire 110cc and 125cc portfolio in place, and we hope 2021 will see the brand grow its lineup into the 350cc segment. It already has the perfect tool for the job, in the form of the Forza 350. Honda had earlier sent the Forza 300 to dealers in India to gauge market response. From what we understand, the response was quite positive, meaning there is a good chance of its successor, the Forza 350 officially launching in 2021. But will it beat this other incoming 300cc scooter to become India’s first? Only time will tell.

The big brands may have been a little late to the electric party, but now they’re all starting to get pretty serious about the electric two-wheeler game. Honda is no exception, and we believe it is readying for India an e-scooter based on its PCX Electric. It hasn’t yet been spotted testing, but then a new Honda rarely ever is. So there is still a possibility that we could see a Honda e-scooter unveiled in 2021.