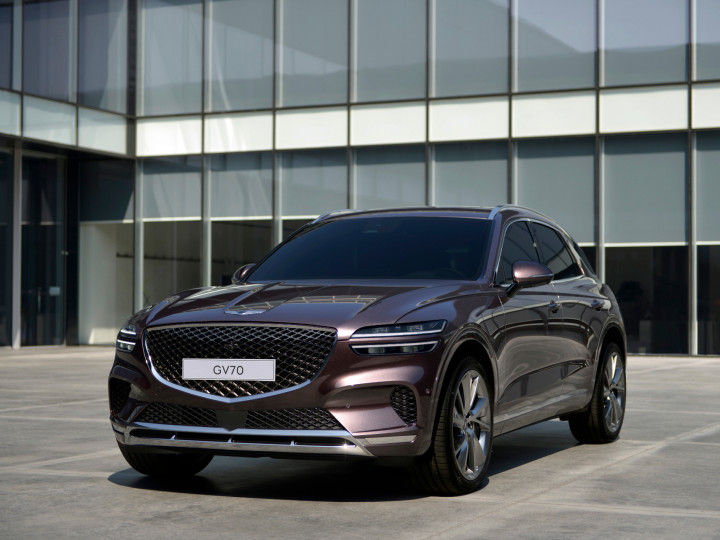 Genesis, Hyundai’s luxury arm, has taken the wraps off its second SUV, the GV70. It is Genesis’ entry-level SUV and takes on the likes of the BMW X3, Mercedes-Benz GLC and the facelifted Audi Q5. There’s also a Sport model for those who want an aggressive looking GV70.

The GV70 follows Genesis’ ‘Athletic Elegance’ design philosophy and looks taut. It will appeal to those who want to stand out from the German crop of popular SUVs. Our favourite part, without a doubt, has to be its swooping profile. A prominent shoulder line, which Genesis likes to call ‘Parabolic line,’ flows from the headlights to the rear. Looks neat! Even the integration of the rear quarter glass in the sloping C-Pillar is tastefully done and looks athletic. The stance is also spot on thanks to the large wheel arches which are nicely filled by the large alloy wheels.

Up front, though, it is typical Genesis with a large single-piece grille flanked by sleek LED headlamps. Even the rear tail lamps mimic the headlamps’ design. Full marks to Genesis for the neat execution, though.

The interior design is also quite different from the German trio. The main highlight is the minimalistic central console with the floating infotainment system and chunky climate control units. A hint of inspiration from Audis can be seen in the faux AC vents running through the wraparound dashboard. The Sport variant gets a red finish instead of the Plum colour and three-spoke steering wheel.

The GV70 is based on Genesis’ rear-wheel drive platform, but it can be had with an optional all-wheel drive system. Detailed technical specs haven’t been revealed yet, but reports suggest the GV70’s platform will borrow plenty of bits from the 2021 Tucson. It could be powered by the G70’s 201PS 2.2-litre diesel and 252PS 2.0-litre turbo-petrol engines.

The Genesis GV70 will go on sale in the Korean market in the coming weeks. Hyundai is rumored to be toying with the idea of bringing Genesis luxury cars to India, but even if it does, that’s still a while away. The GV70 could be the perfect debut car for India as its rivals -- the GLC and X3 -- have a fair share of attention in the country.