Which of these off-road capable Triumph motorcycles is the right choice for you? 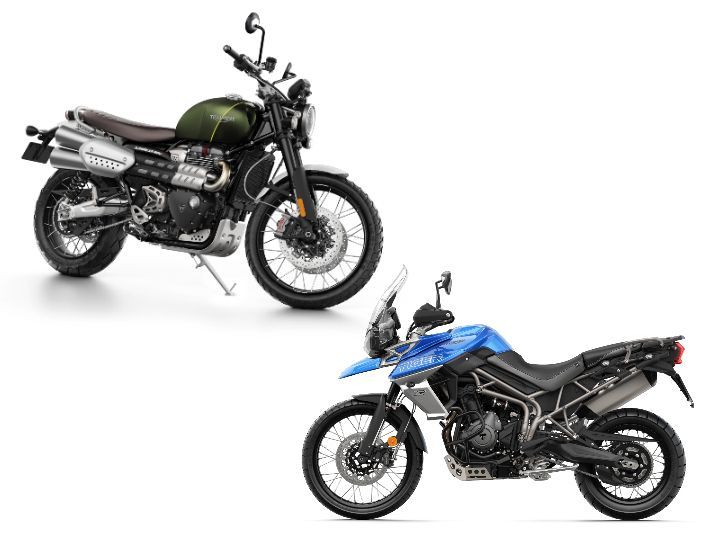 By bringing the Scrambler 1200 XC to India, Triumph has given off-road enthusiasts a different flavour in the now-so-popular adventure segment, which is highly dominated by the Tiger 800. And when it comes to off-roading, there are not many motorcycles in the middleweight segment that are better at the game than the Tiger 800 XCx. This immediately pops up a question - which one is the right Triumph for your off-roading needs?

Place the two motorcycles alongside and you will immediately notice that the Scrambler 1200 XC is a barebones off-roader. The classic Bonneville design now looks rugged and ready for battle. It is a jacked-up Thruxton R with many top-spec components that are not even found on the Thruxton itself. Crash protection is minimal - the only standard protection fitment is the aluminium bash-plate - and that could deter a few enthusiasts in taking it off tarmac in its natural state.

The Tiger 800 XCx, on the other hand, looks pretty intimidating with its bulbous fairing and twin headlamps. With its top-heavy design and inline 3-cylinder motor, the width becomes even more apparent. You do get knuckle protectors in addition to the metal bash-plate, but here there’s more that can get damaged than on the Scrambler 1200.

Perch yourself on either and you will instantly feel that the Scrambler is more accessible. The narrow seat-tank intersection area makes it easier for riders to reach their feet on the floor. You get even wider bars on the Scrambler than on the Tiger, which offers even more leverage when the going gets tough. Start riding and you will feel more in control on the Scrambler 1200 thanks to its low centre of gravity, compact dimensions and more favourable rider touch-points.

The Tiger has its own set of benefits too. It has a sharper steering geometry. This allows it to be highly agile on narrow trails, masking its weight quite cleverly. Even when you want to steer clear of an obstacle, the Tiger is more responsive to your inputs.

The way each of these bikes put their power down is very different. A simple look at the numbers and you can tell that the Scrambler 1200 is the hard hitting T20-batsman who only knows how to hit the ball out of the park. The Tiger 800 is the more sensible hitter, knowing that fun is in lasting it out as long as possible. The state of calmness with which the Tiger crosses over obstacles is unmatched in the segment while the Scrambler has you alert at all times.

The foundations of the Scrambler 1200 are quite solid. The stock suspension tune might be on the stiffer side for off-roading but you can sort it out according to your needs as both ends feature fully-adjustable units. The Tiger’s WP units are not as sophisticated as the Scrambler’s, missing out on a bit of adjustability. But the suspension is a lot more progressive and easy going.

Brembo calipers did make a world of difference on the current-gen Tiger 800 but the units are no match for the supremacy of the M50s found on the Scrambler 1200. These have been lifted off from the Street Triple RS with the bite dialled down a notch for off-roading. On both bikes, you can switch off ABS intervention on the rear wheel in Off-Road riding mode.

Again, when it comes to the wheels, the Scrambler 1200 has the better off-roading setup. Both might get 21-/17-inch spoke rims but the 1200 gets sidewall-laced aluminium rims which allow you to fit tubeless tyres. And we all know how handy this is when you have a puncture.

Who should get what?

The Tiger 800 XCx is like a loveable pup, it will do everything that you ask of it and allows you to get away with misbehaviour. The top-heaviness can be a bit unnerving on the trails but she makes up for it for the most part of the trails. And the Tiger’s touring-proficiency is unmatched by the Scrambler. This makes it a very versatile, all-round motorcycle.

However, if you are only looking to buy an adventure motorcycle for its off-roading capabilities, you should definitely consider getting the Scrambler 1200 XC. This bike can really take a bashing and come out wanting for more action. The abundance of low-down torque means the fun starts with just a simple twist of the wrist. Barring its shortcomings in the touring department, the Scrambler 1200 is also a hoot around the twisties. We just wish the upswept exhaust had better heat insulation.