Which one of these supersport motorcycles deserves your attention? Find out in our detailed image gallery 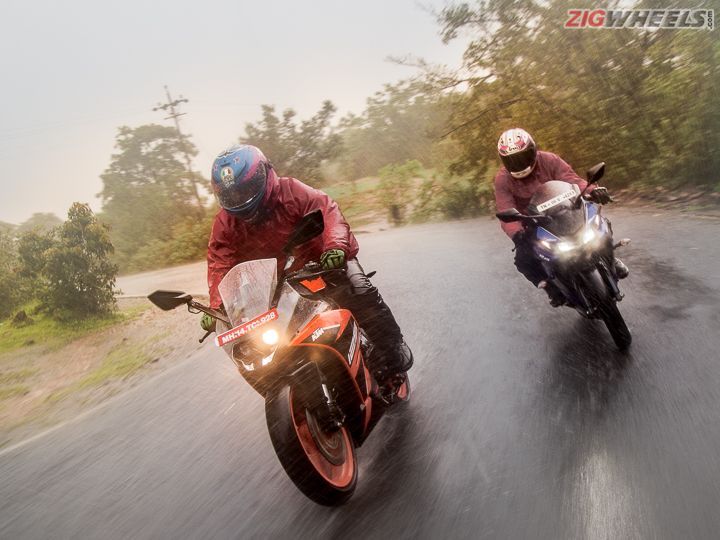 Until a few months ago, the Yamaha R15 V3.0 was the go-to option for beginners who wanted to enter into the world of entry-level supersport bikes. However, the R15 V3.0 has a new competitor, the KTM RC 125. So should you spend around Rs 7,000 more and get yourself a ticket to the world of KTM or are you better off with the Yamaha R15 V3.0? We help you to choose one via our detailed image gallery.

The RC 125 is KTM’s supersport machine for the freshly licensed motorcyclist. And the other one is the stalwart in the learner’s segment. The Yamaha YZF-R15 is a motorcycle that needs no introduction as it made supersport bikes accessible in India.

If it is grabbing eyeballs you are concerned about, the KTM does have a stronger pull. Maybe it has to do with the front dual projector scowl or the sharp fairing which makes the RC 125 look terrific.

The R design DNA is very much present on the R15 V3. It might not look as rounded as its predecessors but it looks very much like an R1 or an R6. That said, the colours of the R15 V3 are not very catchy.

With the addition of Variable Valve Actuation, Yamaha has made the R15 V3.0 an all-rounder. It is no longer a peaky motorcycle fit for spirited riding only.

The KTM RC 125 packs the most powerful 125cc motor (14.5PS and 12Nm) that you would find on any two-wheeler in India, but isn’t that like stating the obvious?

At 3.4 seconds, the R15 is over two and a half seconds quicker to 60kmph. And it extends its lead to around 7 seconds when it comes to sprinting from 0-100kmph.

Even in in-gear roll-on acceleration, the R15 is seriously quick. It is 1.5 seconds quicker in the 3rd gear 30-70kmph test and this gap grows to 3.5 seconds in the fourth gear 40-80kmph test.

The 155cc motor which churns out 19.3PS gets a slip and assist clutch which makes for light clutch action and smoother downshifts. Forget finding this on the RC 125, KTM only offers this equipment on the RC 390 and the 390 Duke.

The RC 125 has a taller saddle height, making it rather difficult for shorter riders to flat-foot the bike. Also the rider footpegs are relatively higher. Arriving at traffic stops, it will take a bit more effort to get your feet on the ground.

This extreme forward-arching aggressive stance is great for weekend thrills but not so much for daily commutes. While you might not feel it at first, over time the R15 will cause severe wrist, back and neck pains.

The sporty setup with racy ergonomics make for a delightful bike in the corners. It is not as agile or as easy to flick from one side to the other as the R15, but it is super stable.

The India-spec R15 gets a conventional front fork instead of a USD unit. But it is razor sharp, almost too sharp. Also, since it weighs 12k lighter than the RC 125, changing directions does not take much effort either.

Outgrowing the R15 in size might take a while but as a daily runner, you will surely ask for something less harsh. If the focus is to get your basics in place for sport riding then the brilliant engine (more powerful, more tractable and more efficient than the RC 125) and the sharp riding dynamics provide a solid foundation